Dongdaemun's 20,000 White Flowers: A Garden By Day, A Galaxy Of Stars At Night 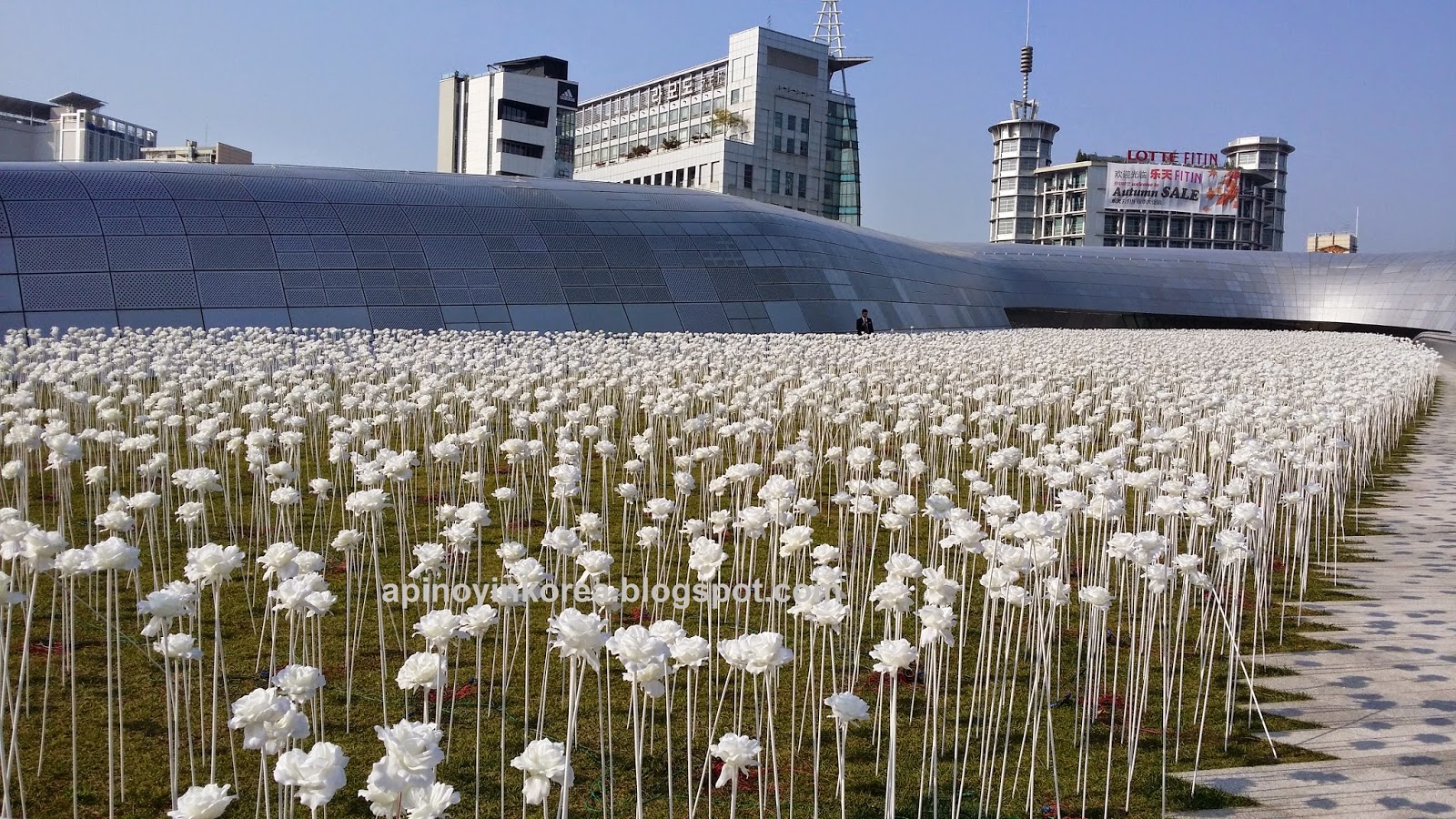 While most passers-by are reminded of a space ship when they see up close the Dongdaemun Design Plaza (DDP), I, on the other hand, am reminded of the Incheon International Airport. Sometimes, when I pass by the DDP, I always wonder why there are no planes landing or taking off. Ha-ha-ha! 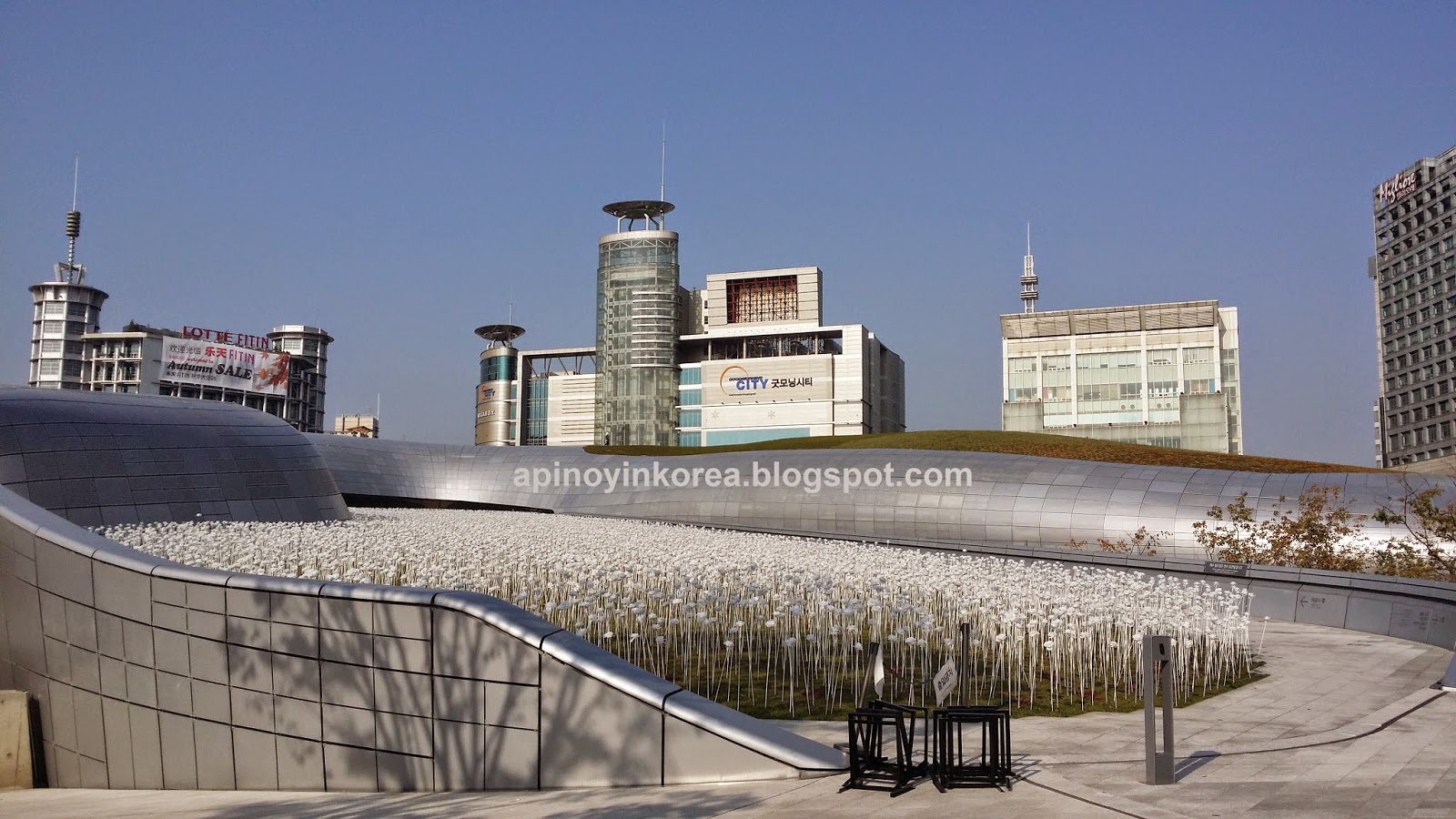 (There was no one else at the Grass Hill!) 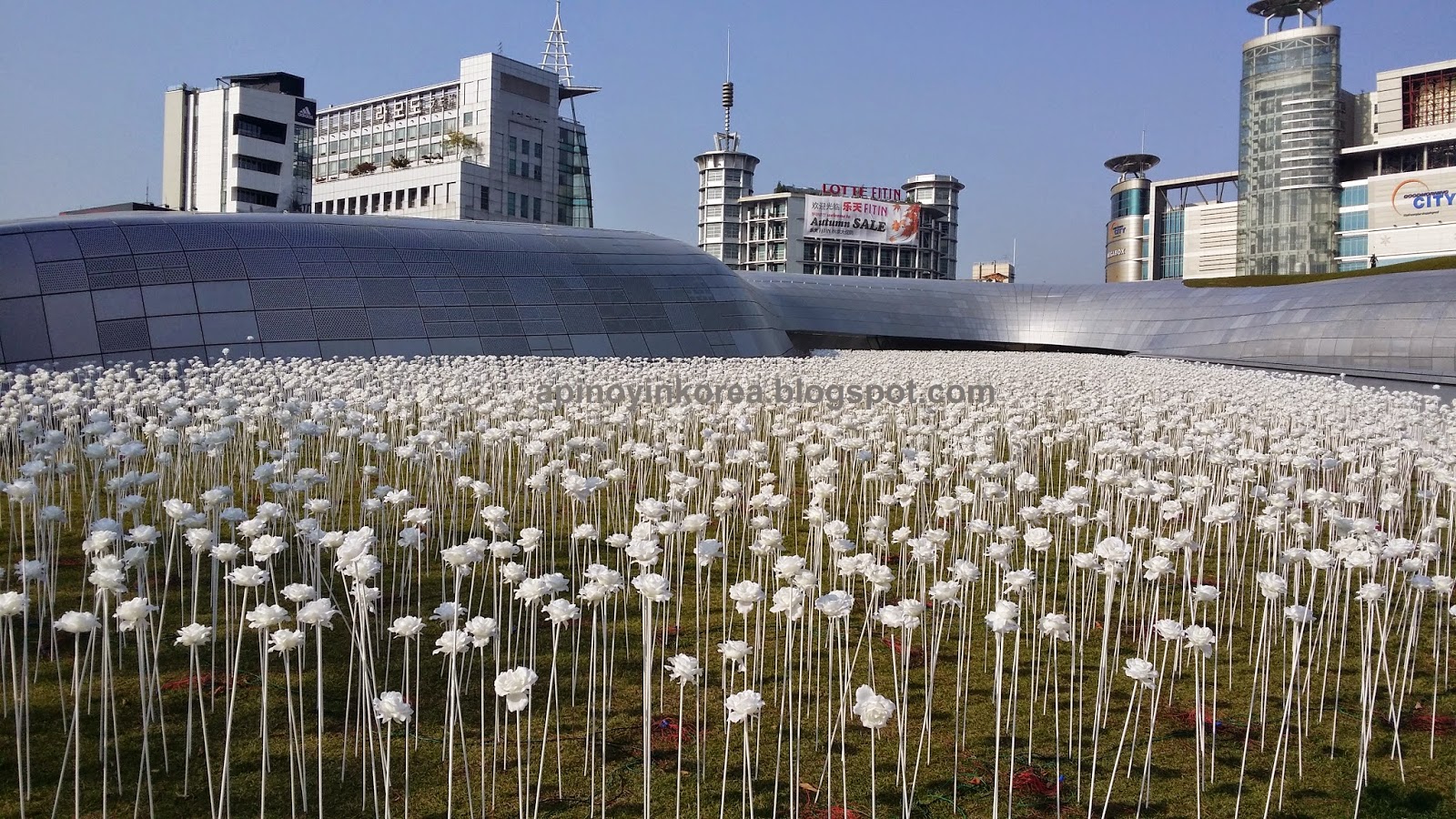 And behind the DDP's dome is an installation which has become very popular at night. If you take a short walk from Exit 1 of the Dongdaemun Culture and History Park Station, and follow the length of the Plaza, you'll end up at the Grass Hill area of the DDP, which is currently littered with white flowers whose blooms actually contain LED lights.

They turn the lights on from sundown until 10PM and according to the security guard I asked, they number 20,000. I'm not sure if he actually counted all of them, but since he works there, he must have had all day to do so. 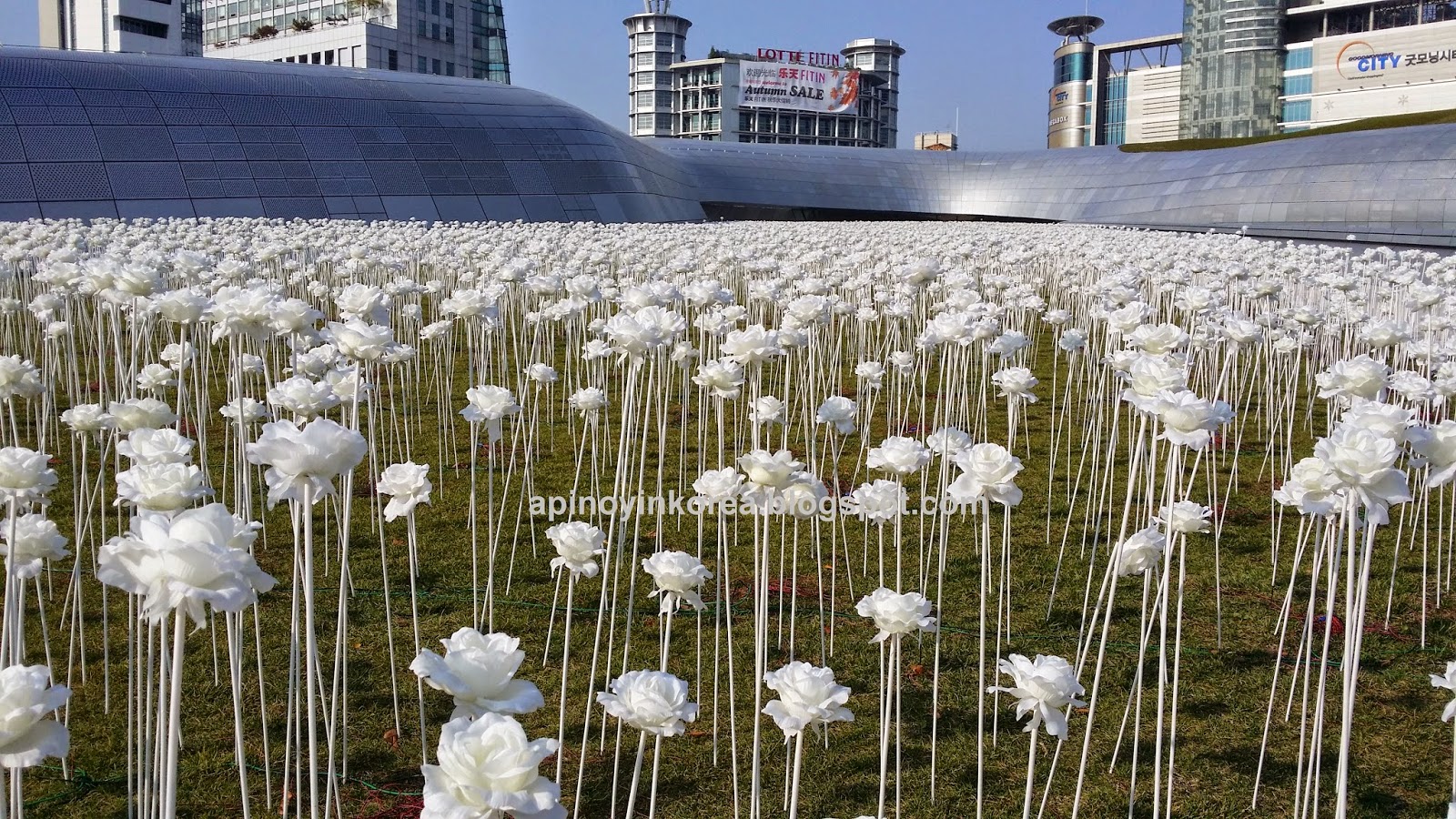 One Saturday morning, straight from my tennis matches in Hannam-dong, I took the Blue Bus 420 going to the Dongdaemun's bag market. But since I heard about this installation, I decided to make a detour and take a peek at the white flowers.

Under the 10AM sun, the thousands of white flowers looked pristine, immaculate and well, white. With the dome as their background, the rows and rows of flowers looked like a real garden with real flowers, whose blooming seemed to have been perfectly synchronized to my visit that morning. 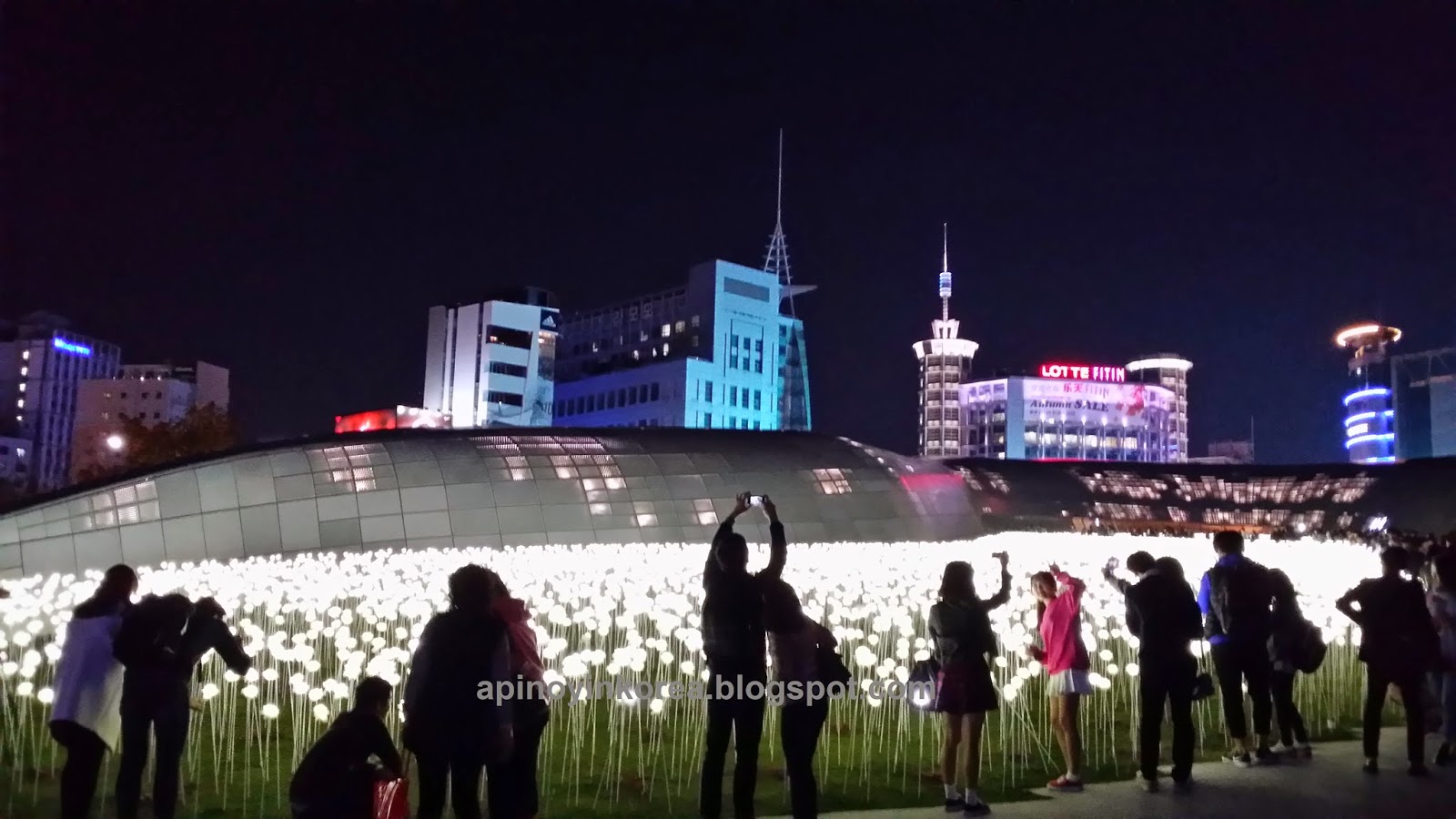 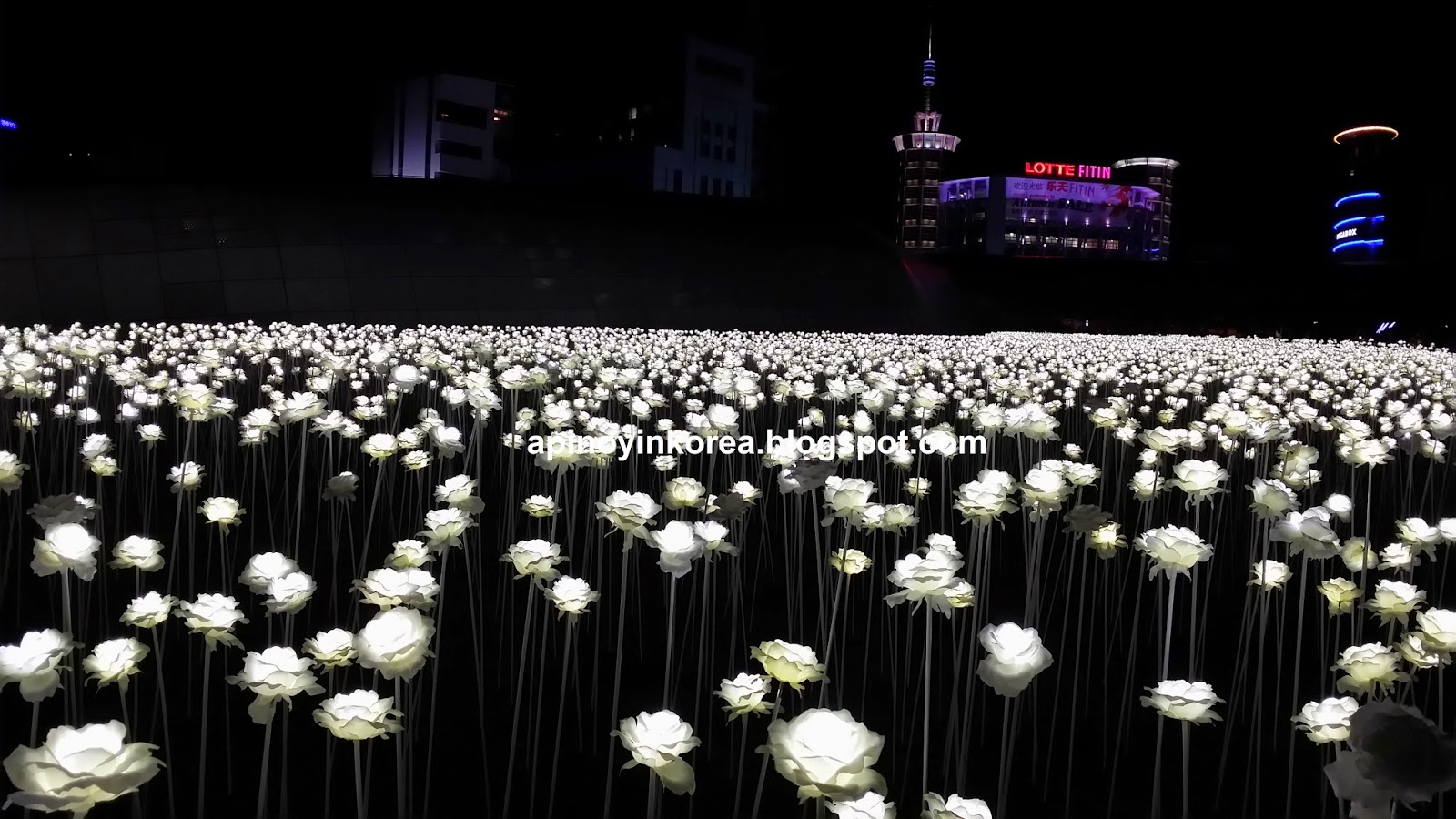 I stood there for a moment, totally impressed with the postcard-worthy sight before me. Even with my legs tired from running on the tennis court earlier, I decided to walk around the 'garden' and take photographs. Although I was joined that early morning by two ajussis, I was the only tourist of the three; the two were there to repair some wiring for the flowers.

I left the white flower 'garden' after a few shots, but decided to return during the night when the flowers are lighted. 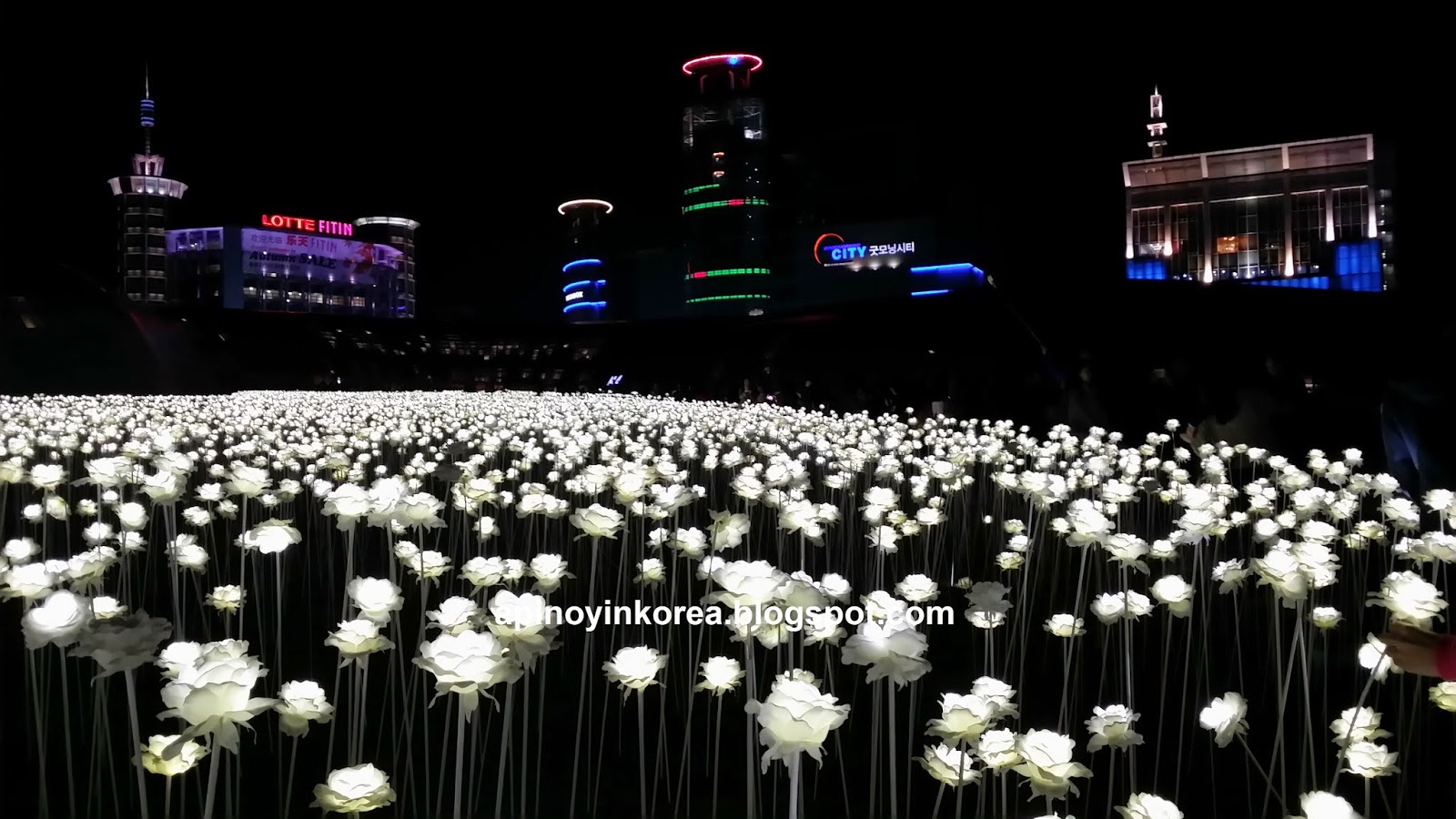 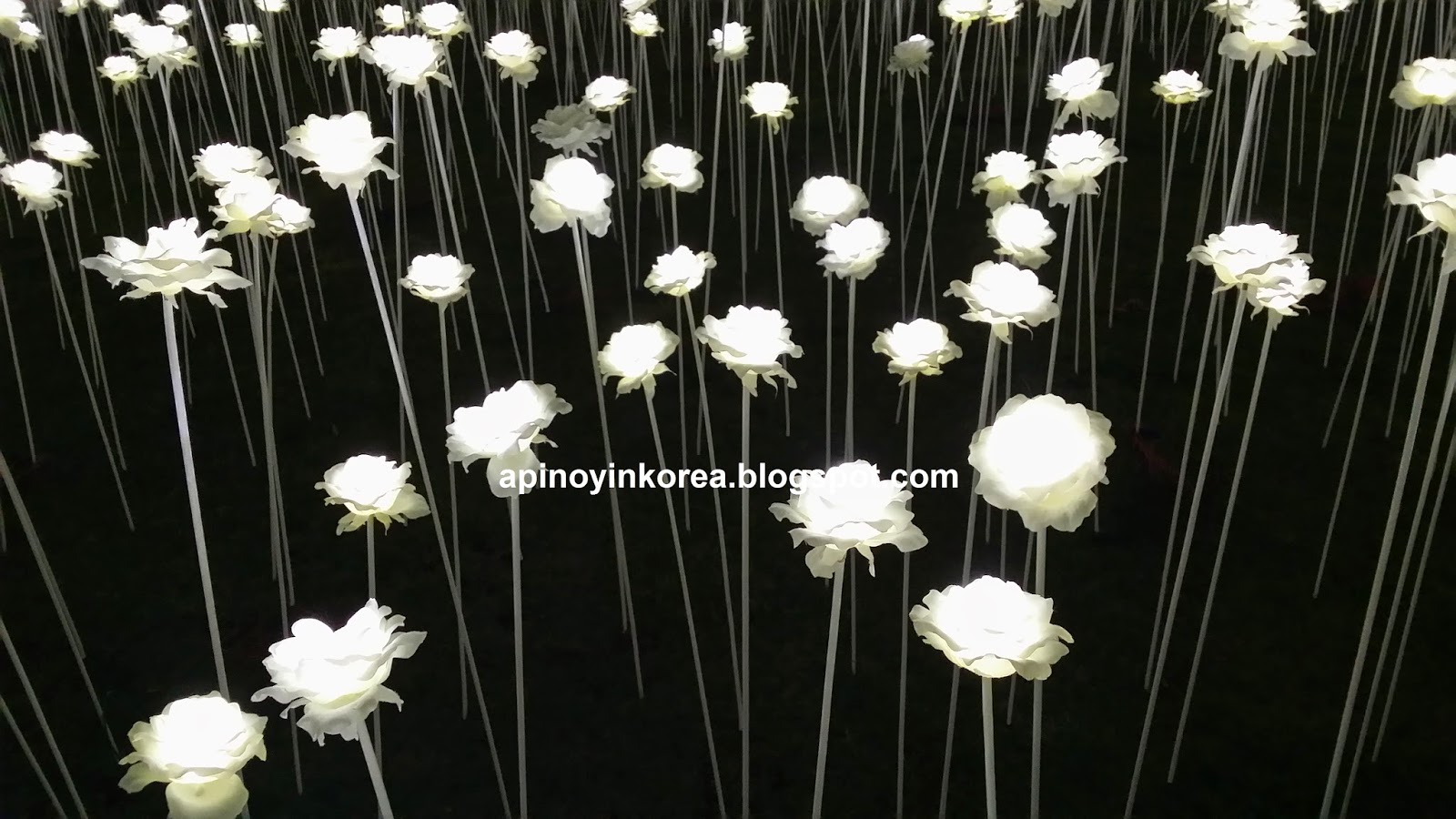 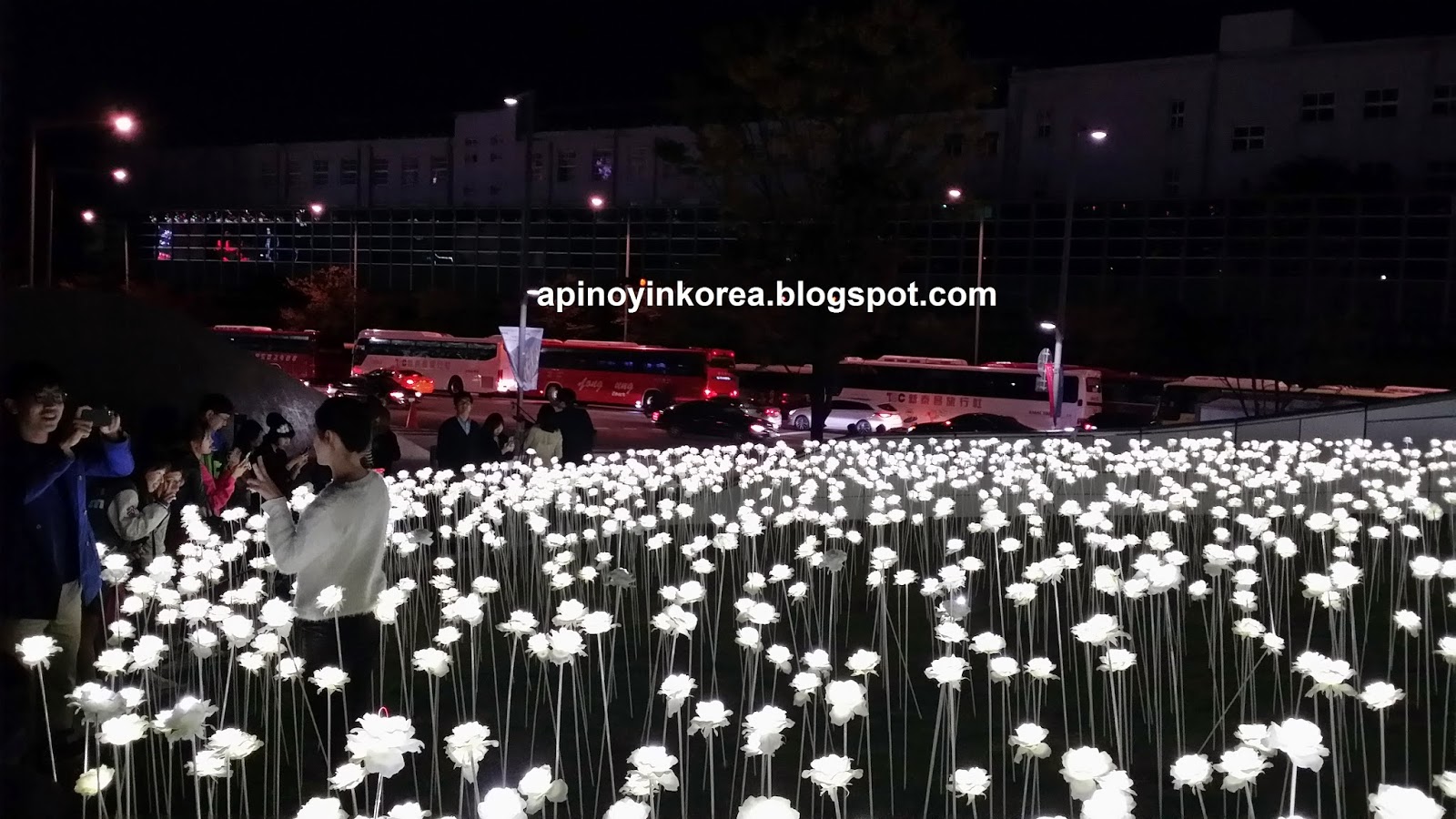 (A woman posing inside the 'garden'
even though it's prohibited)

And on the evening I returned, I wasn't the only tourist around. This time, the Grass Hill became a selfie-spot with lots of couples taking their photos with the thousands of LED lights emitting from within the blooms of the flowers. From afar and in the darkness, they all look like a galaxy of stars minus the twinkling and the Big Bang theory.

Since the flowers are planted close to each other, entering the garden is prohibited to avoid breaking the stems. Although there's a sign telling visitors to refrain from doing so and with a security guy trying to enforce it, there are still some hard-headed people who tried to make their way a few meters inside so they could have their photo taken. 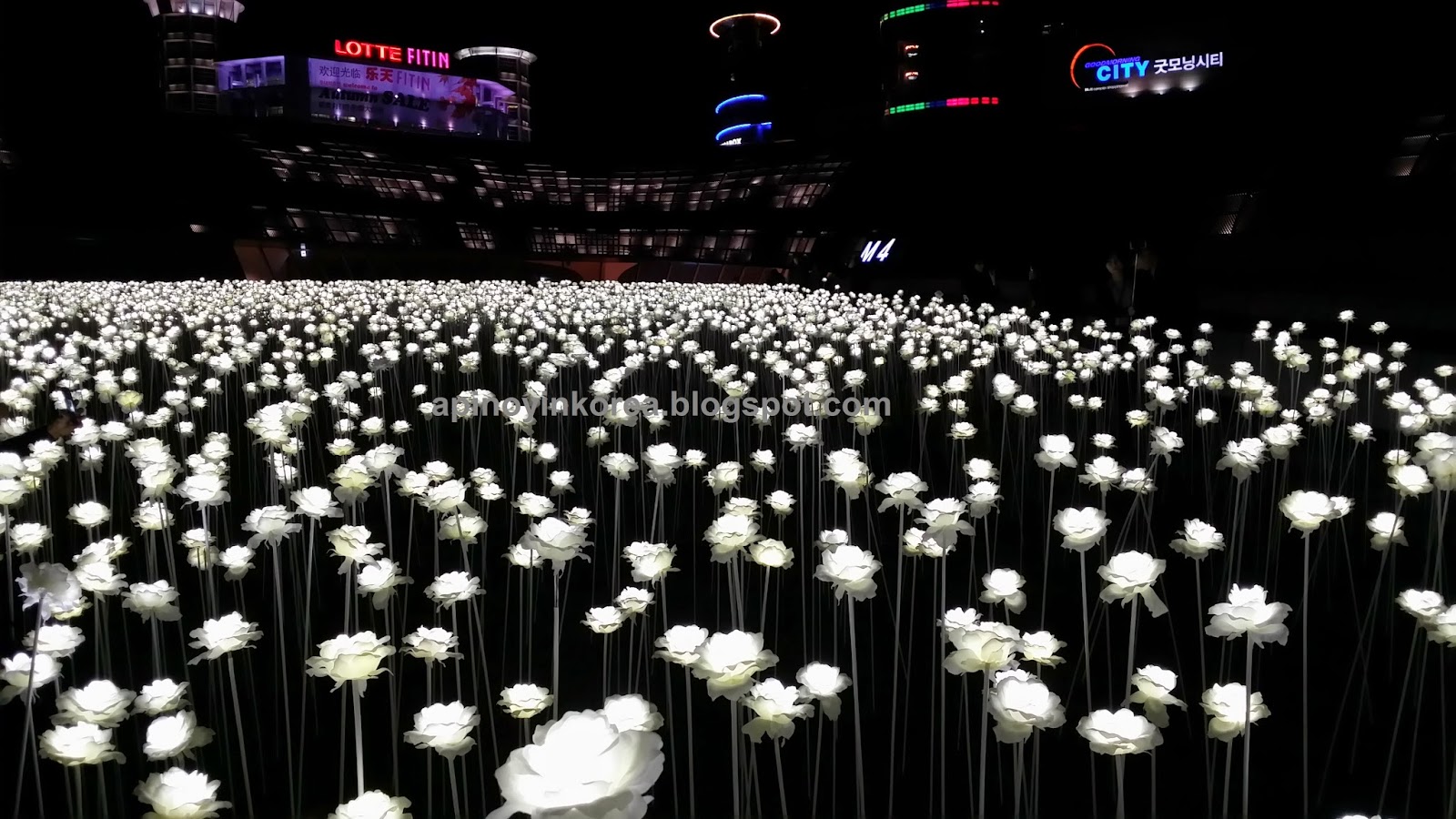 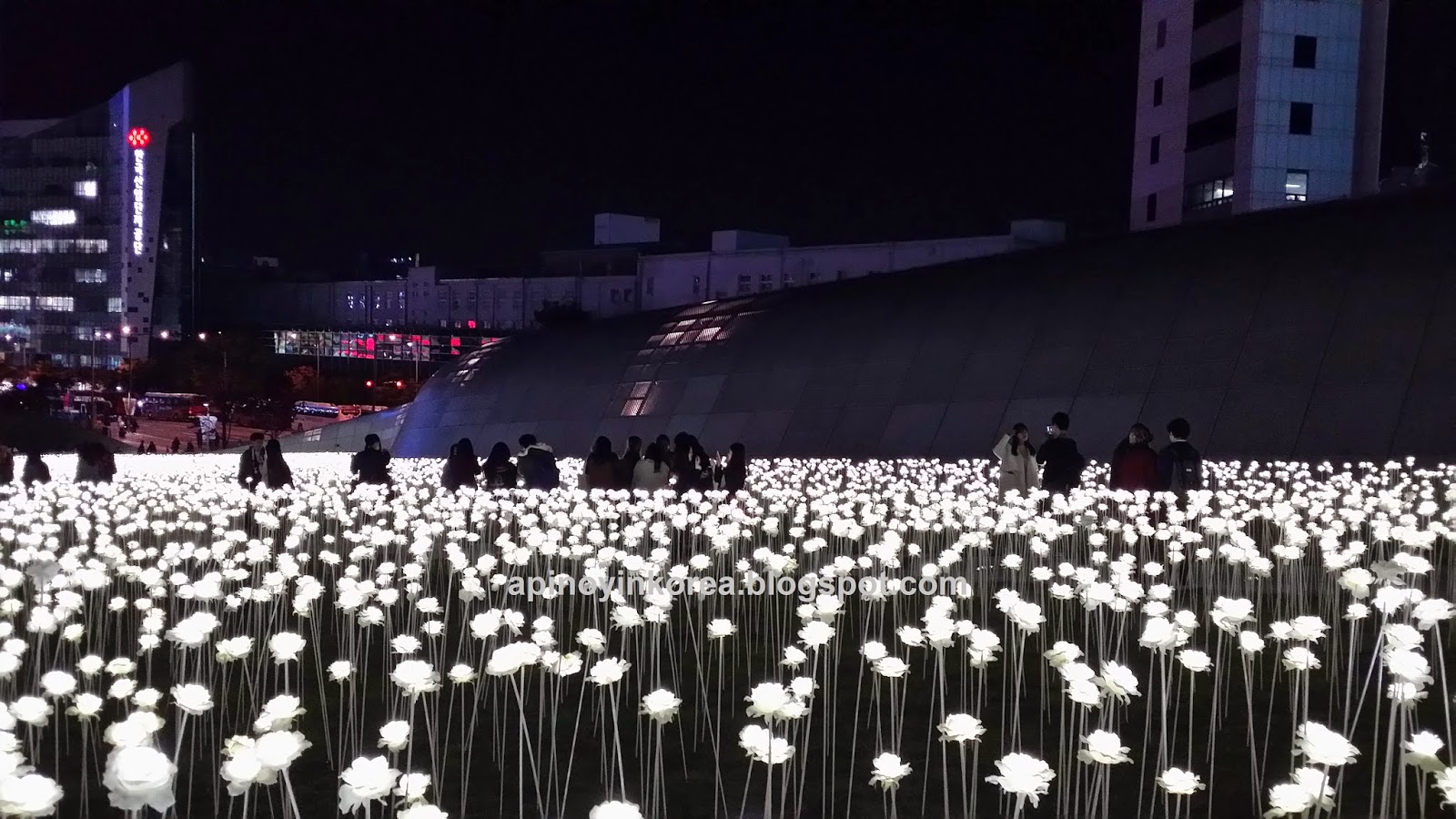 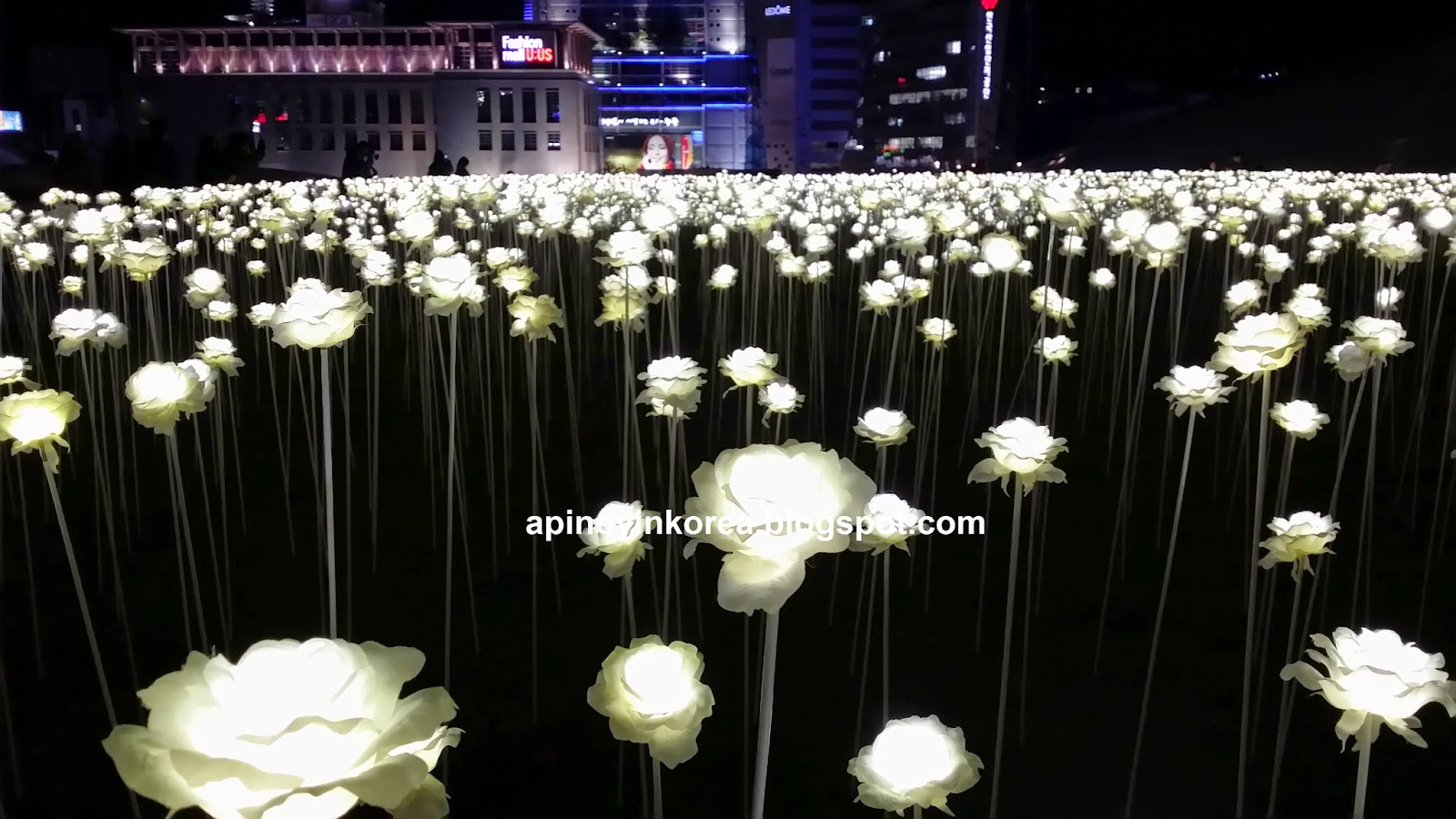 I don't know who 'planted' all these white flowers. But whoever they were, it must have been a huge task of not only filling up the spots with thousands of stems, but also arranging all the wirings for the LED lights on each bloom. They were not only horticulturists; they were also electricians! 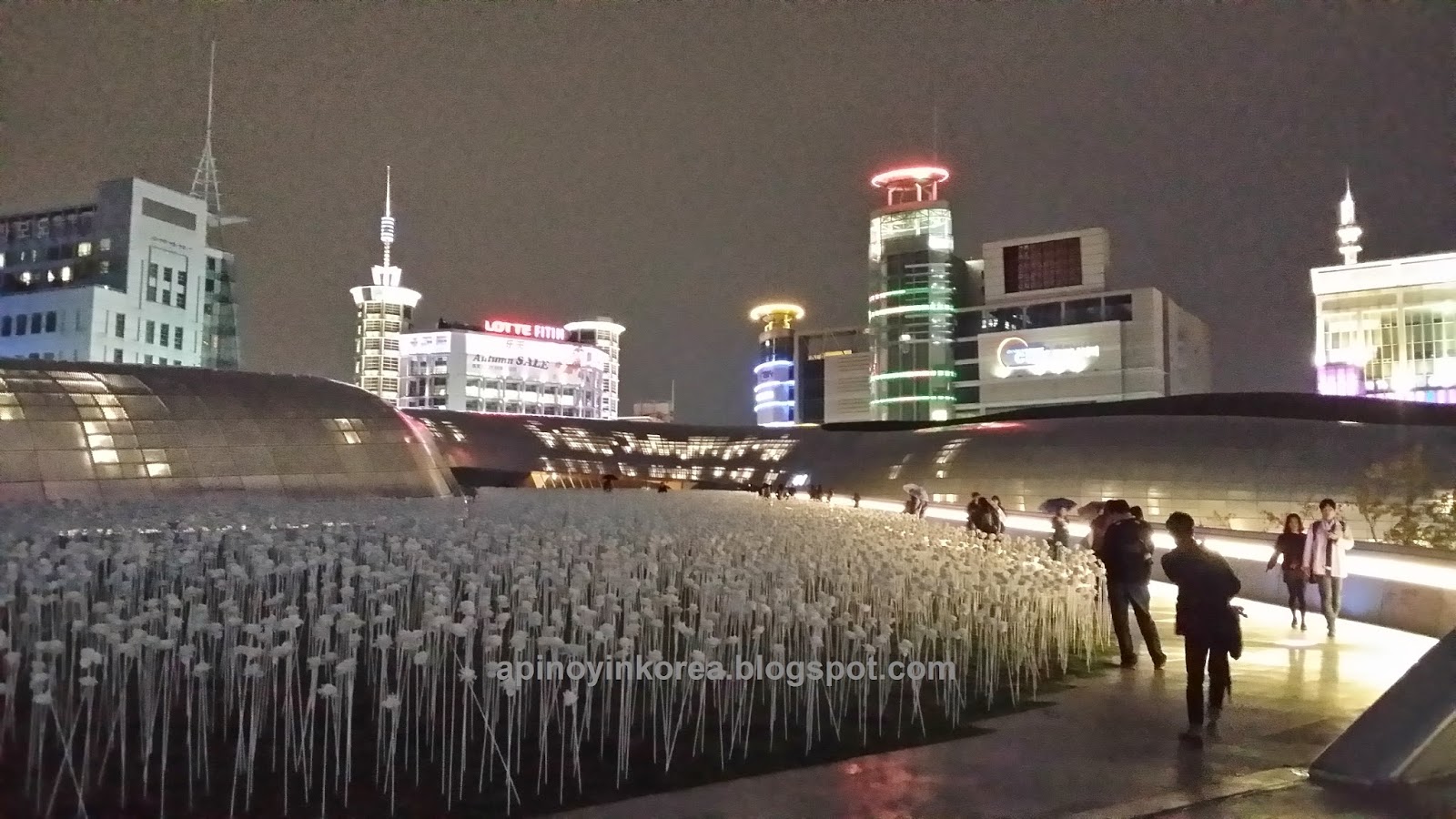 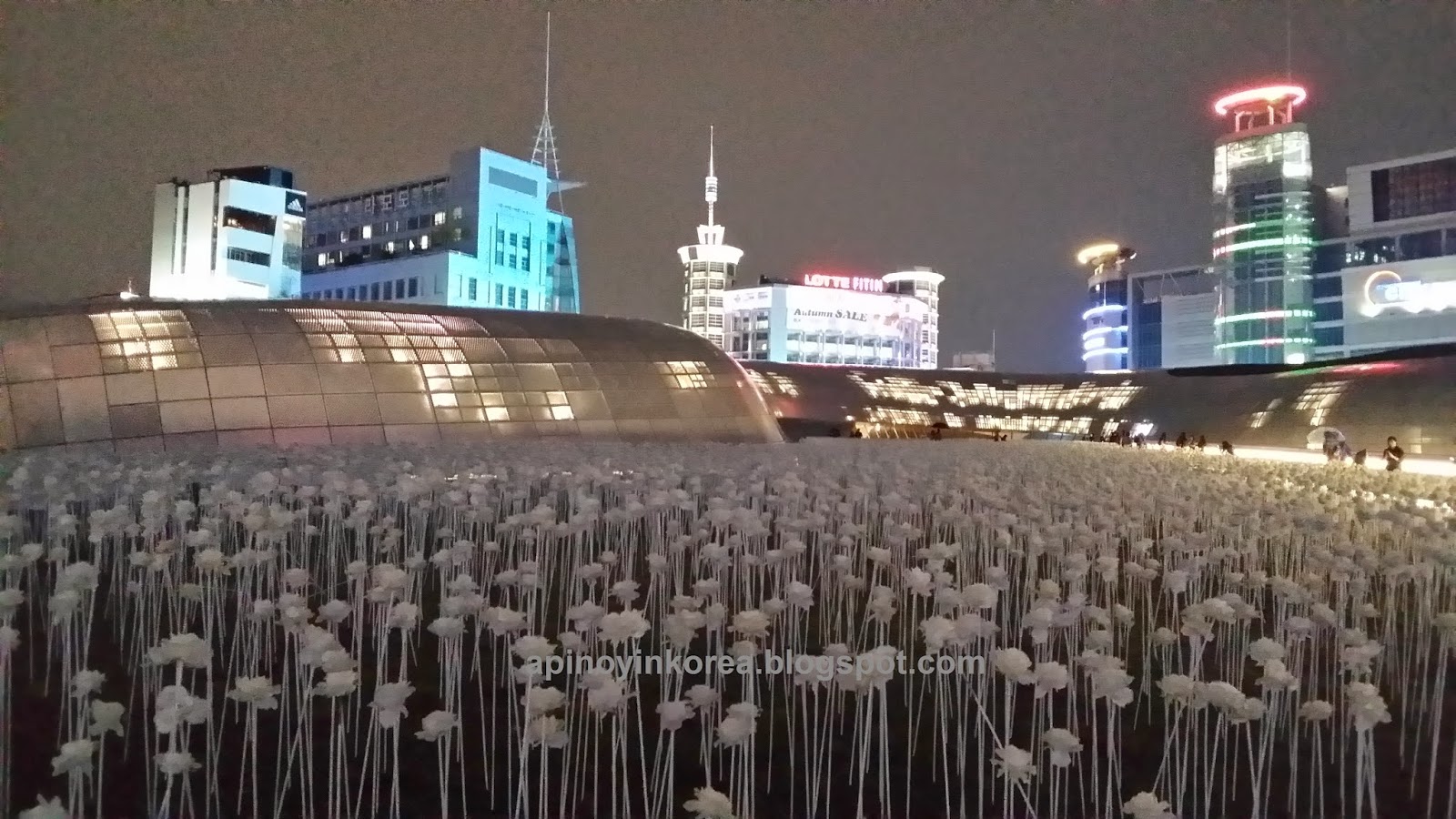 So, before it becomes really cold, you should visit the white flower 'garden' at the Dongdaemun Design Plaza during the day; and if you have time at night, make a return trip to be amazed at the thousands of glowing white flowers in the dark. 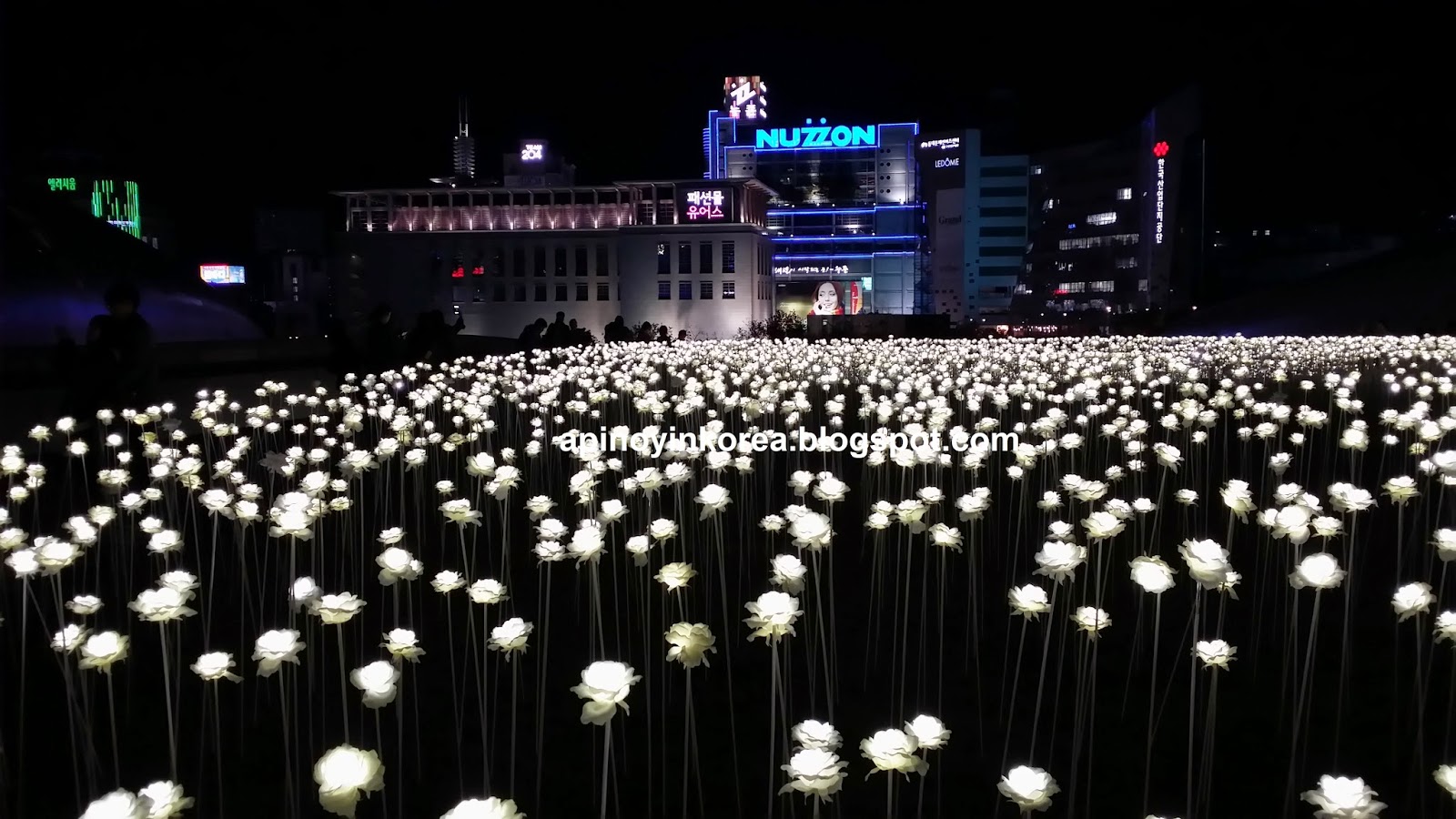 I think the original idea of the installation was meant to impress at night. But under the morning light, the 'garden' on DDP's Grass Hill looks even more impressive. After all, isn't it nice to have a garden that doesn't need watering? 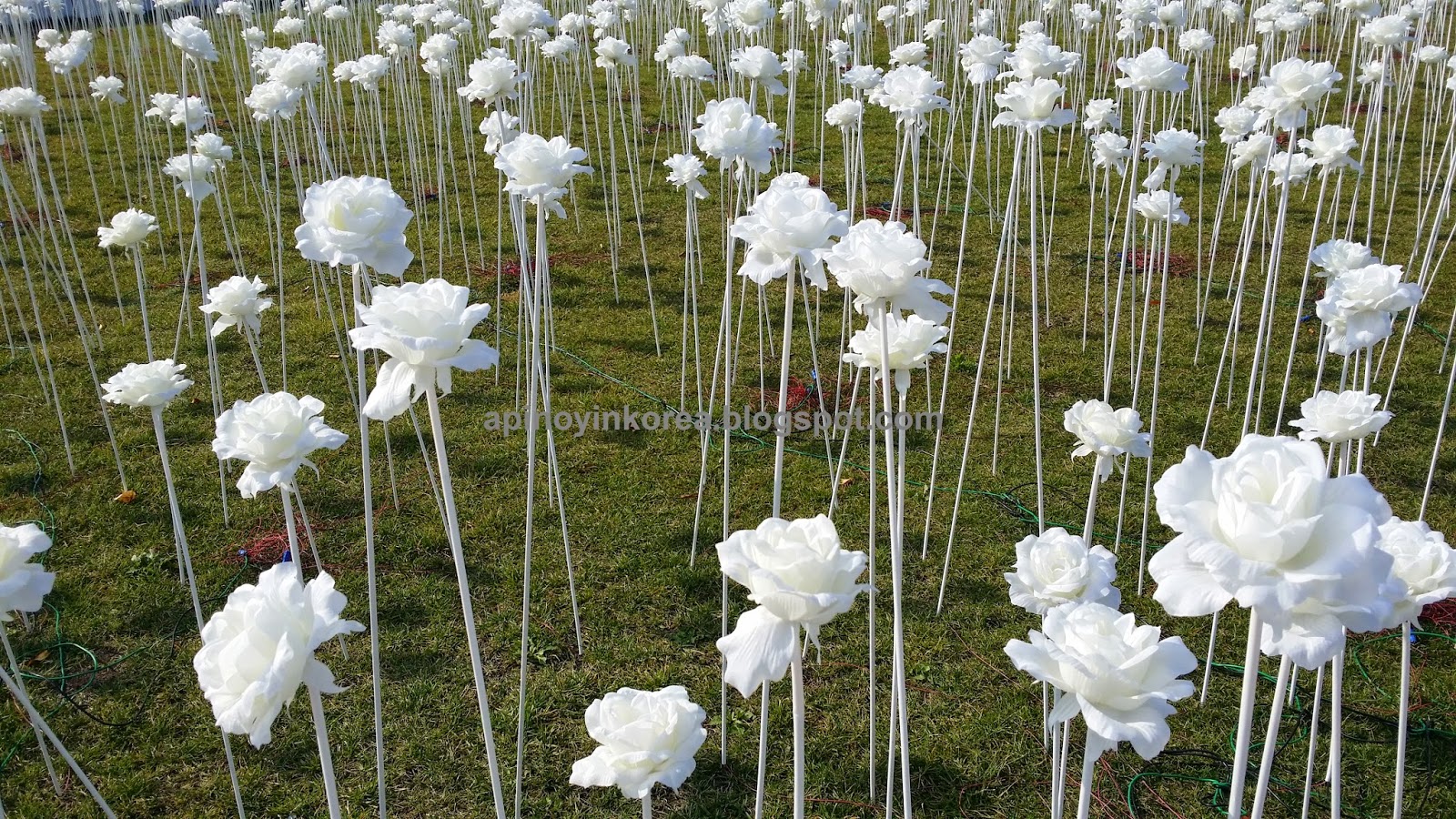 You only need a light switch. Ha-ha-ha! 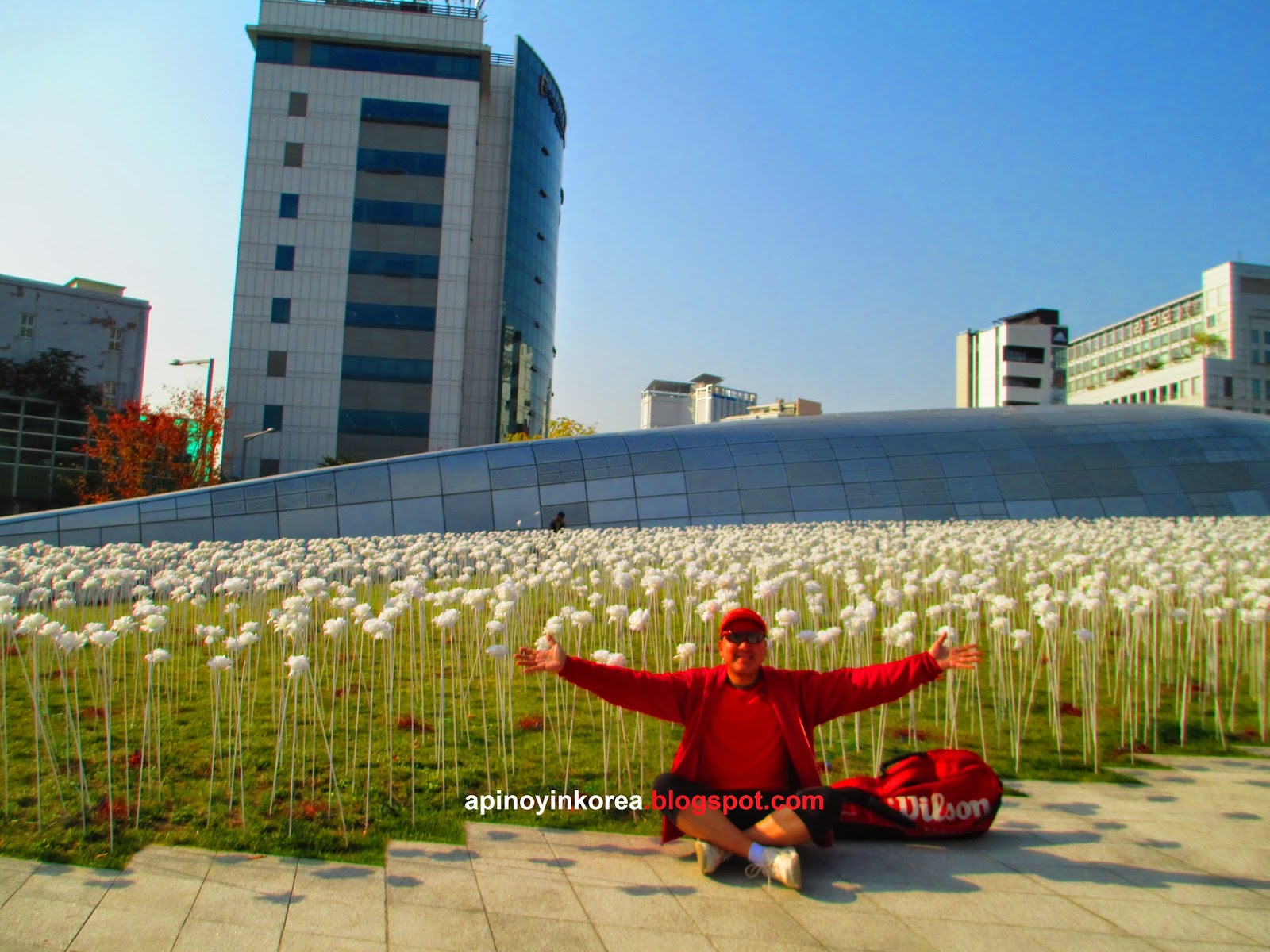 P.S. According to the DPP people, they're keeping the light installation until the end of 2014. They haven't decided yet if they'll extend it further.
Posted by Alphonse at 12:03