Winning A Photo Prize For The Banpo Fountain Bridge 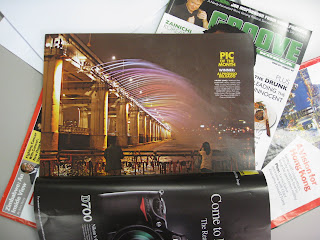 Well, well, well. Another stroll, another photo, another win. 😍

Because the subject did not disappoint.😀

In the late 2008, it was touted that it would be the longest fountain bridge ever once it opened. The Banpo Bridge, a once boring bridge where traffic flows between Banpo-dong, south of the Han River, and Itaewon, my favorite side of the river, 'reinvented' itself when 9,380 nozzles were installed on both of its sides.
These nozzles, complimented with 200 colored lights, would pump 190 tons of water per minute from the Han River and spray them on the sides of the bridge from about 20meters up. The fountains on each side are distributed over 570 meters.😱 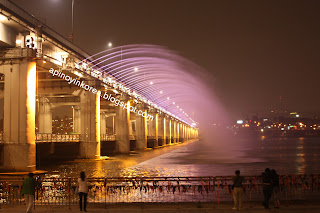 At night fall, the fountain shows off a spectacular display of water spouts colored with a spectrum of bright lights as they dance to the rhythms of Korean, and weirdly, Chinese, music blasting off from loudspeakers set up at the Banpo Park.

The whole ‘reinvention’ was completed on September 2008. And once the 1,140-meter fountains on both sides of the bridge successfully performed as planned, it was named by the Guinness Book of World Records as the longest bridge fountain in the world.😊

So, on one summer night in June, together with my friend Jeong-suk, I crossed the Banpo Bridge to see the fountains for myself.
Standing on the river bank, Banpo-side, armed with my cameras, we joined the locals sitting on the park, and allowed ourselves, too, to be mesmerized by the dancing fountains while they change colors to the beat of the music.

I moved around the park, getting shots of the fountains from different angles. And after 30 minutes of spectacle and hundreds of camera clicks later, we decided to call it a (summer) night, even as the fountains were still tirelessly boasting of their world record in front of a captive audience.

And as I said, the fountains did not disappoint. Their photos, that is.
Reviewing the photos after, I was so delighted to have captured the colors and the asymmetry of the water fountains that I decided to submit one of the photos to Groove Magazine, a local expat magazine published in Seoul. And voila! A month later, I saw the photo featured as the ‘Pic of the Month’ for August 2009.

Before we crossed the bridge, Jeong-suk and I grabbed a bite at my favorite fastfood in Itaewon, Pita Time. His treat! 😃

Now, it’s my turn. Since my prize is a dinner coupon worth W50,000, I can treat Jeong-suk to a more expensive meal this time.😝 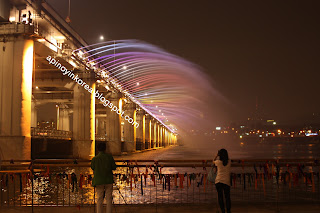 (The photograph of the Banpo Fountain Bridge
that won me a prize💜)
Posted by Alphonse at 17:39