A Pinoy At The Movies: Les Miserables

I thought I would miss this movie before I left Seoul for my Christmas vacation.

On December 18, the day before the Korean presidential elections, I claimed my free movie ticket at CGV Yongsan to watch Les Miserables the next day. Since the 9AM first screening was too early for me, I asked the CGV ticket girl to save me a seat at the 10:50AM screening.

The next day, I thought I was late. I got into the cinema at 11AM and found a guy sitting on M14, my seat.   Thinking that he must have switched from another seat, I whispered to him that he was sitting on mine. We couldn’t understand each other, so I went out and asked for help from an attendant at the lobby. She examined my ticket and told me my ticket was for today all right, but at….10:50….PM! Waaaah!  Not only did I go into the wrong screening, I almost kicked out a moviegoer  from his own seat!  Ha-ha-ha! Soh-reee! 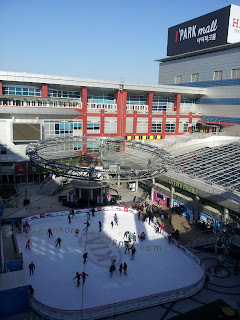 Back to the attendant. I told her my flight out of Korea was at 9:30PM and I definitely wouldn’t be able to stay any longer even if they let me sing along with Hugh Jackman at the 10:50PM screening. But with the help of her manager, they changed my ticket to the 12PM screening. Wheew! That  was close. I didn’t see that mistake coming!  No wonder the audience was already so quiet and still when I got into that screening. They were already in the middle of the movie! Ha-ha-ha!  (Lesson: make sure nothing is lost in translation when buying a movie ticket in Korea!). 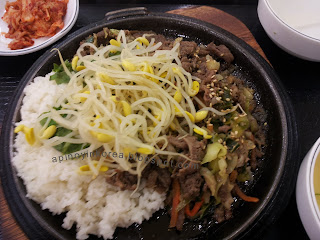 After disaster was averted,  I went around I-Park Mall to kill time before I grabbed a bulgogi lunch and a drink before the 12PM movie.

Now, on to the movie. 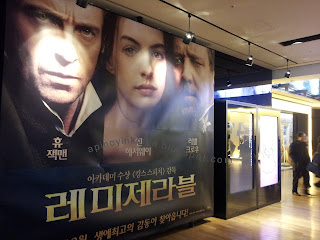 Even on the first five minutes of the film, I immediately noticed that Russel Crowe was a miscast. His singing sounded nasal and funny, ‘ Maximus Decimus Meridius’ (his character in Gladiator) was written all over his forehead, and it seemed he had trouble squeezing into Javert’s uniform. A few more baguettes with French cheese and wine, and he would have had Napoleon Bonaparte’s waistline. I could easily name a couple of Hollywood actors who could have played (and sung) Javert. And with a French twang to boot!

And even without the songs and the gorgeous performances of Hugh Jackman, Anne Hathaway and Eddie Redmayne, Victor Hugo’s Les Miserables,  was a novel with stories that were easy to like and relate to:

And let’s include the notorious couple who runs an inn, which could have been easily featured at Gordon Ramsay’s TV show,  Hotel Hell, and  Fantine’s workplace full of backstabbing colleagues (I actually know a few! Ha-ha-ha!) and a supervisor who could have been found guilty of sexual harassment at any labor court.

I was thinking, Les Miserables, without the singing and songs, is the 19th century version of ‘The Fugitive’ (Harrison Ford and Tommy Lee Jones) and ‘Catch Me If You Can’ (Leonardo DiCaprio and Tom Hanks).

Though Monsieur Hugo wrote his novel in 1862, these stories are very 21st century still. No wonder the audience around me that day at the cinema were sniffling and wiping their eyes with tissue. They identified themselves with those characters.  And me?  My tummy was full with my bulgogi lunch from the E-Mart food court and I was sipping green tea latte from Angel-In-Us during the movie. I was fine. Ha-ha-ha!

Even before the closing credits rolled up the screen,  I thought Hugh Jackman, Anne Hathaway and Eddie Redmayne deserved Oscar nominations.

I initially didn’t recognize Huge Jackman on the first scene. He was so emaciated and transformed that I didn’t know Wolverine was down there weight-training with the rest of the convicts using those huge ropes, while singing ‘Look Down’ as the lyrics synchronized with the cadence of a very wet workout. I was especially impressed with the way he carried the movie all throughout; this time without the help of any X-Men or his mutant powers. The only things he needed were his voice and his ability to convince us that, while Jean Valjean was a sentenced convict, one can change for better life:  first, by stealing expensive candelabras. Ha-ha-ha! Of  course, with the intention of returning them later.

Seriously, his singing was just superb with his voice firm and notes spot-on. And if there was dancing on his scenes,  Jean Valjean would have another career other than being mayor and the Adoptive Father of the Year.

Anne Hathaway, who admitted she didn’t have the voice for a real on-stage musicale, made us believe she was indeed an abused single-mom and factory worker, who could still sing a few bars while on her deathbed and sporting really short hair. This was far from her other roles as a princess and a superhero in a tight leather costume. I bet she will win a best supporting Oscar for this role.  Catherine Zeta-Jones won the best support actress Oscar after doing splits in prison while singing in another musicale, Chicago. Hathaway had her teeth pulled, her hair sold and was abandoned by her boyfriend after she got pregnant.  What do you think? 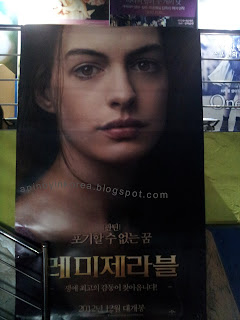 While the rest of those youngsters at the barricades were equally good, Eddie Redmayne’s peformance, as Marius, could not be ignored. Although I am not sure whether he was a good shooter as there was no body count on how many French soldiers he was able to kill while firing from a pile of tables, sofas and chairs (isn’t French furniture expensive?), his portrayal of an ‘heredero’ (heir), who’s trying to keep a low profile as a revolutionary, stood out.

Redmayne’s own moment came when he sang  ‘Empty Chairs and Empty Tables’ on an abandoned tavern, complete with real tears flowing down his cheeks. That, to me, was a performance difficult to match. But in some bars in Seoul, once in a while, you’d encounter some drunk men singing.  Although the water flowing down won’t be tears from the eyes. Ha-ha-ha!

The other actors like Amanda Seyfried (the adult Cossette, a blonde) and Samantha Banks (the adult Eponine, a brunette) were good as well, but they were just pretty icing at the barricades.  Banks was too pretty to be Eponine (she played this role at West End), which left me wondering, how could Marius ignore her pretty face when he was with her all the time?  Maybe he preferred blondes, or maybe he just wanted to marry a mayor’s daughter in preparation for a bright, political career. But had he known Seyfried’s dad in Red Riding Hood was a werewolf, he would have changed his mind.

And the other couple, the Thenardiers, was off. Sacha Baron Cohen seemed drab and corny, and Helena Bonham Carter, maybe because of her partner, seemed uninspired. While partnering with Johnny Depp in Sweeney Todd: The Demon Barber of Fleet Street, another musicale, she was in her elements. Unfortunately this time, she’s paired with Baron Cohen, who’s way below Depp’s league. They should have cast another wicked couple.

At the end of two-and-a-half hours, I wasn’t burping anymore from my bulgogi lunch. I was singing at the barricades. Ha-ha-ha! And the audience around me? Well, most of them were busy wiping their tears and blowing their noses for the last time.

Leaving the CGV cinema and rushing home to catch a flight at Incheon International Airport, I was totally impressed with the whole movie. Even if you cast talented unknowns for those big roles, the songs and the lyrics alone would have caused my neighbors to cry.

And as my Cebu Pacific flight that night did not have any in-flight entertainment, watching Les Miserables that same day was, for me, the best in-flight movie ever. 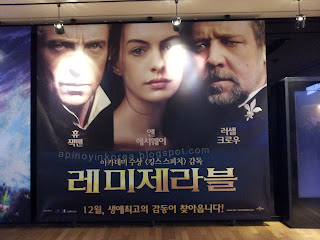