Maybe Joss Whedon, the director of Avengers: Age of Ultron is a fan of Psy's Gangnam Style. Why? Because he included Gangnam in the select locations for his movie. I wonder if the Avengers superheroes are fans, too.

I like Gangnam. If you like to people-watch or enjoy dinner and drinks with friends on a Friday night or weekend, this place has lots of restaurants, bars and cafes. 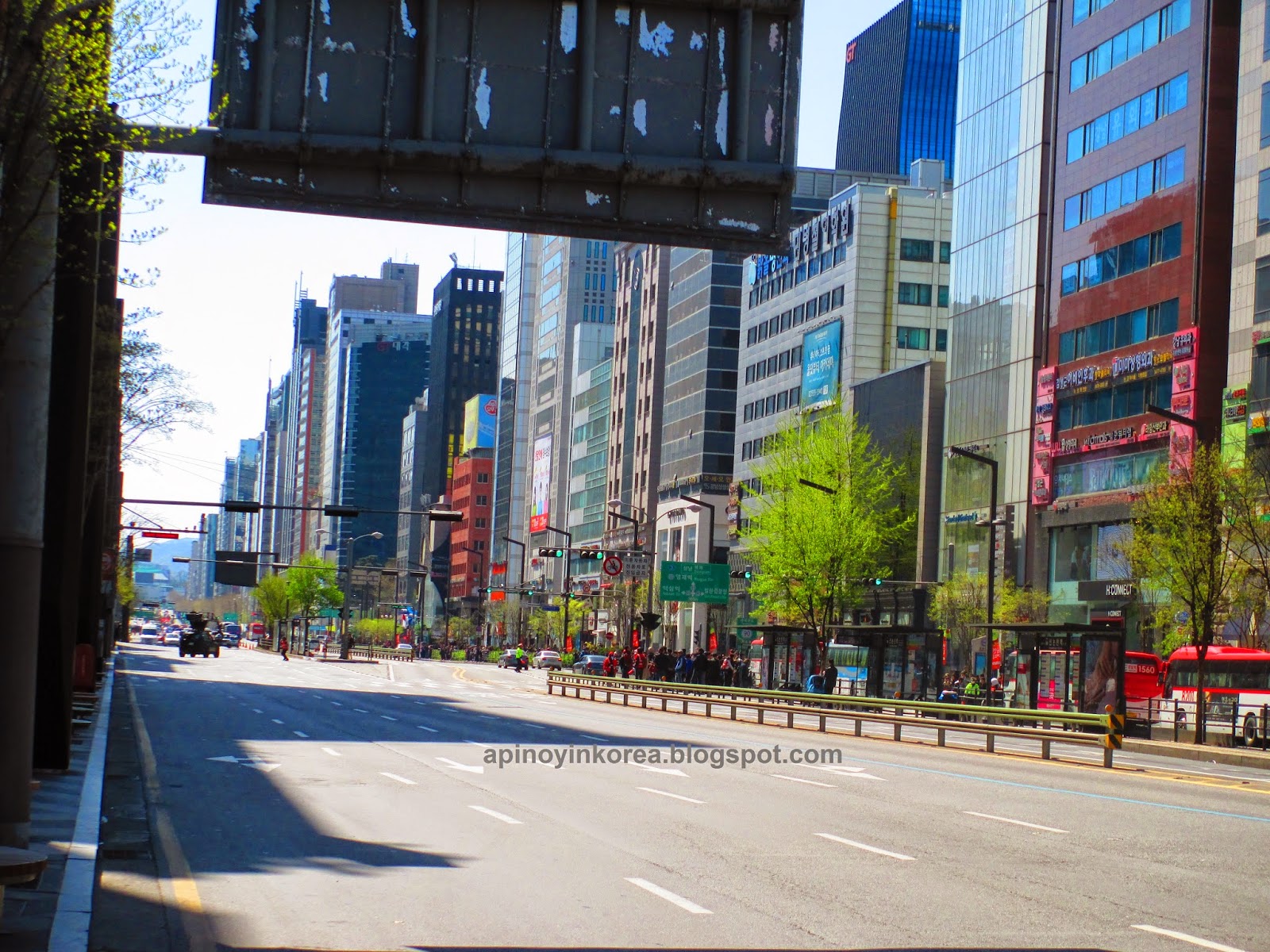 In 2013, I included this place as one of the stops my friend Maria had to see during her five-hour stopover in Seoul.  I made sure she set foot in the place Psy made famous worldwide. In case you don't know yet, at Exit 11 of Gangnam Station, Psy is there, or at least his silhouette, waiting for anyone to pose with him for picture doing that Gangnam Style pose.

But on April 6, 2014, a Sunday, there wasn't any posing with Psy at Exit 11. Everyone's attention was on the location shooting at the main Gangnam Avenue, or Gangnam-daero.  A week before that, when I ventured to take a peek at the location shooting on Mapo Bridge with my friend Andrew, we didn't see anything from the vantage of Yeouido Park. 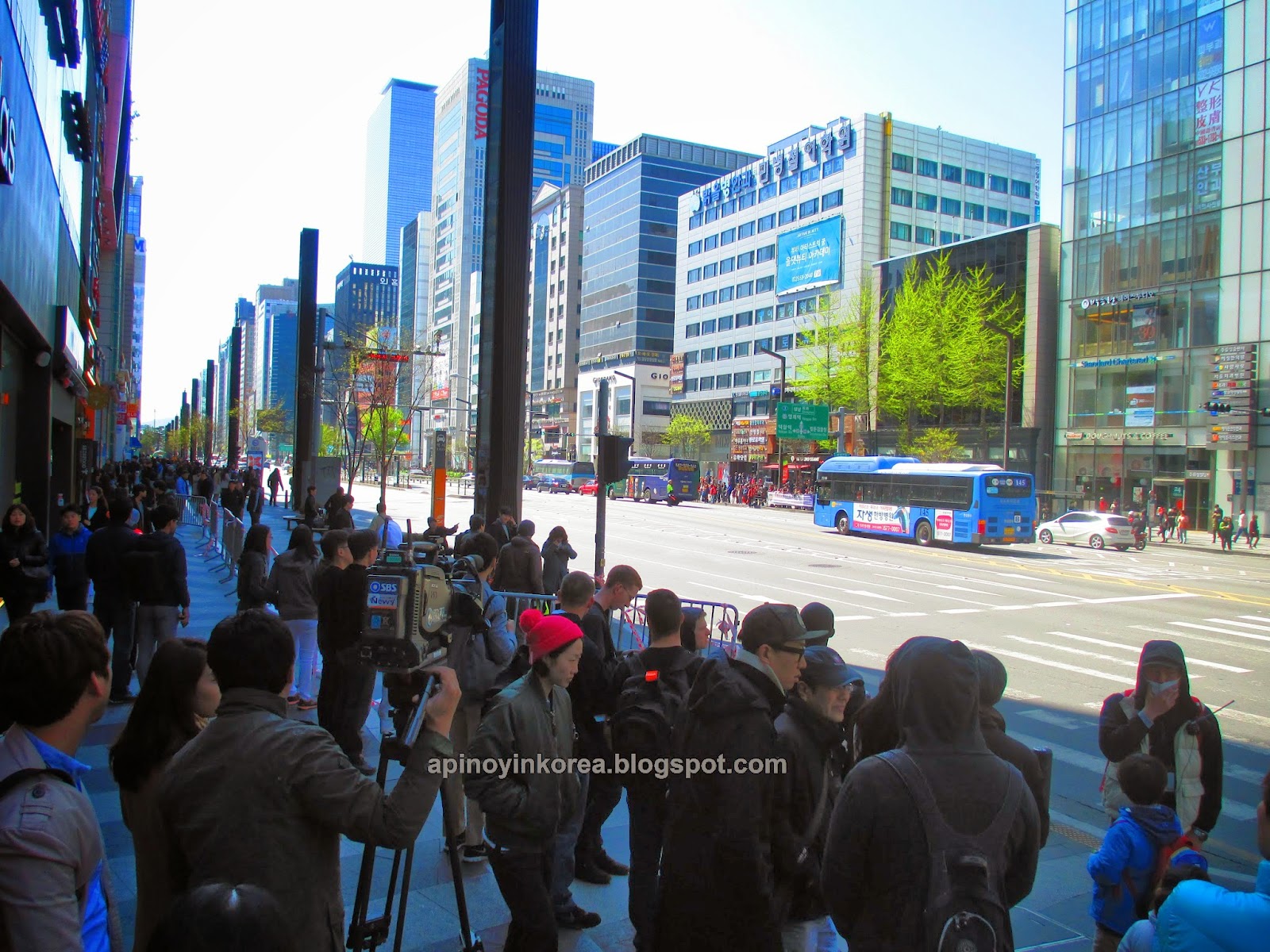 (Crowds waiting for the shoot) 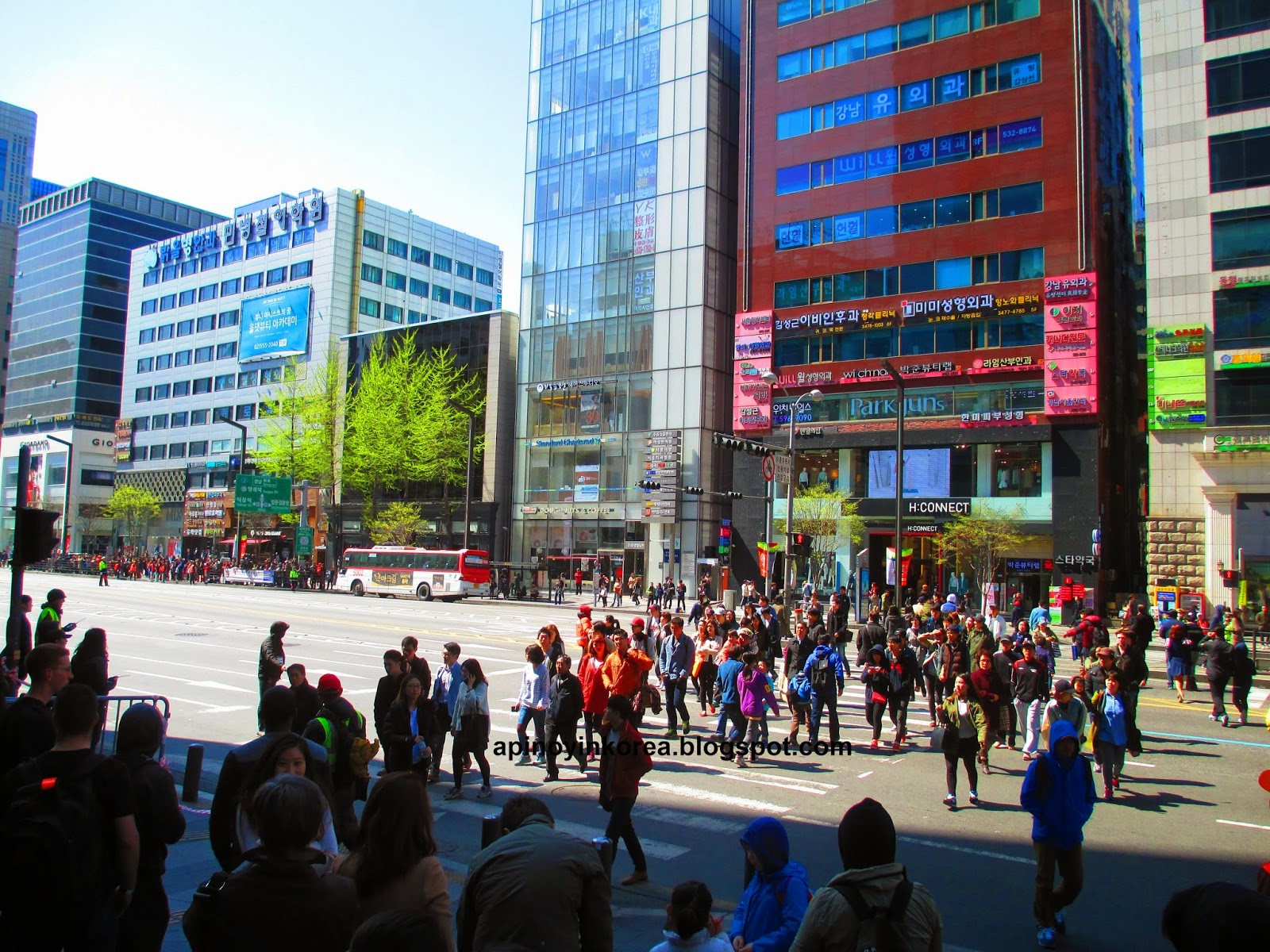 (If the chicken crossed the road, so did this crowd.) 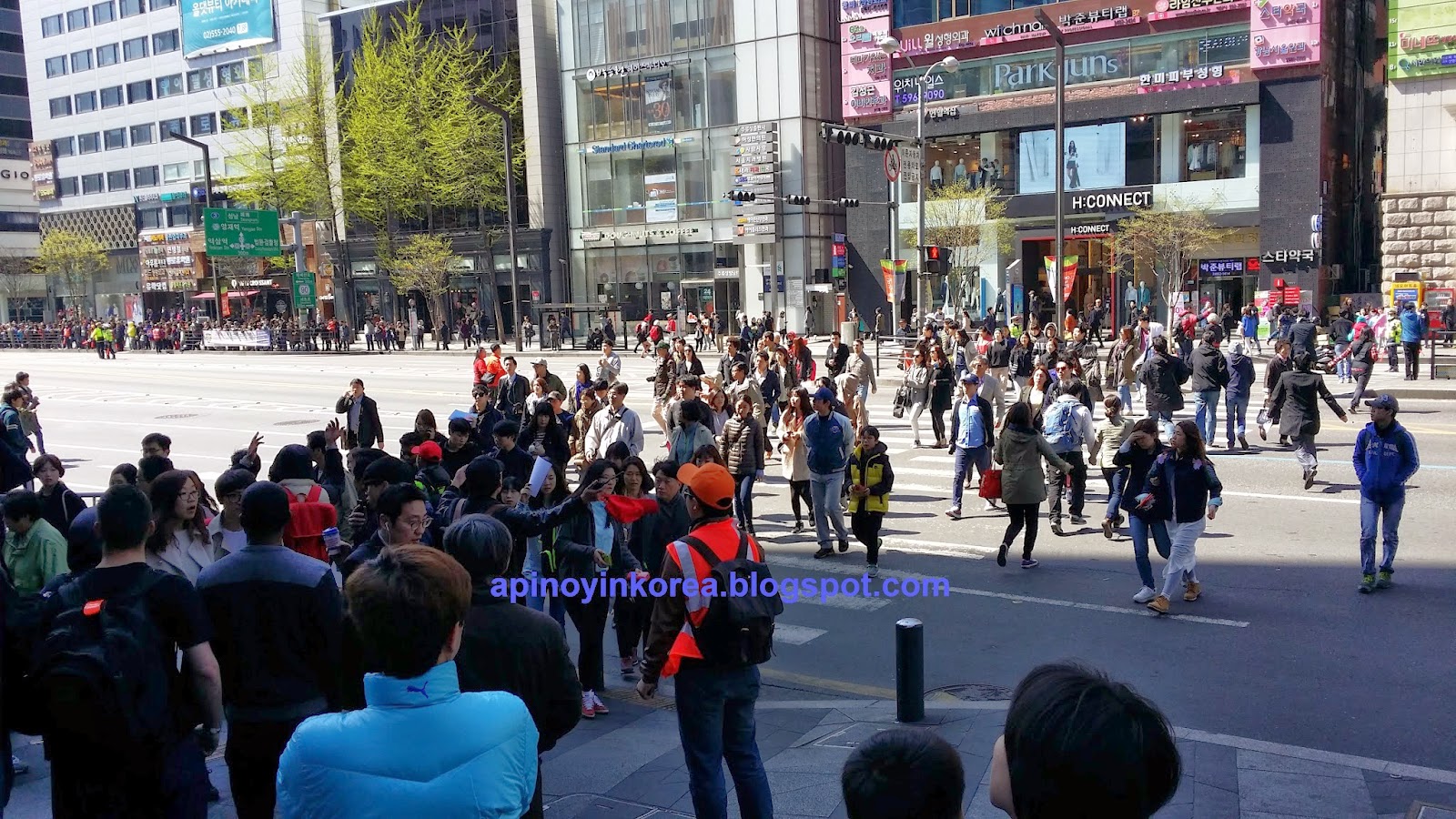 This time, since it was in the middle of Gangnam, I was luckier and closer! I simply took the Blue Bus 241 from Hannam-dong, my neighborhood, crossed the river and got off at the Yeongdong Market bus stop, and just walked towards the Gangnam Station.

As they closed the northbound lane of the main street, it was weird finding the lane empty and without any car, taxi or bus on it. I would have wanted to take a selfie right there in the middle as it wasn't every day the whole place get to be empty, but I wondered whether the Incredible Hulk was just down the road and would slam anyone ruining his shot. Ha-ha-ha! 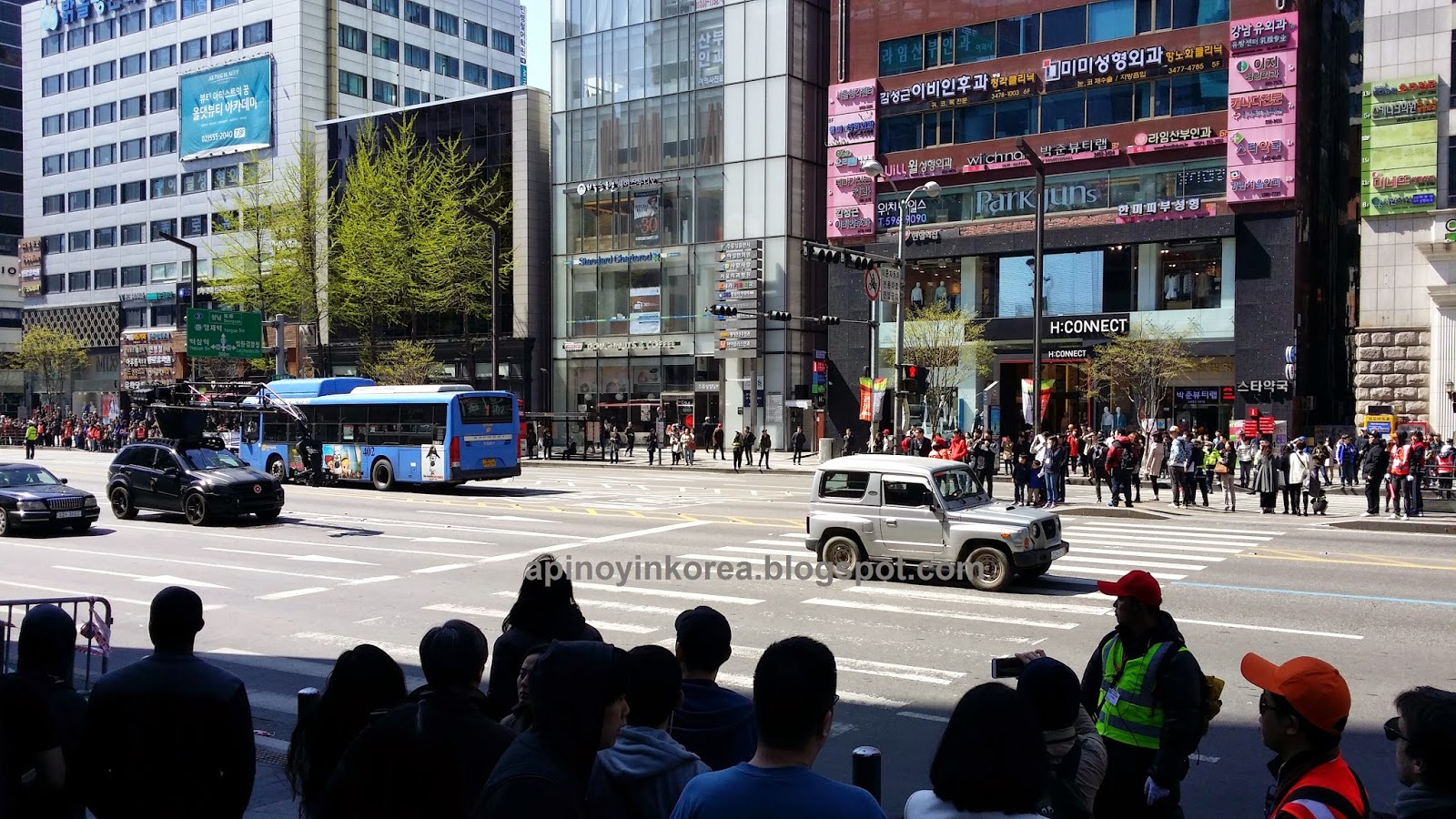 (The silver gray jeep stars in the scene!) 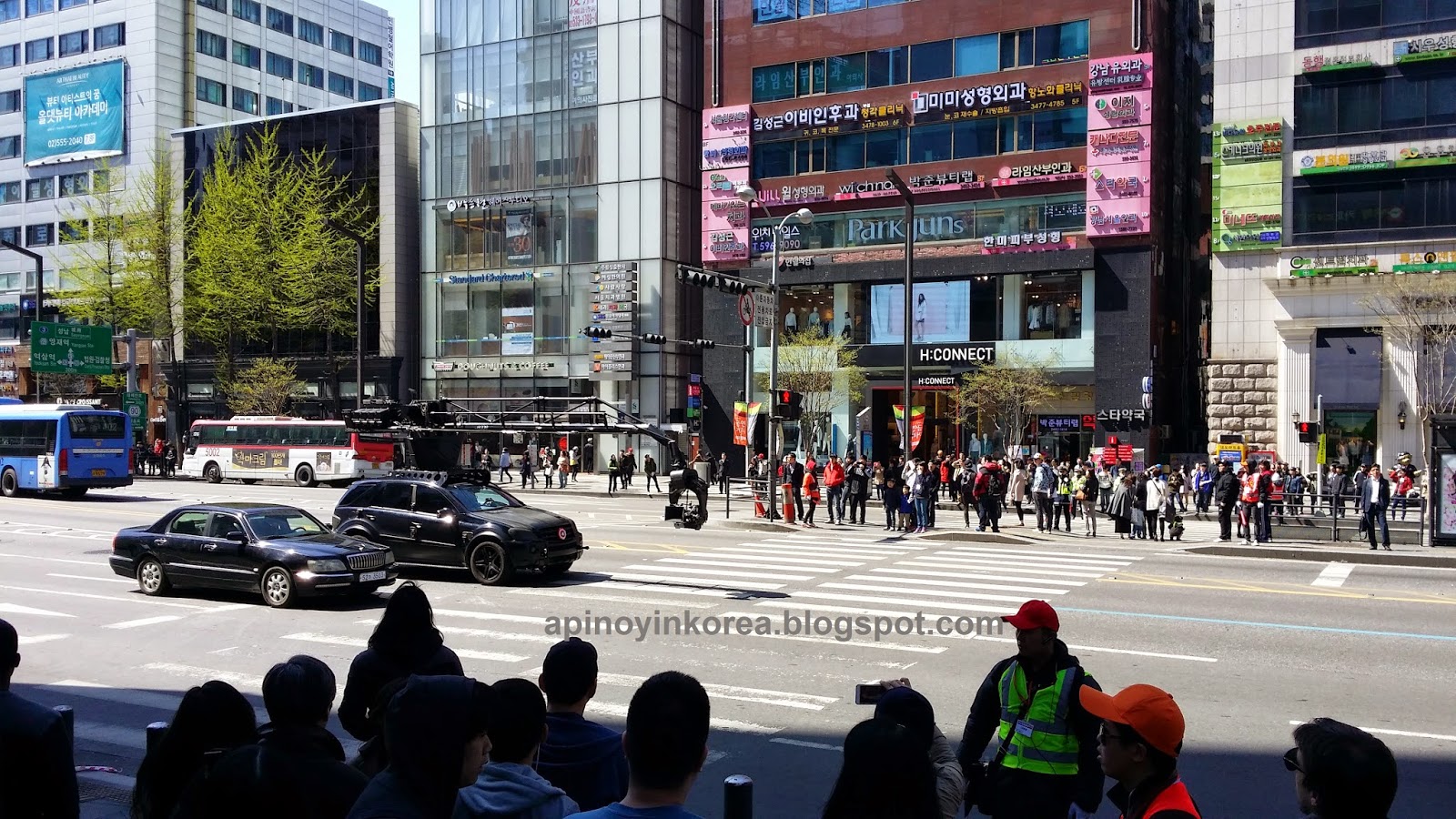 (Followed by a black van with a jib.) 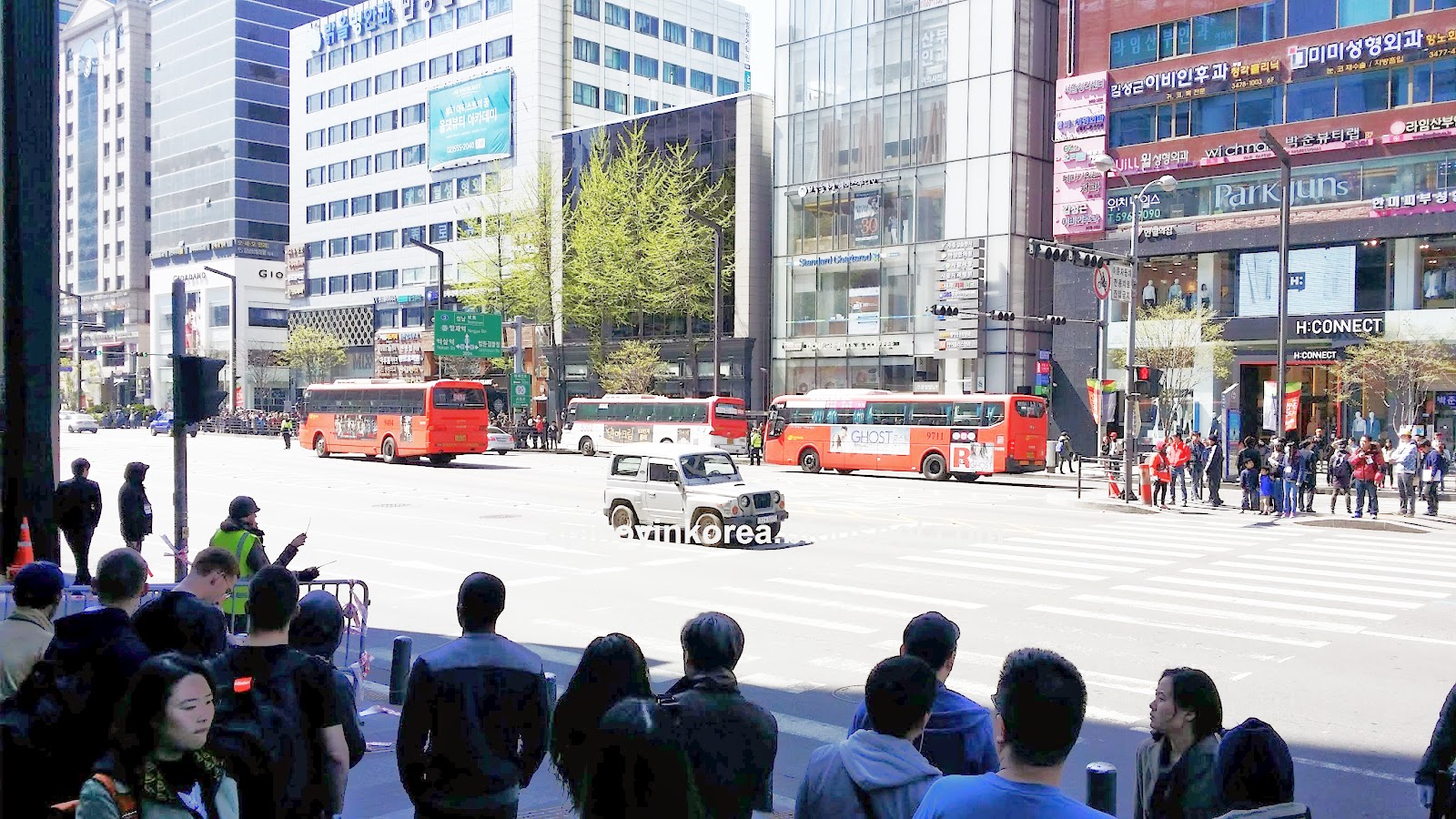 (Looking forward to watching this scene in the movie.)

As expected, people were walking towards the middle of the block and I could see that crowds were already there watching whatever was going down, and even the bus stop in the middle of the road was full, mostly of curious onlookers and people who seemed to work in the area and were just waiting to cross.

When I got to a spot on a sidewalk, right in front where I thought the scene would be shot, I joined the crowd and waited. I chatted with Ja-Yeon, a store manager for a sportswear brand, who was standing there and taking photos as well. He told me that they were already shooting scenes a few times already; so, I stood and waited, too.

And a few minutes later, it started. Silver, white and gray cars, an orange taxi, a few vans started rolling slowly, followed by a silver-gray jeep, which was trailed by a black van with a mounted jib or camera boom. "So, this is Hollywood," I said to myself, "right in the middle of Gangnam". But I wondered, why were the vehicles running slow? This is Seoul, where even the delivery guy from the Chinese restaurant riding the motorbike runs 60 KPH on the sidewalk! Ha-ha-ha! 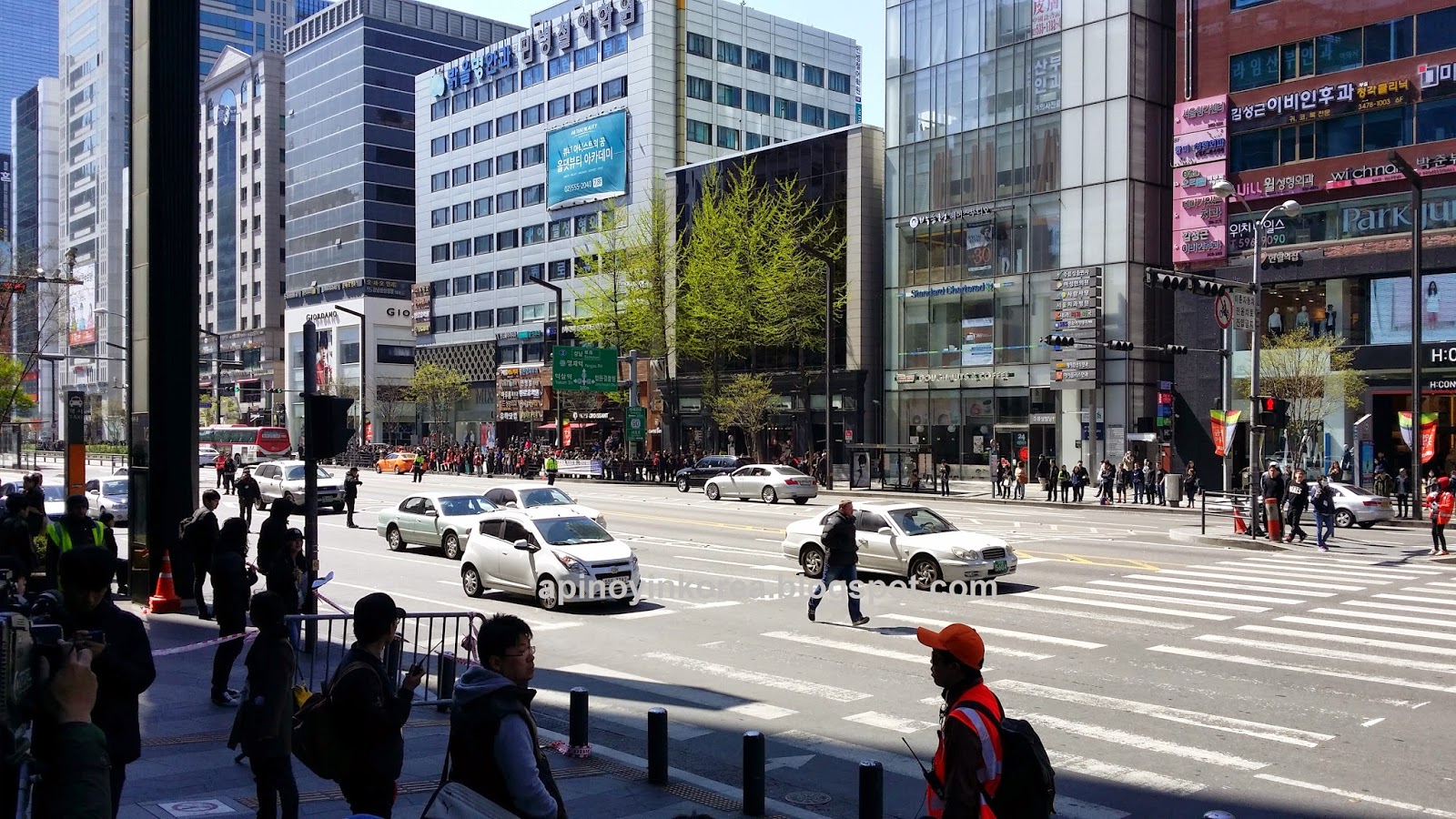 (Cars and drivers waiting for their cue) 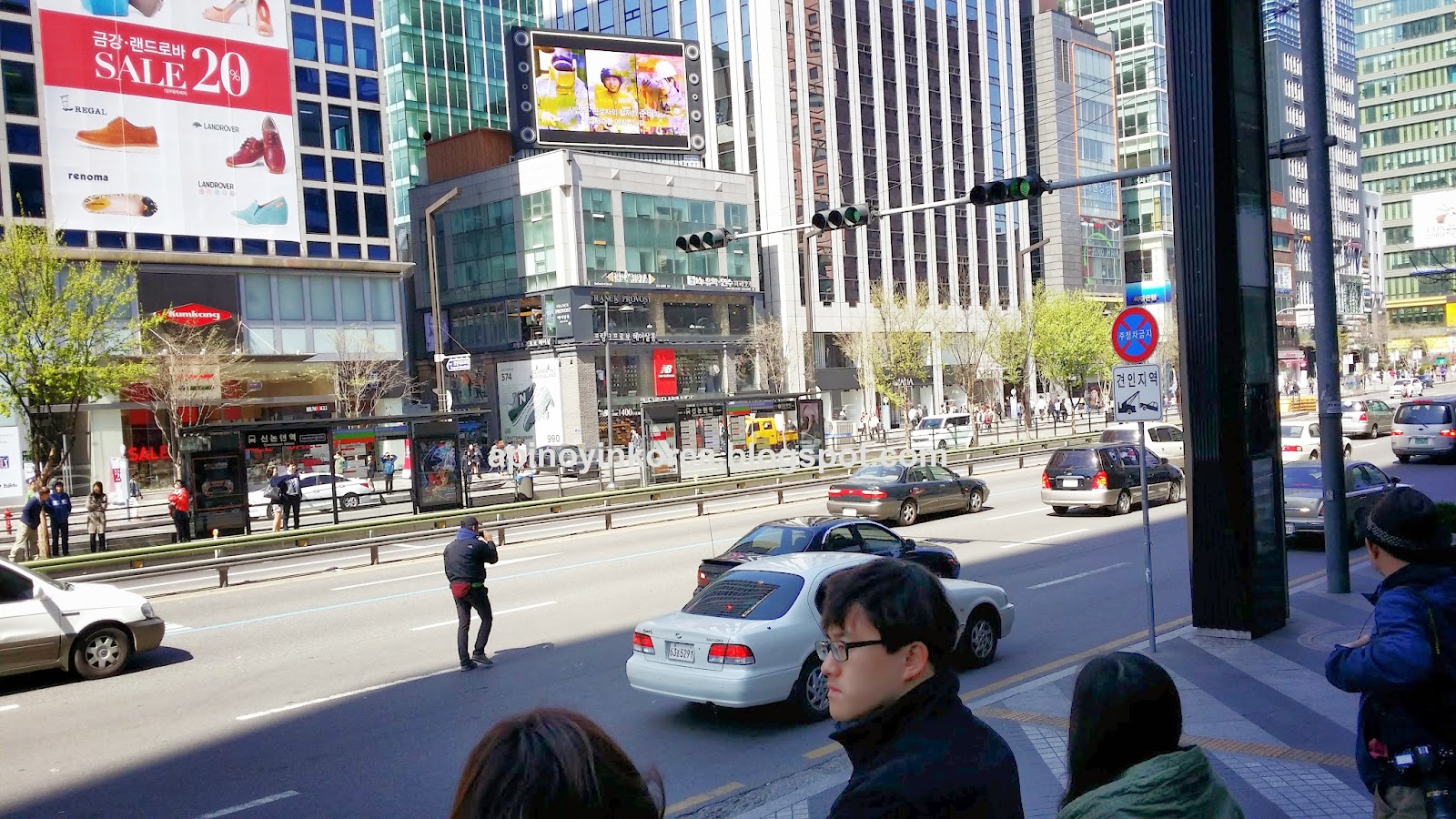 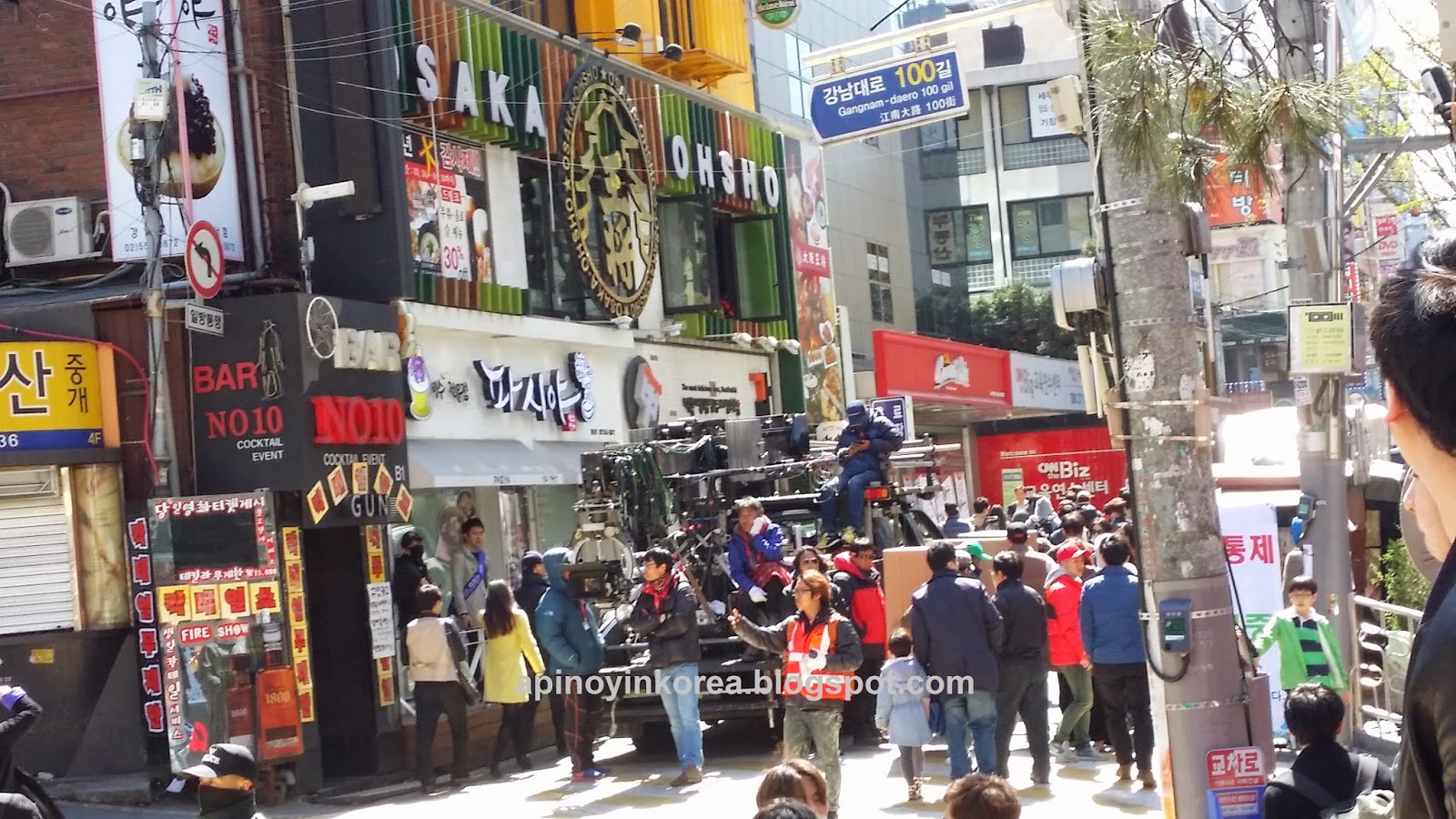 (Cameras and crew on a Gangnam alley)

After watching the shoot at the main street, instead of going back home, I was tempted to walk around the inner alleys. And I was happy I did! There was another scene being shot! Right on the alley where, at its corner, there usually was a dakko-yaki stand that sells my favorite street food at night. And here, there were more fans watching!

This scene was even more interesting than the one with cars on the other side of the block. This one has extras!  The movie production hired a few Korean background actors, who were required to walk up and down the sidewalk during the scene, which made me wonder again. Why on the sidewalk? In these Gangnam alleys, nobody walks on the sidewalk; everyone walks in the middle of the road! Ha-ha-ha! Mr. Whedon should have hired me as assistant director; I was free that day. 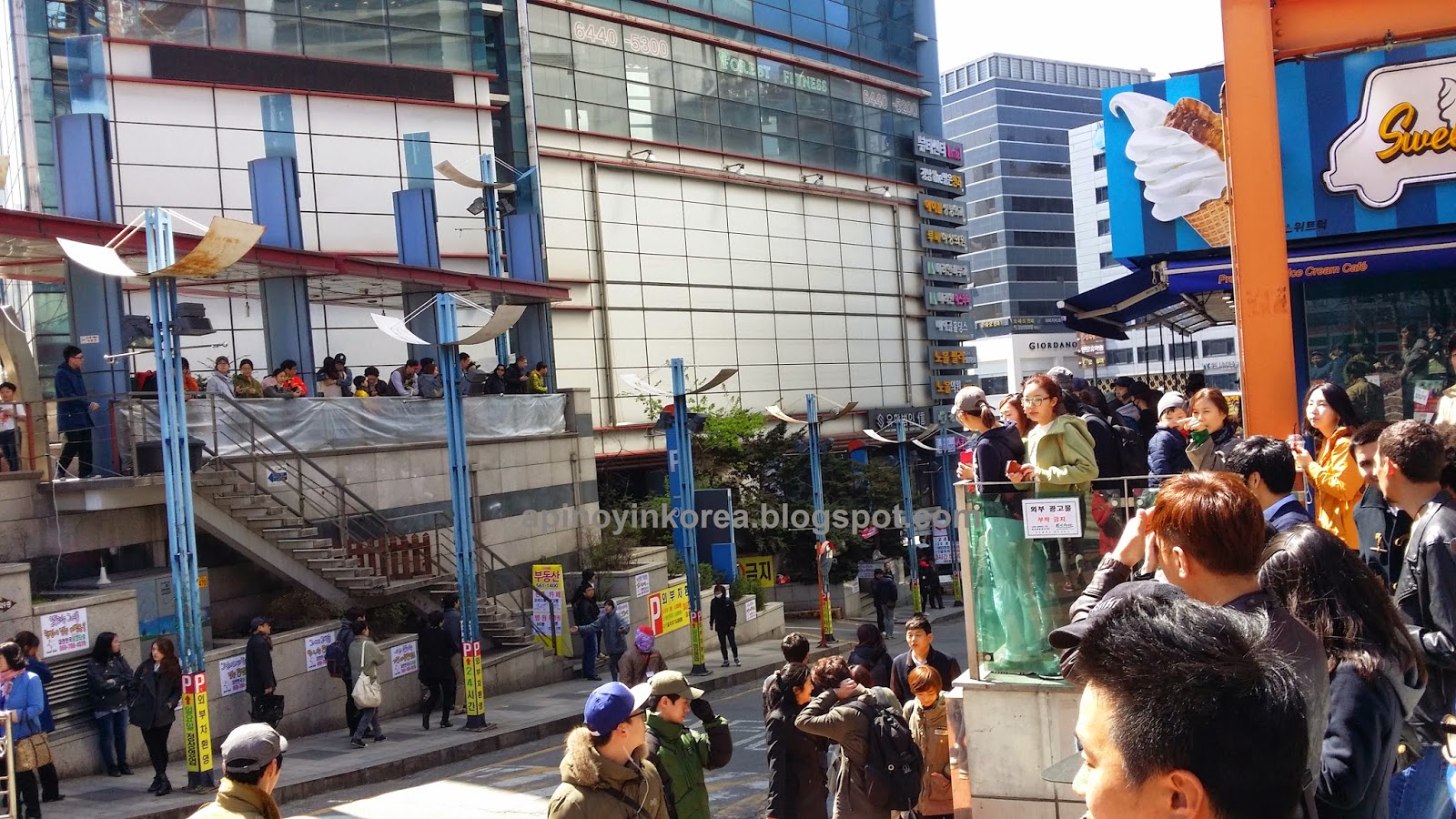 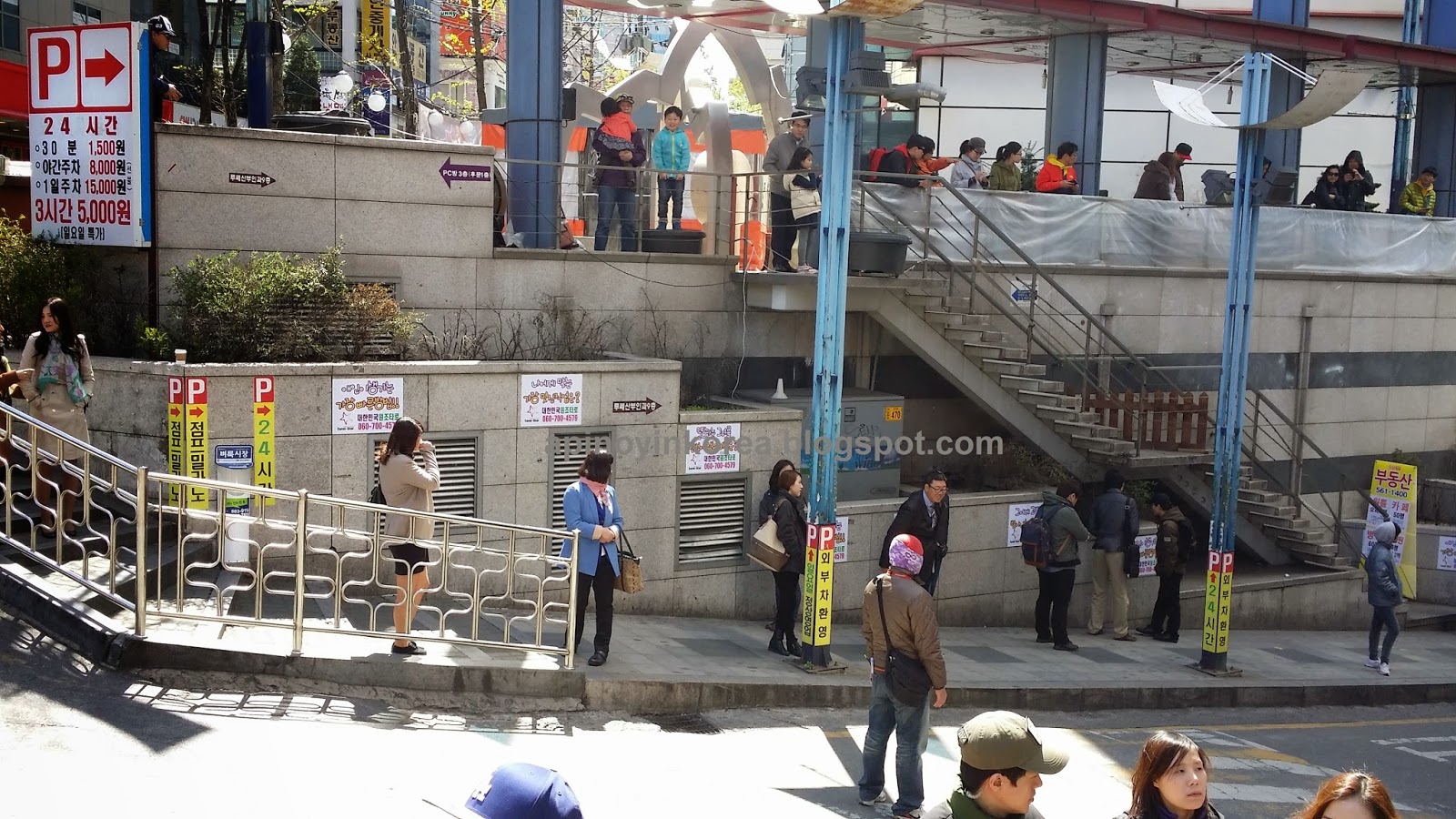 (Background actors on the sidewalk waiting for their cue) 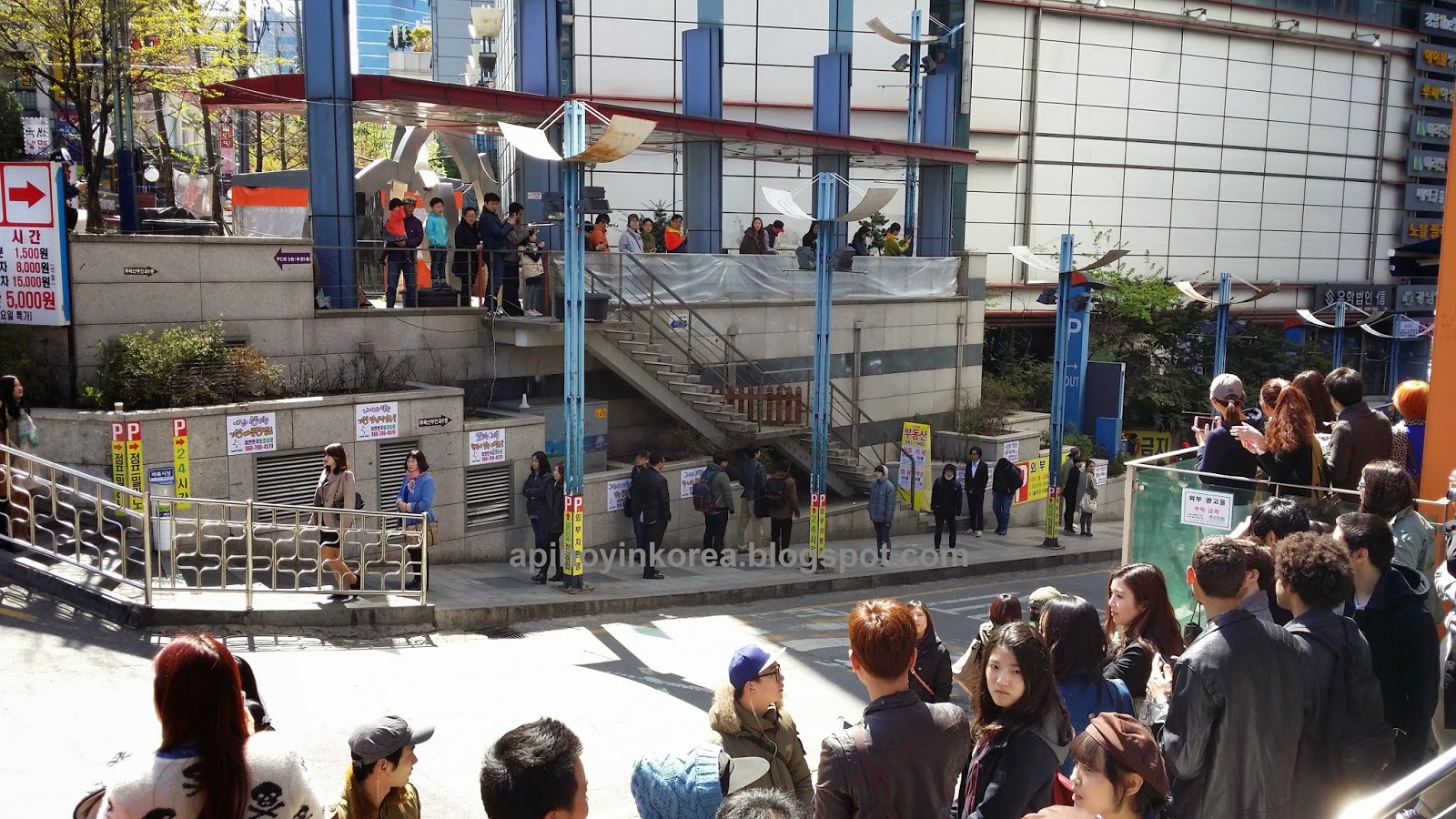 So, there. I was able to finally take a peek into one of the location shootings of Avengers 2 while it was shot in Seoul.

I am looking forward to watching the movie, especially these scenes shot in Gangnam. Would there be any Gangnam Style dancing inserted in the film? Or would that song end up in the soundtrack?

I guess, we'll all just have to wait until next year. Its scheduled release is May 2015. By then, we can all be sure that all the Avengers superheroes will fly into town for the premiere.

Today, November 12, 2018, Stan Lee, the man behind Marvel Comics and the creator of the superheroes on this film that was shot in Gangnam, died.

Rest in peace, Mr. Lee. All your fans and superheroes will miss you. :-(
Posted by Alphonse at 01:29