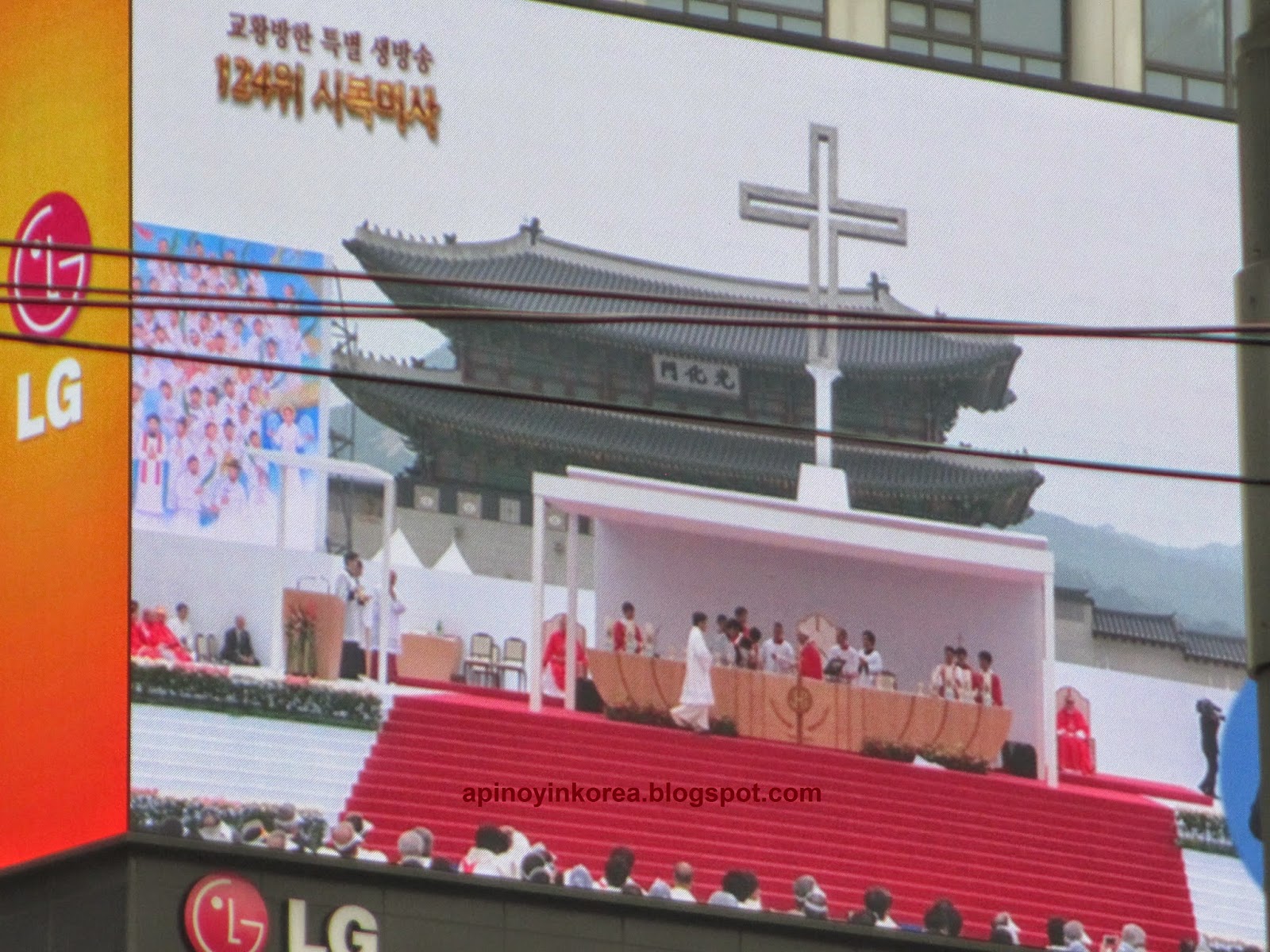 I was right about not asking for a ticket to Pope Francis' beatification of 124 Korean martyrs at Gwanghwamun Square on August 16, 2014.  I heard from friends that those with tickets had to be at the site as early as 5AM; I woke up at 7:30AM that day, and my reconnoitering of the area two nights before the event didn't help. At all! Ha-ha-ha!

But as soon as I awoke that Saturday morning, I checked the live news about the beatification. On TV, thousands were already entering the secured area and people were already posting and tweeting from their seats at the Gwanghwamun Square. Although I felt a little envious, I always reminded myself that I might not have been able to move around to take pictures if I was assigned a seat. 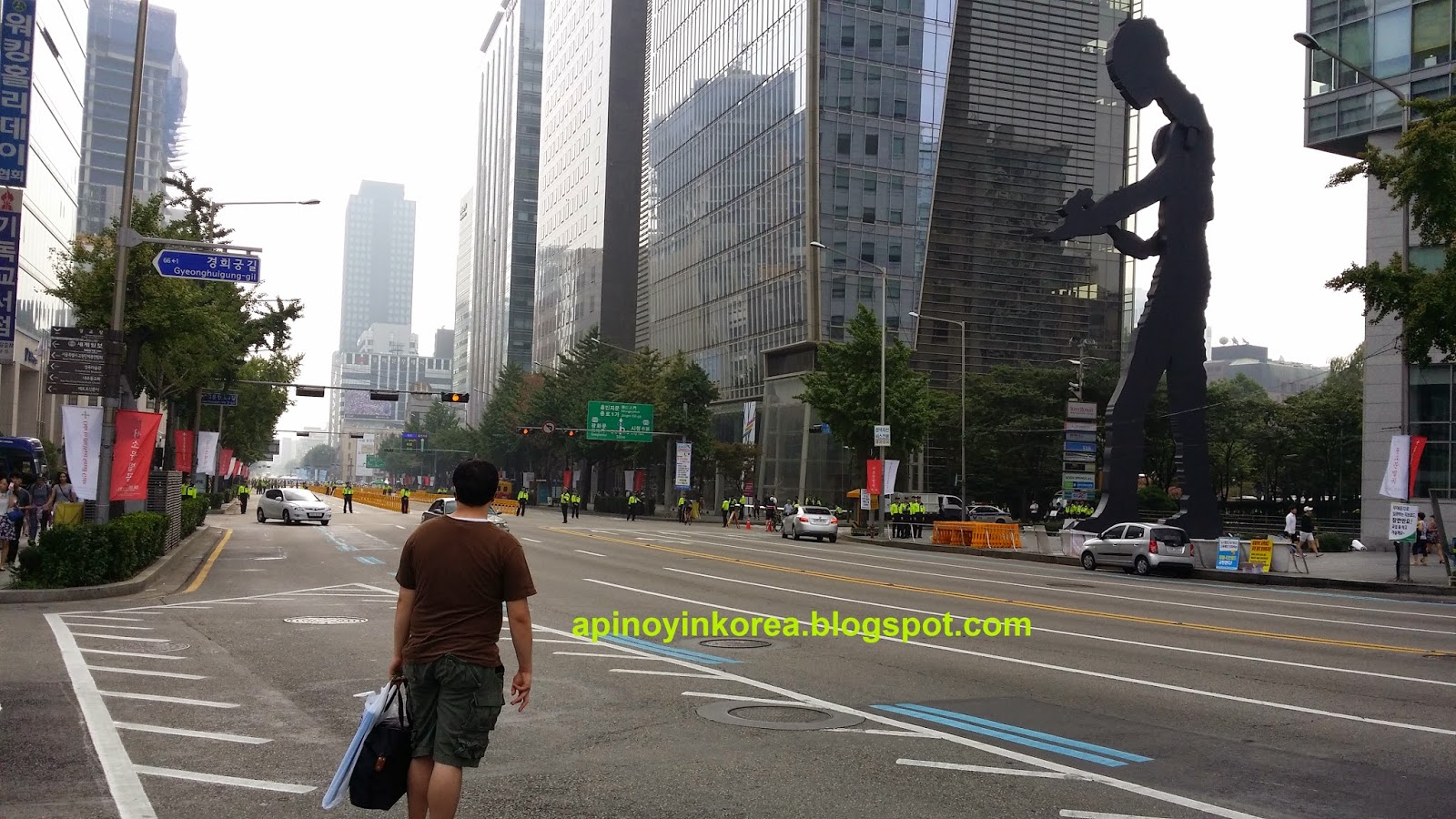 (An empty Saemun-an or
Gwanghwamun street) 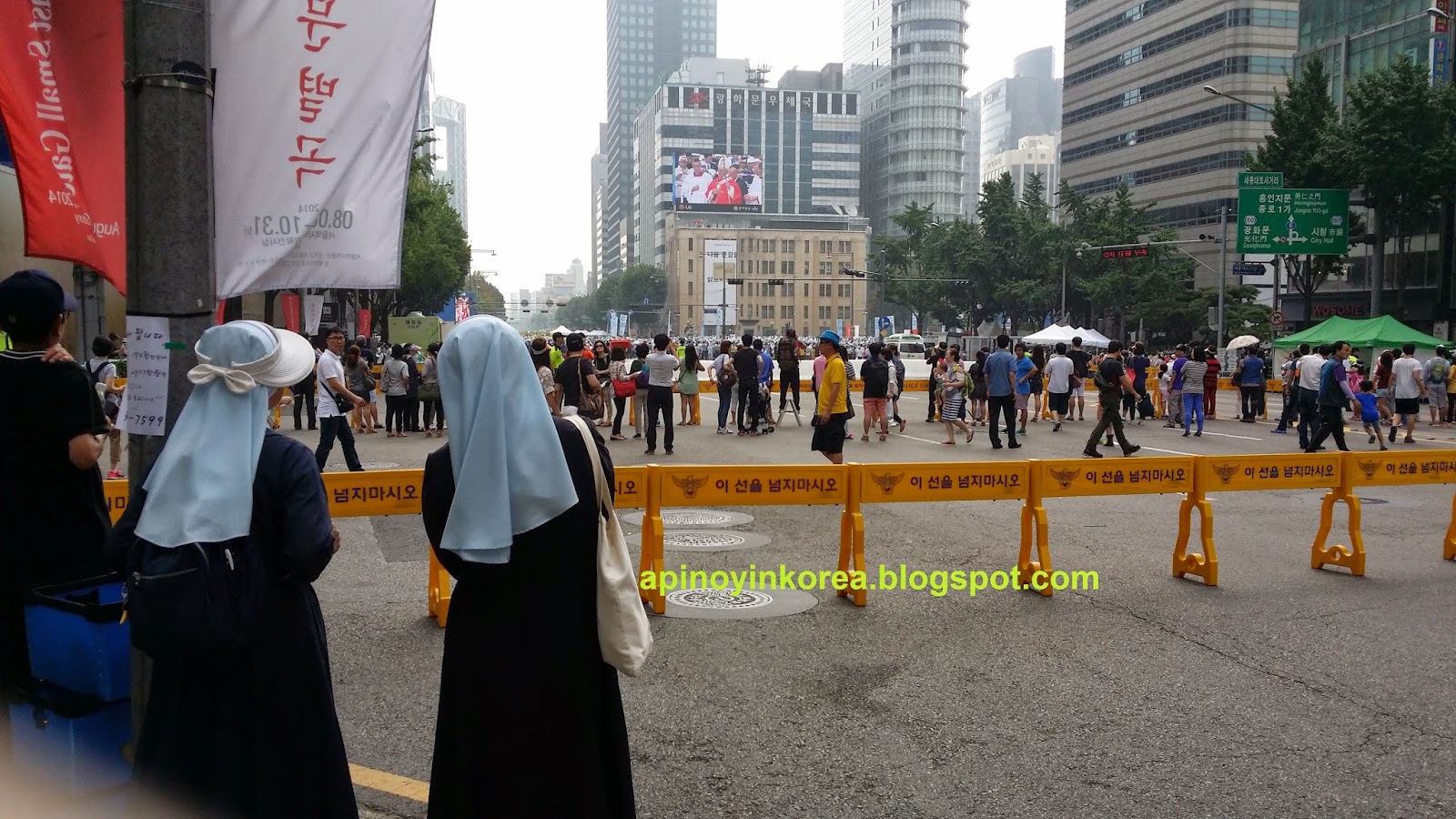 I left my Hannam-dong neighborhood in the Yongsan District about 9AM. By this time, Pope Francis was already at the Seosomun Green Park for a short visit. After that, he was off to the highlight of his visit to South Korea.

I thought of taking the subway, but I realized taking the bus would be more convenient for me since my route to Gwanghwamun Square was via the Seodaemun area. From Hannam-dong, the Blue Bus 421 took me to Sookmyung Women's University bus stop, where I transferred to Blue Bus 752. This is what I like about Seoul: its very efficient transport  system. So, even if the subway stations of Gwanghwamun, City Hall and Gyeongbuk Palace were closed that morning, anyone could still get to the site. From the Seodamun Police Headquarters bus stop, I simply walked for 15 minutes, and...Hallelujah! I was at Gwanghwamun and could already hear the choir singing! 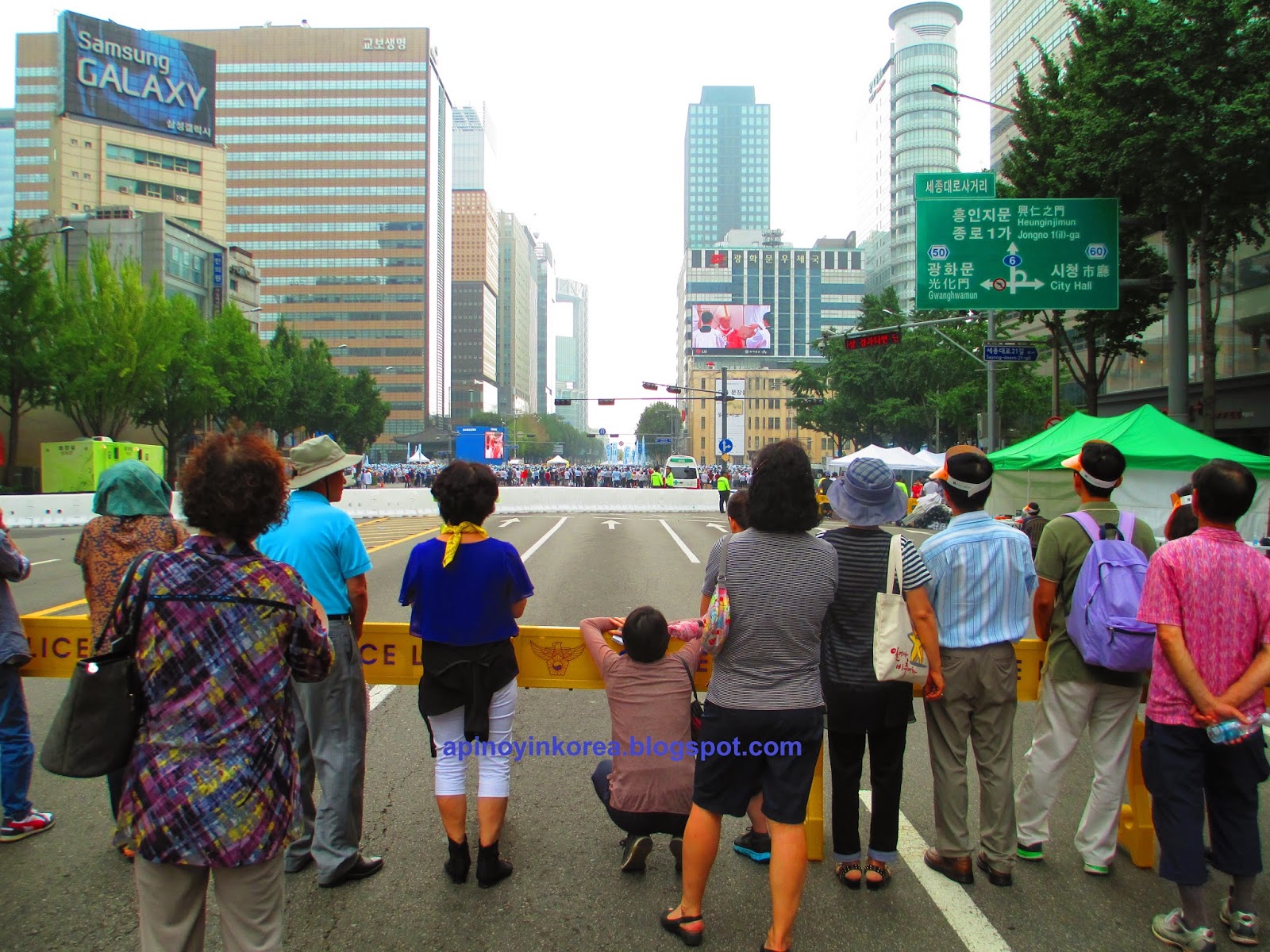 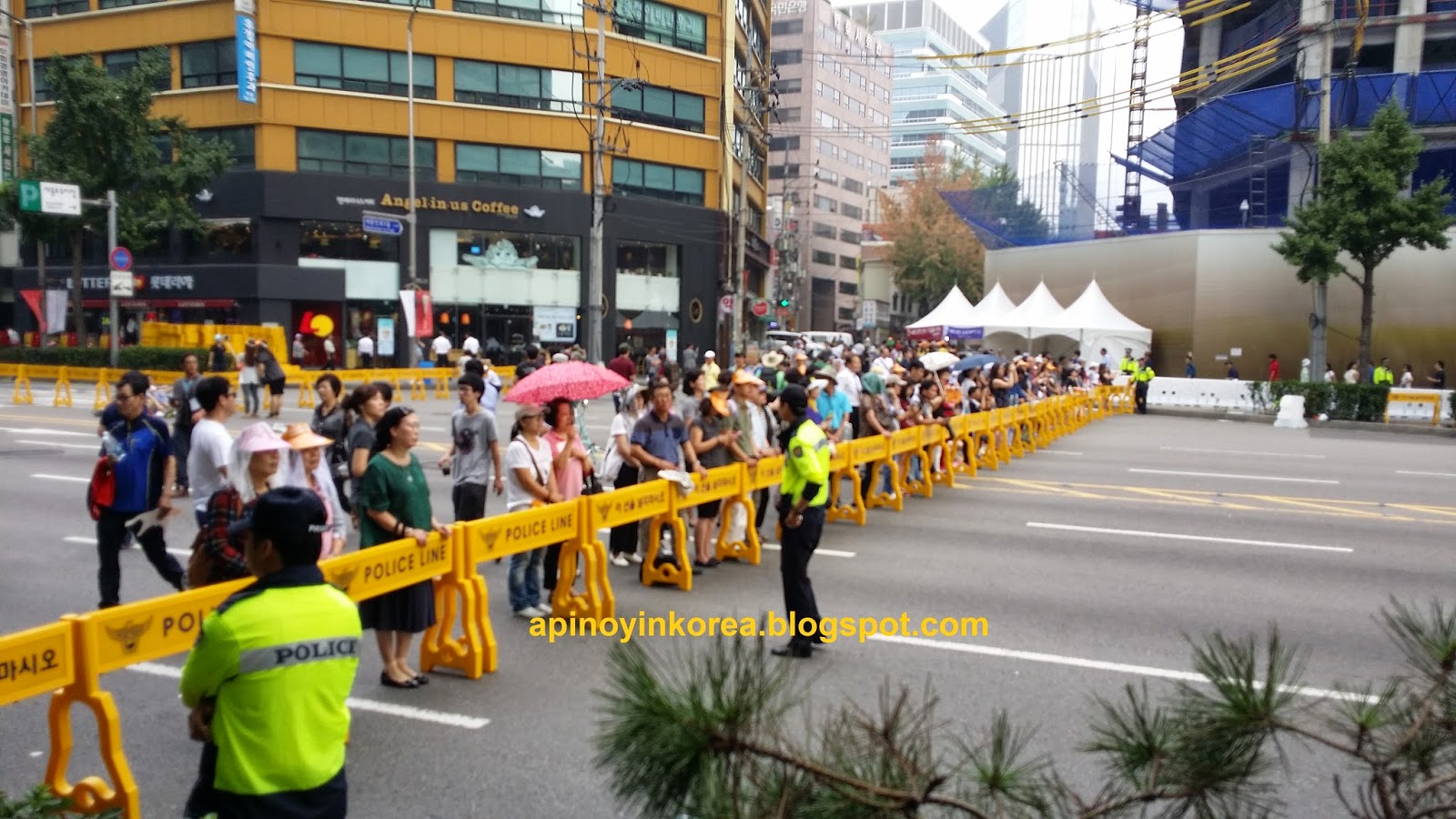 Pope Francis actually roamed around the beatification area to greet the crowd on his pope mobile before the ceremony. Even if I made it earlier, I wasn't sure if I would have been able to take a picture of him,  much less get a good glimpse of his holiness. There would be hundreds of people blocking my line of sight if they were standing or waving hankies, or raising their smartphones to take pictures. 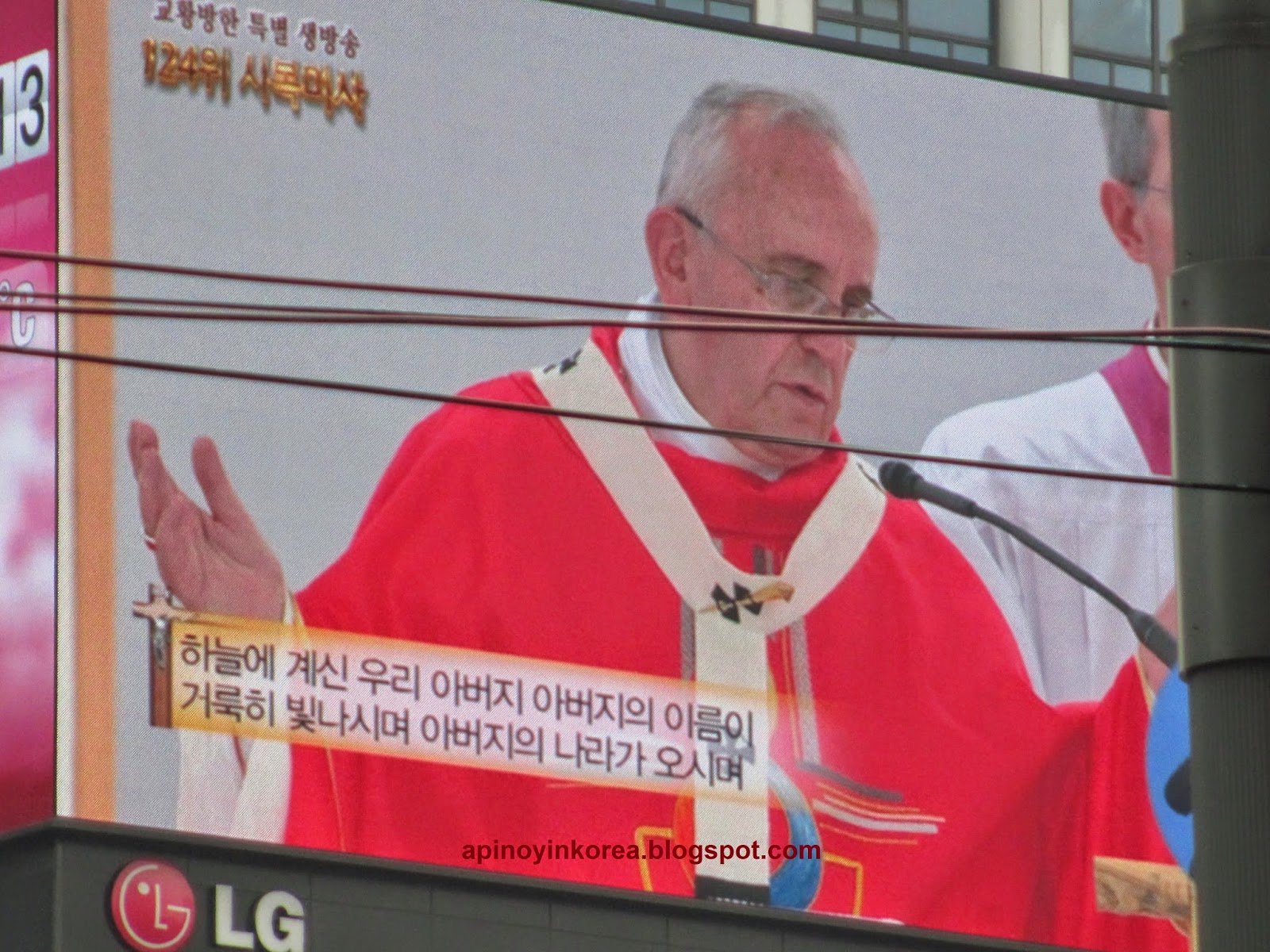 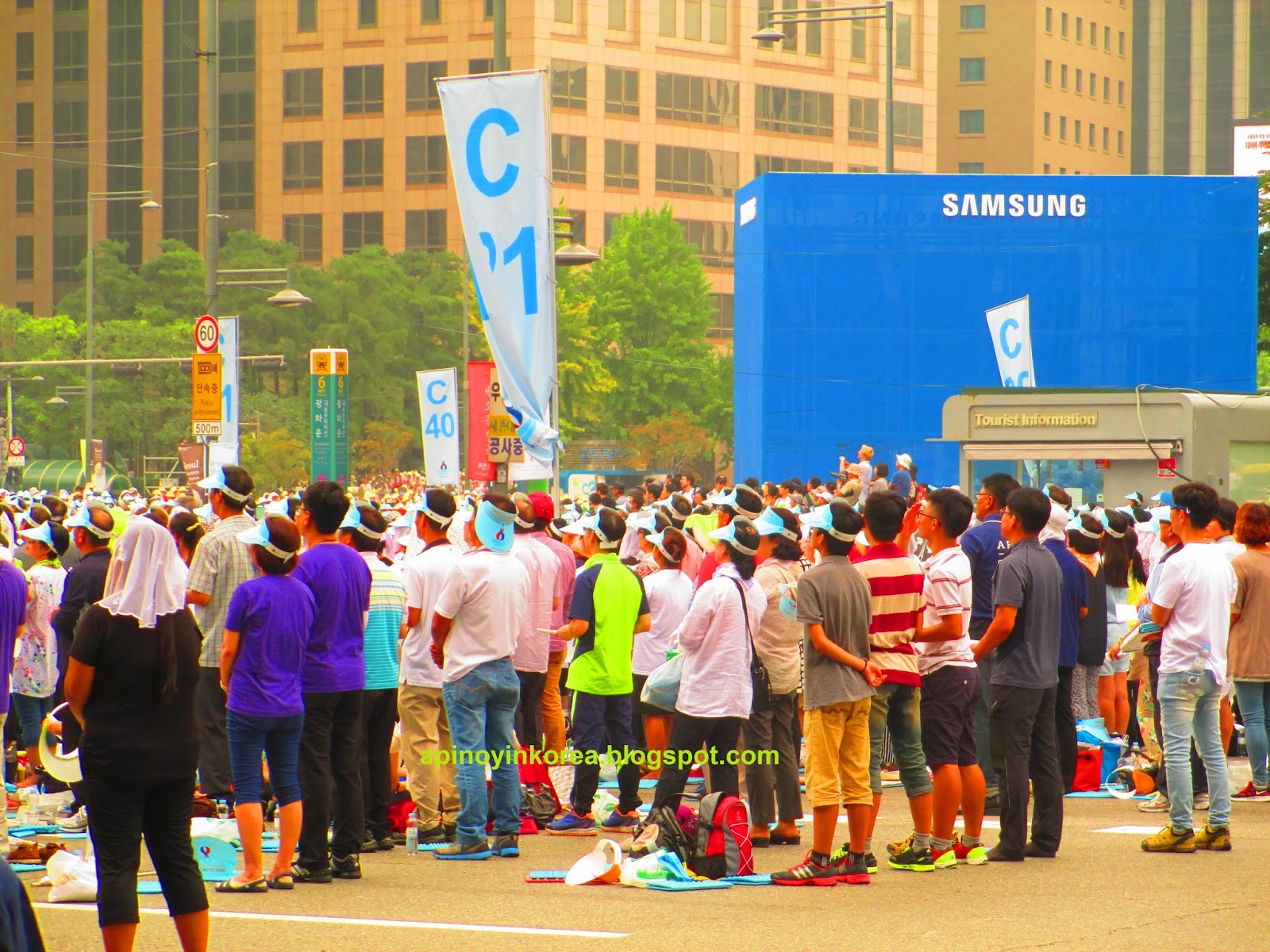 (People watching the Pope from
a huge TV screen)

When I got to Gwanghamun, it was almost 10AM and Pope Francis was already a few minutes into his beatification ceremony. I think I was in the area for a good ten minutes when the thousands erupted in a singular cheering and celebration, clapping and waving their hankies in the air. That was the moment Pope Francis declared and beatified the 124 Korean martyrs!  Paul Yun-ji Chung and 123 Korean martyrs, who were persecuted and died during the Choseon Dynasty in the late 18th and early 19th centuries, had just been declared by the Catholic Church as 'blessed'. 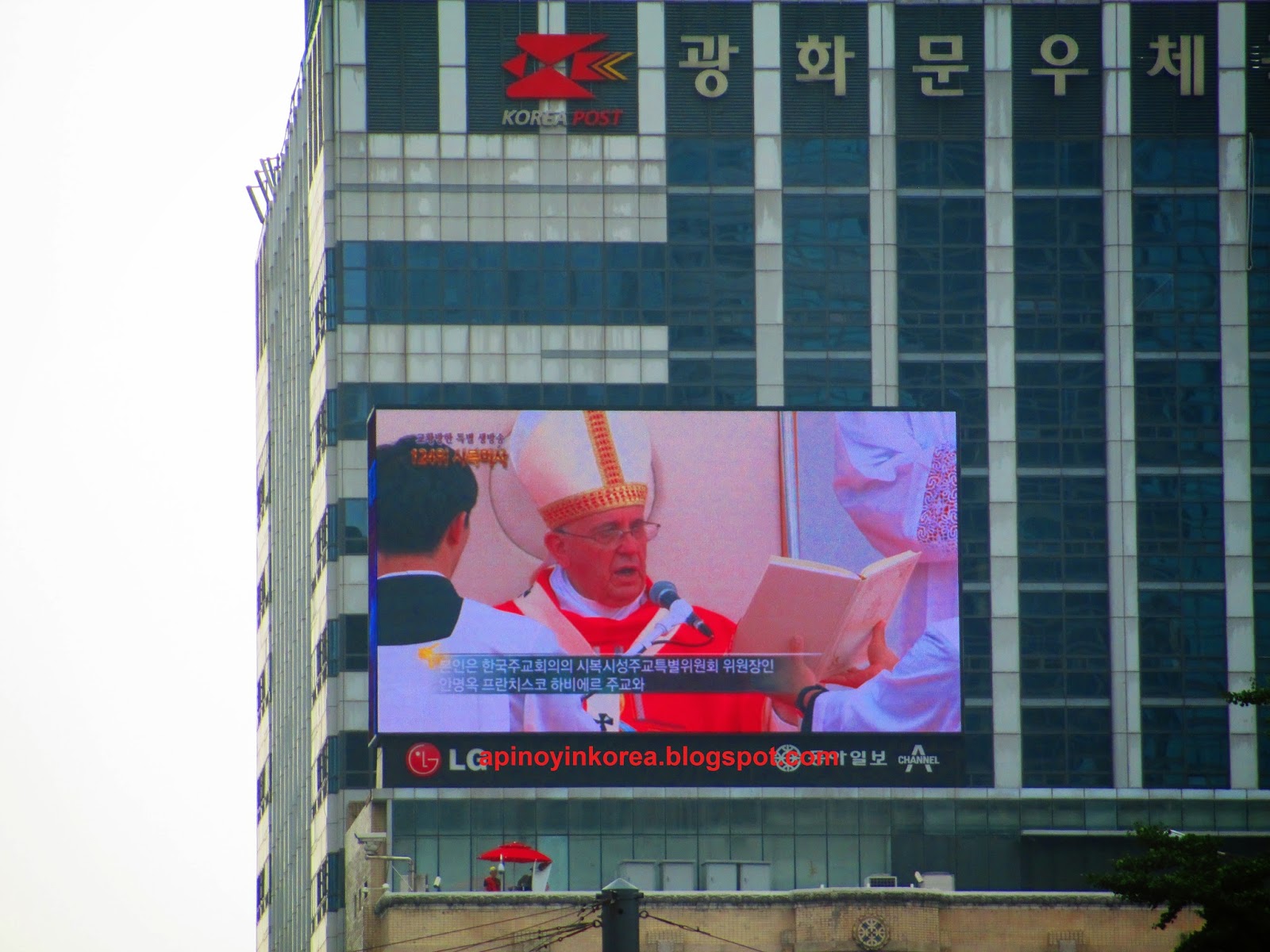 (As the Pope declared 'blessed' the 124 Korean martyrs... 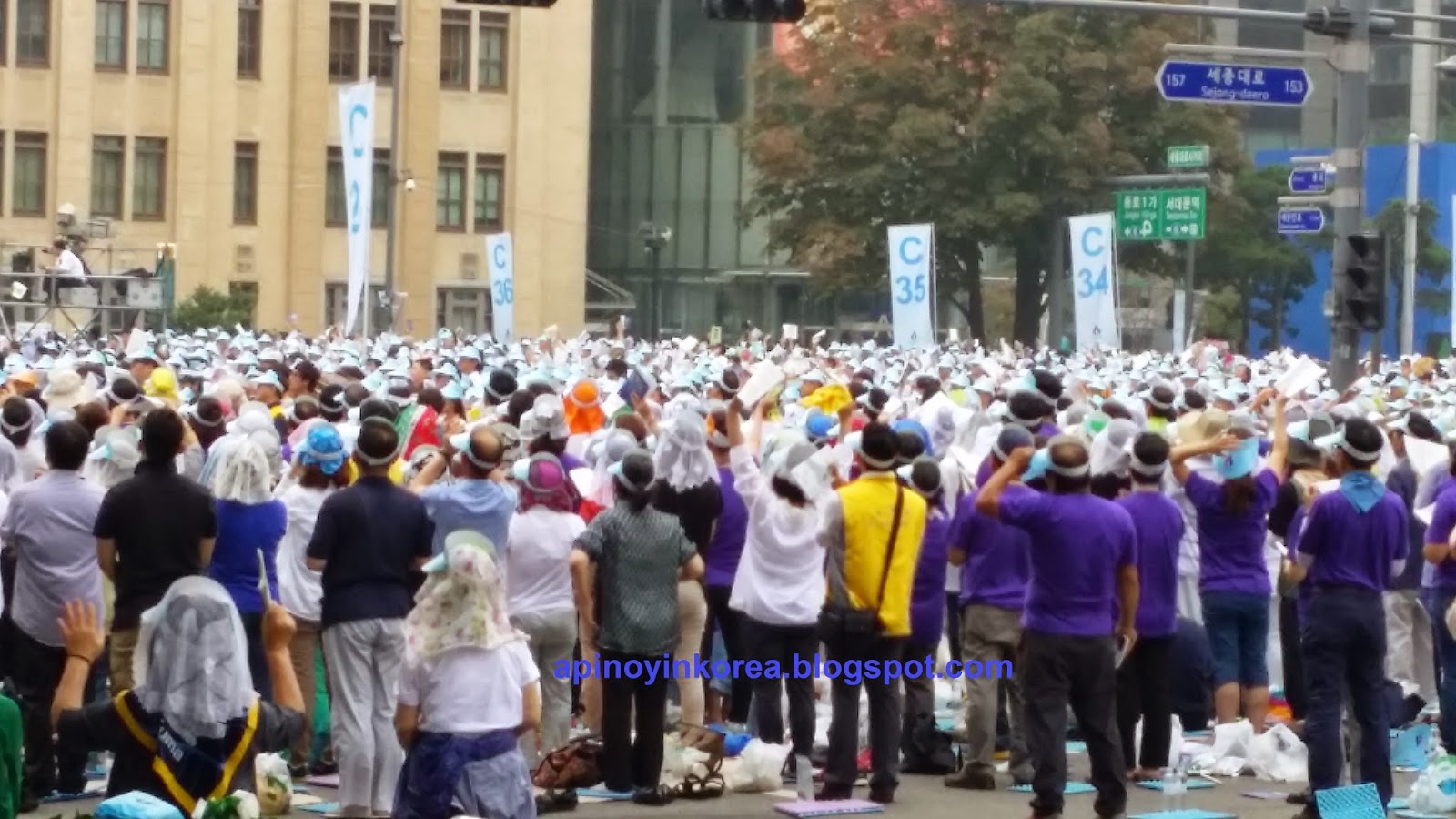 As I expected, the whole site was orderly with thousands of police and security making sure this part of Seoul was free from any nuisance that would ruin the event. Aside from the news of people fainting probably due to the summer heat, there wasn't much of a disturbance except for the one I witnessed by the entrance on the west side of the Square, where a Korean woman tried to barge in through the security, but was stopped. She lay sitting on the pavement wailing, but was appeased and carried to the next building. 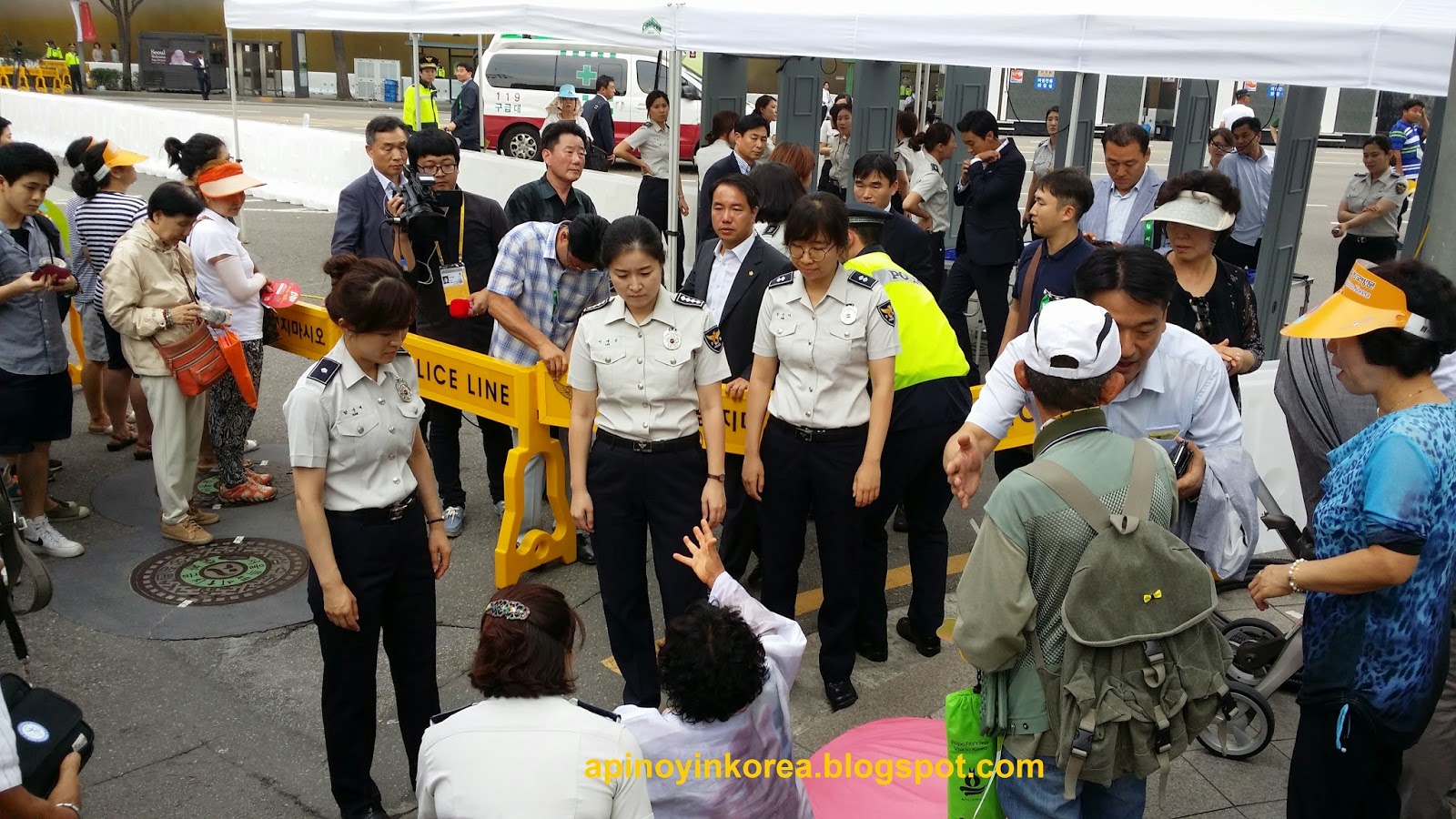 (A Korean woman wailing while
being watched by the police)

At the Seodaemun side where the road was closed, there was a big empty space that would have been available for people with no tickets to stand and watch. Had the organizers brought the barricade closer to the Square, a few hundreds could have watched the ceremony closer. 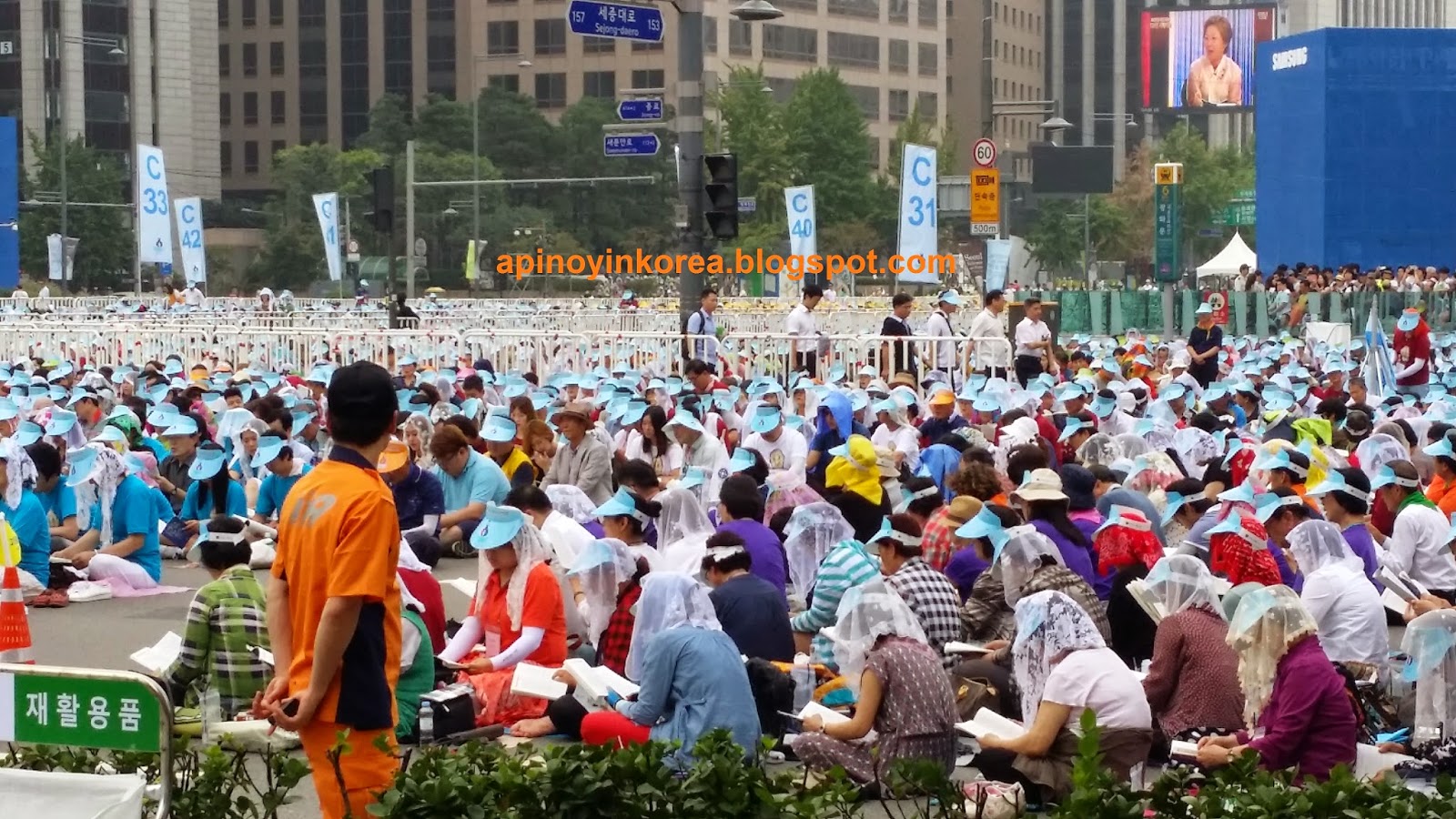 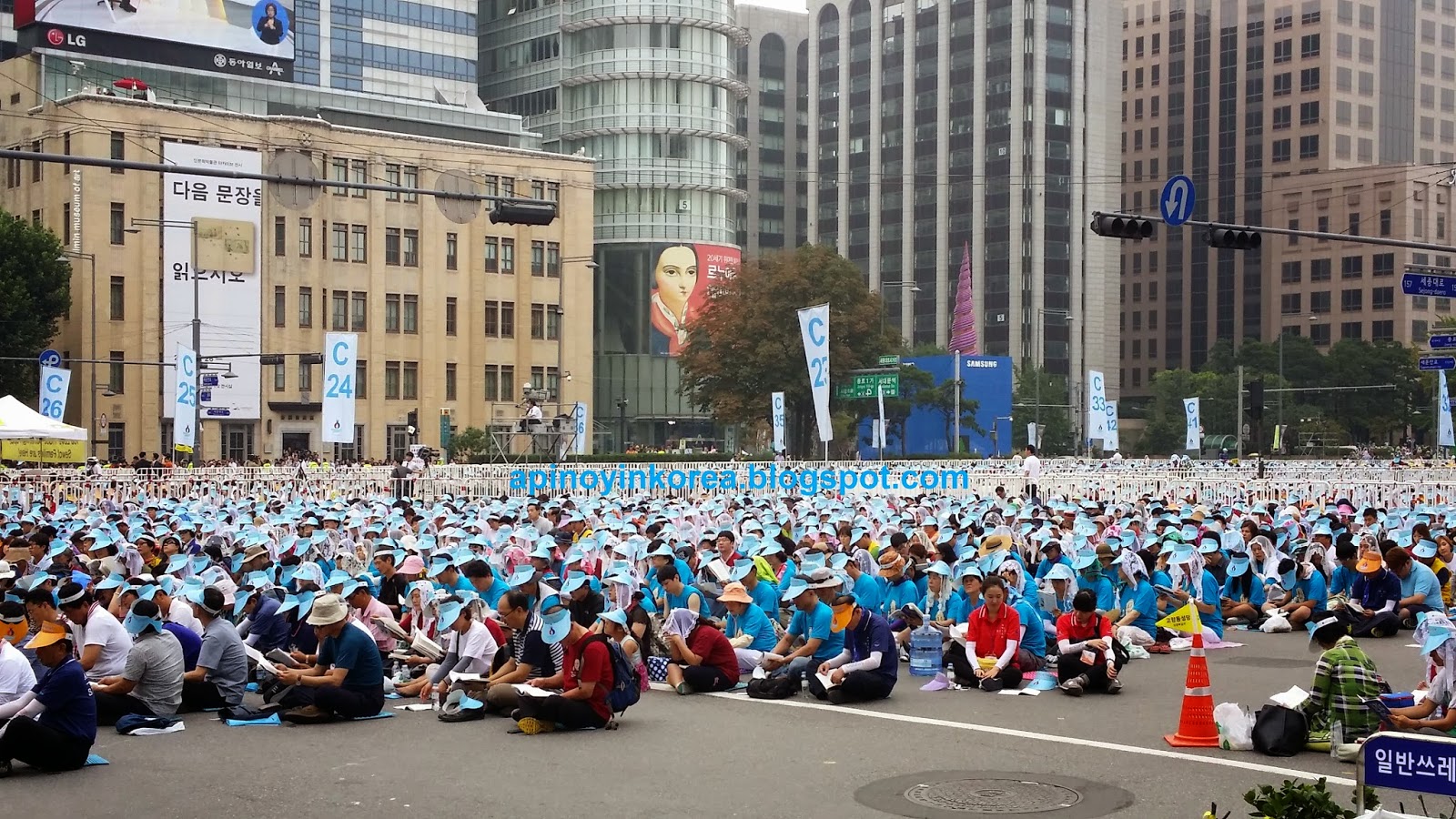 (Do you recognize anyone from the crowd?)

And speaking of being closer, I made my way closest to the Gwanghwamun Square through a small open passage for Catholics with no tickets next to the barricades at Exit 7 of Gwanghwamun Station. Across the street from where I stood was Kyobo Building, to my left was the proud statue of Admiral Yi and right behind me was Godiva Chocolates! This chocolate shop actually had a cafe on the 2nd and 3rd floors, which they opened to their customers. But watching from the inside, even in air conditioned room, would not be the same as being on the ground where you can hear everything, especially the choir that sang during the Mass. Their singing was remarkably good with soprano and tenor voices soaring above everyone else's. They must have picked the best singers and rehearsed weeks (or even months!) before the ceremony. I wondered in which parish that choir regularly sang. 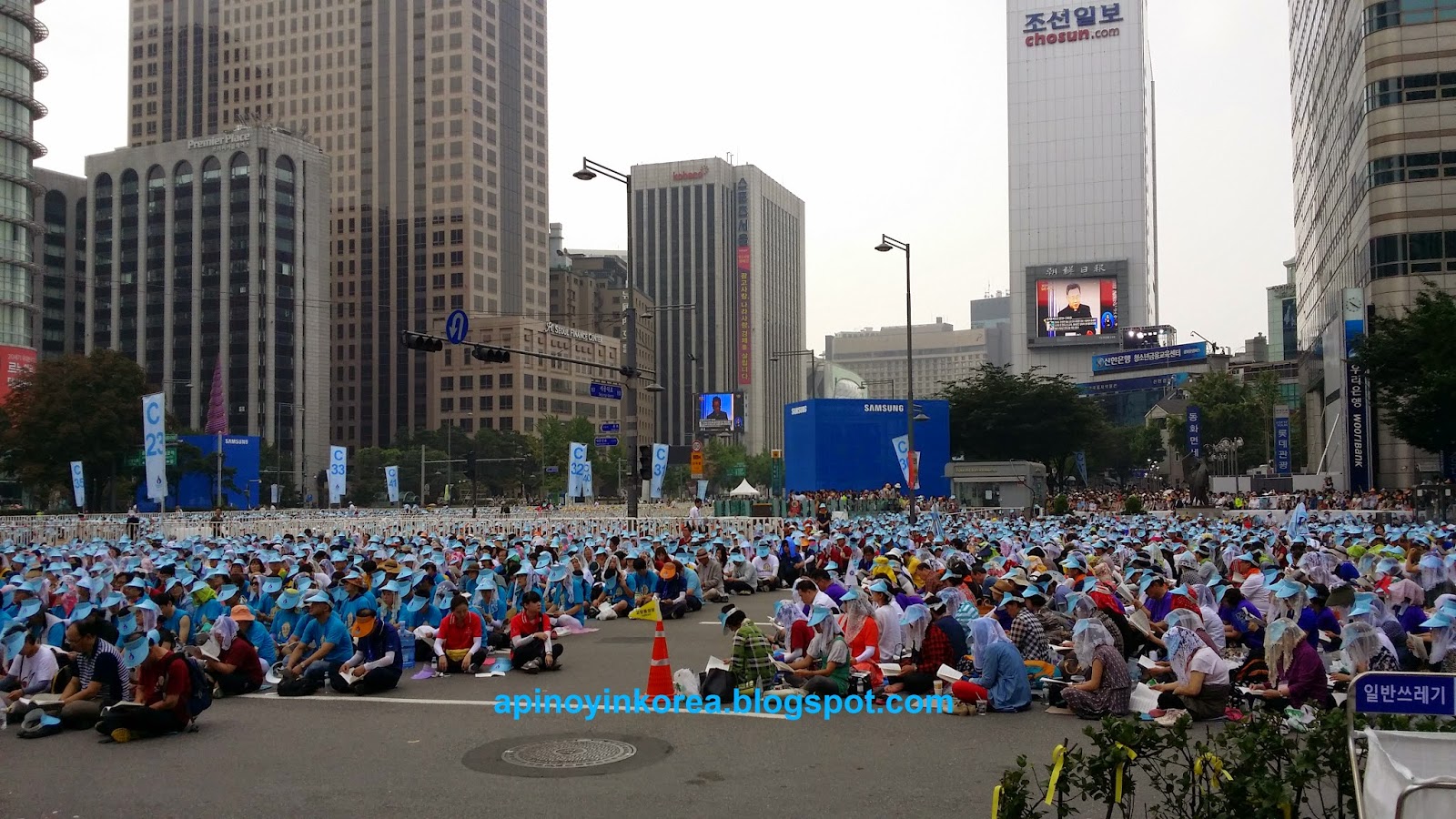 (A sitting sea of humanity) 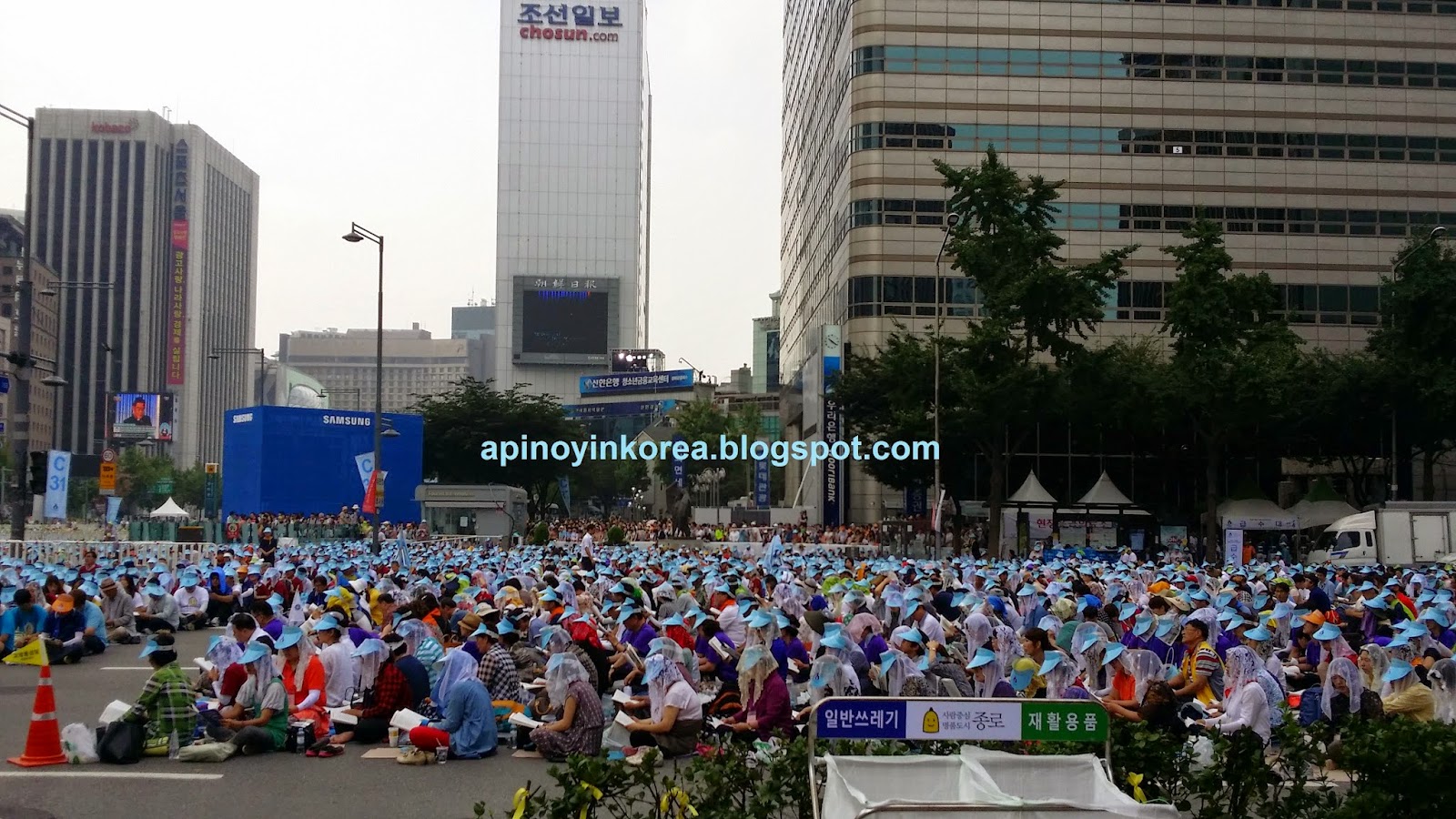 As I expected to stand at the site for hours, I brought almond bread from Taegukbang, my new favorite bakery, and a bottled drink in case I got a little hungry. But I worried about those people sitting on the pavement under the sun. I wondered if they had food with them, too. Most of them came from the provinces and nearby cities, and perhaps, even travelled through the night. And when my tummy started to grumble right somewhere between the offertory and the Lord's Prayer, I had to give in and started munching a piece of my snack, reciting the line, "Give us this day our daily bread". 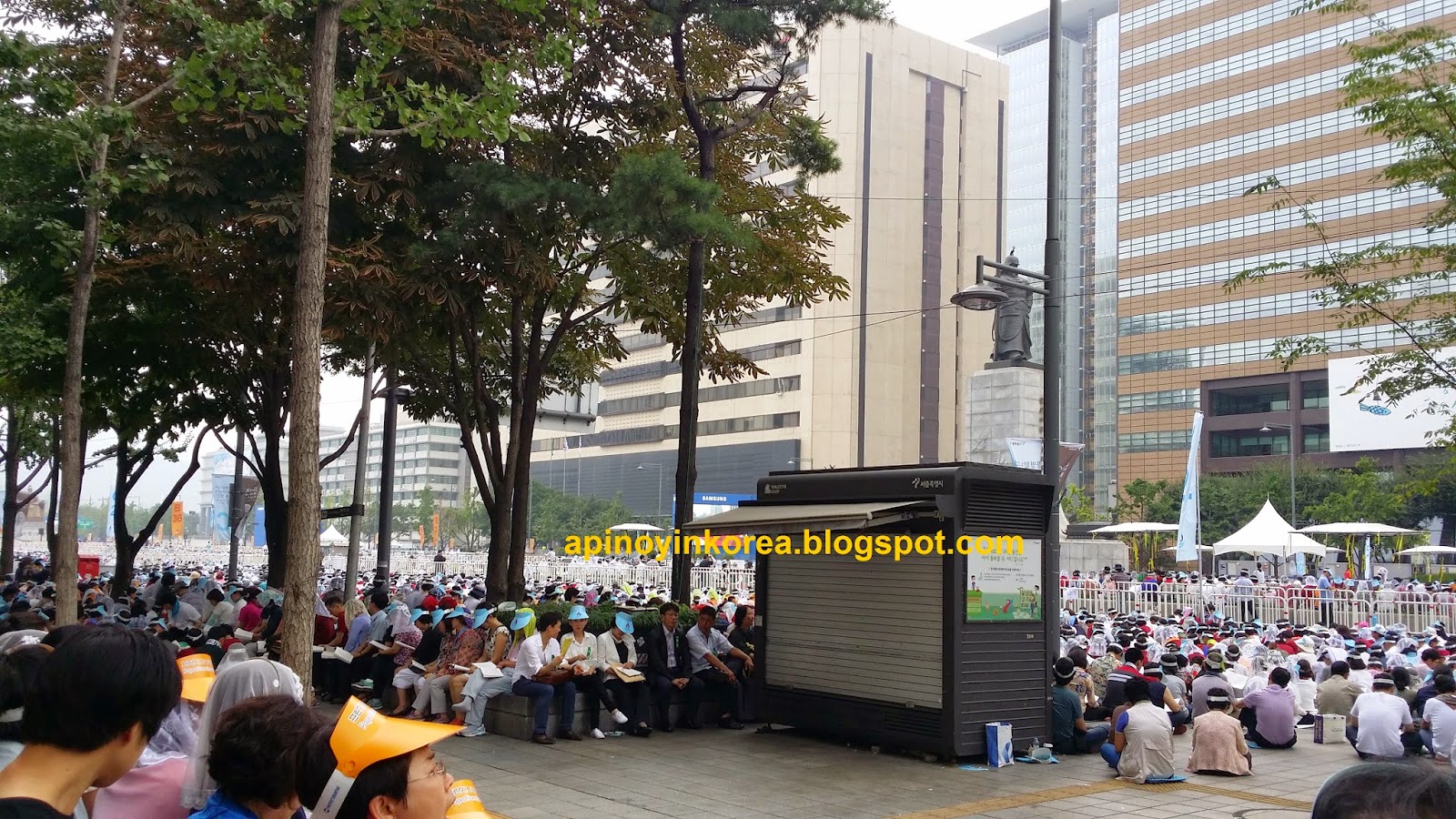 (I could see Admiral Yi from where I stood) 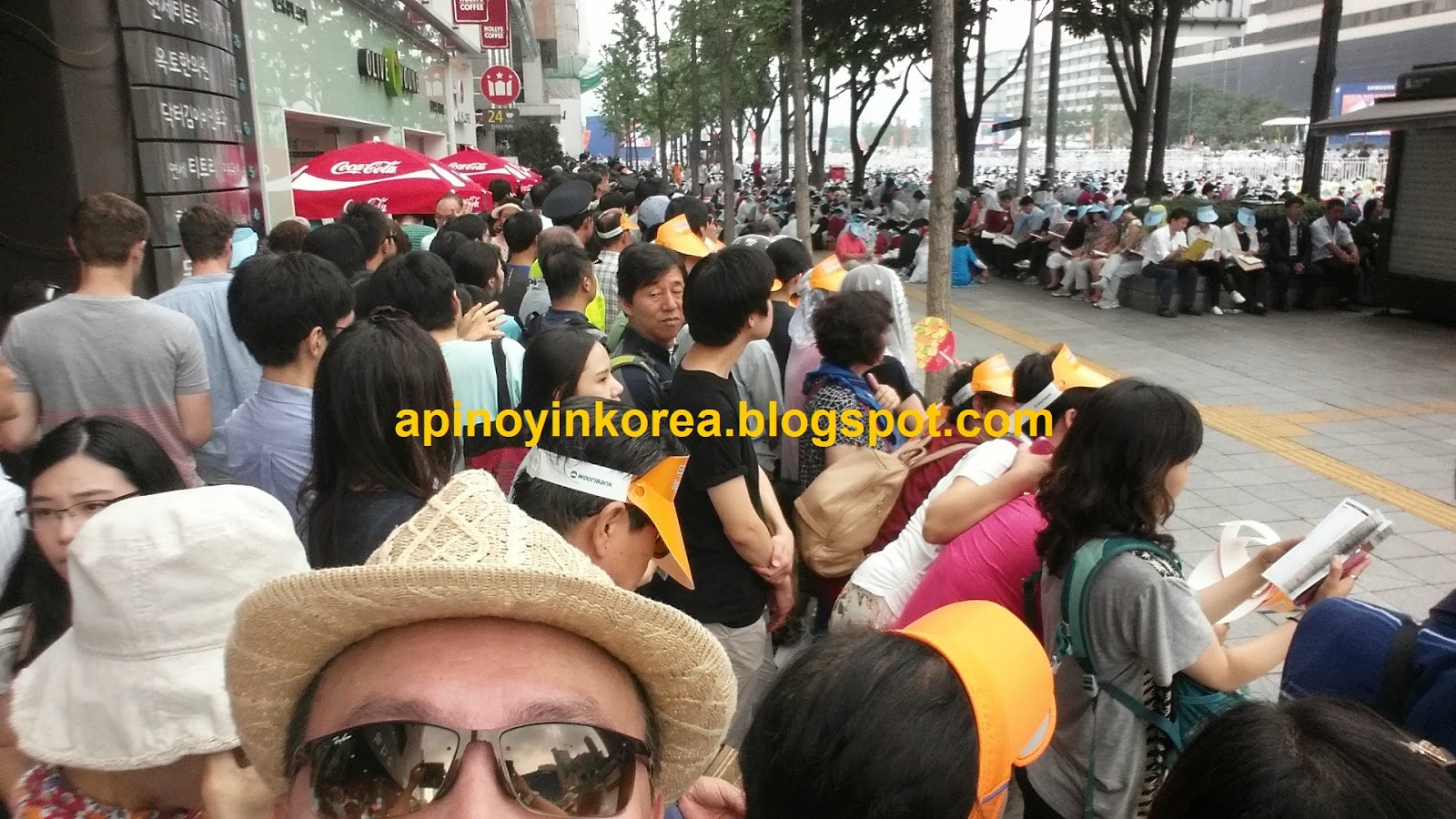 (The crowd to my left) 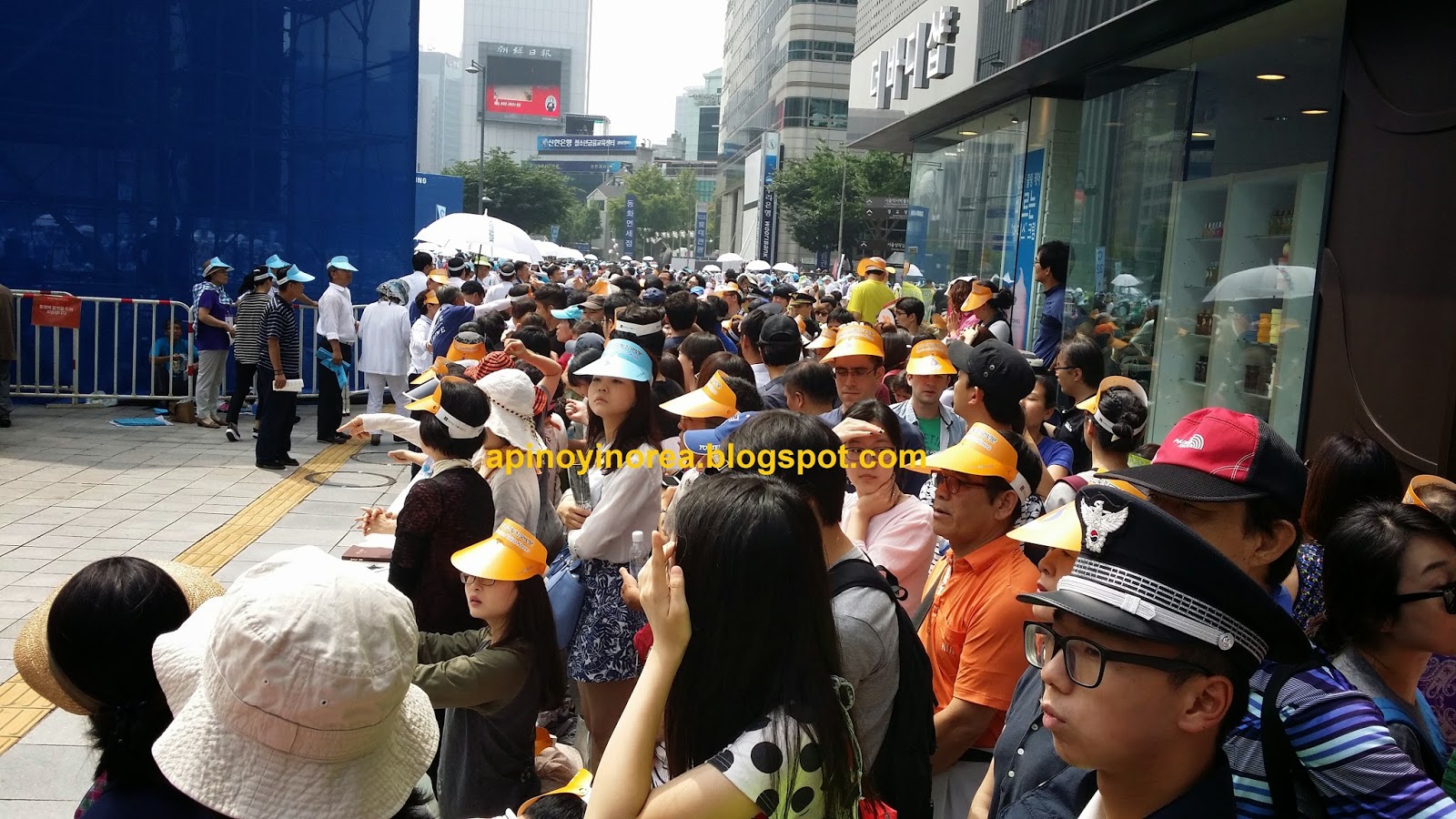 (The crowd to my right)

The skies were cloudy, making the temperatures tolerable. Although everyone attending was not allowed to bring umbrellas, when it was time for the Holy Communion, I saw white umbrellas lining up and made their way to the center. These umbrellas actually were carried by assistants to cover a lay minister who distributed Communion to the thousands. 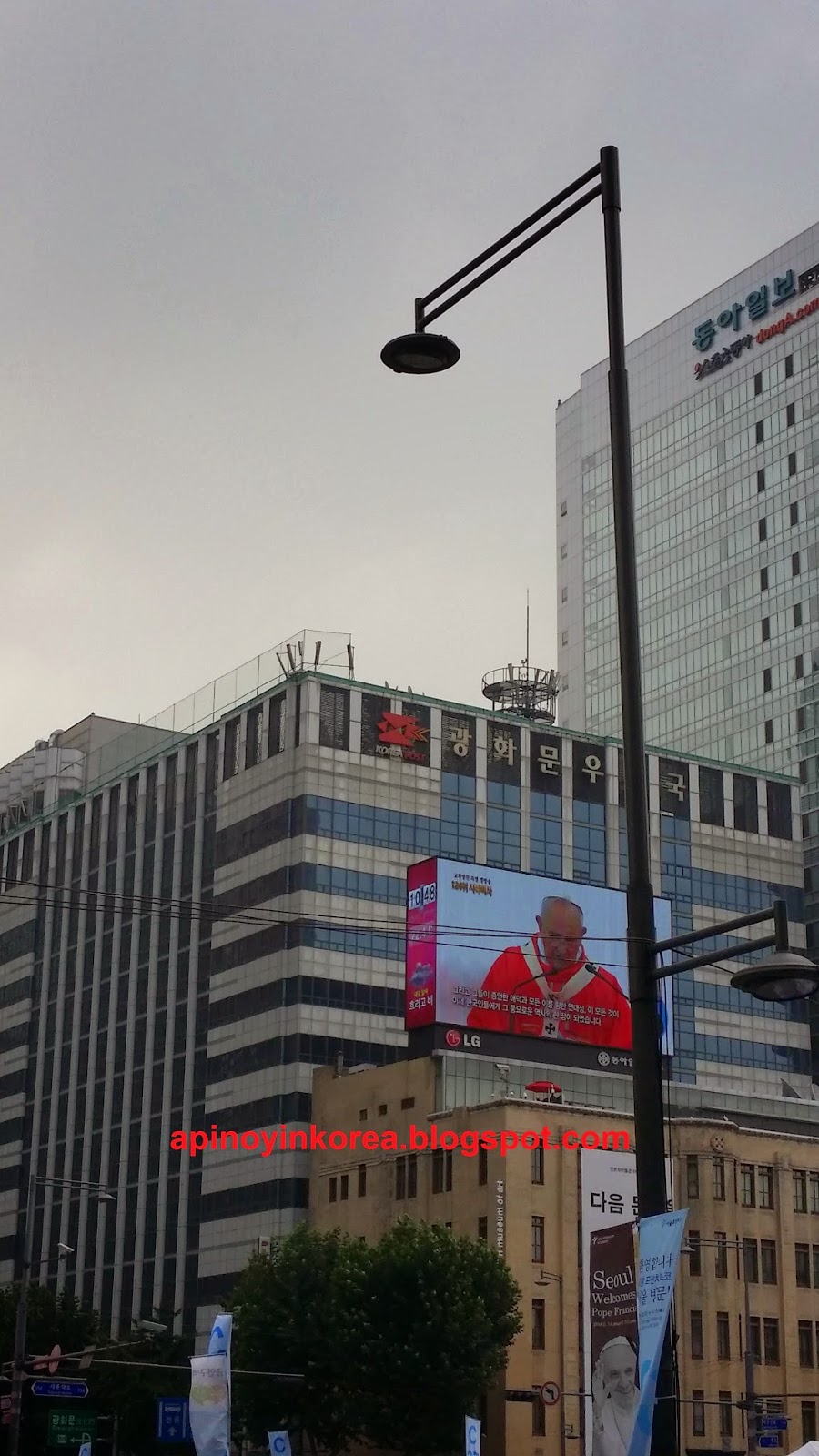 (The Pope on the screen in front) 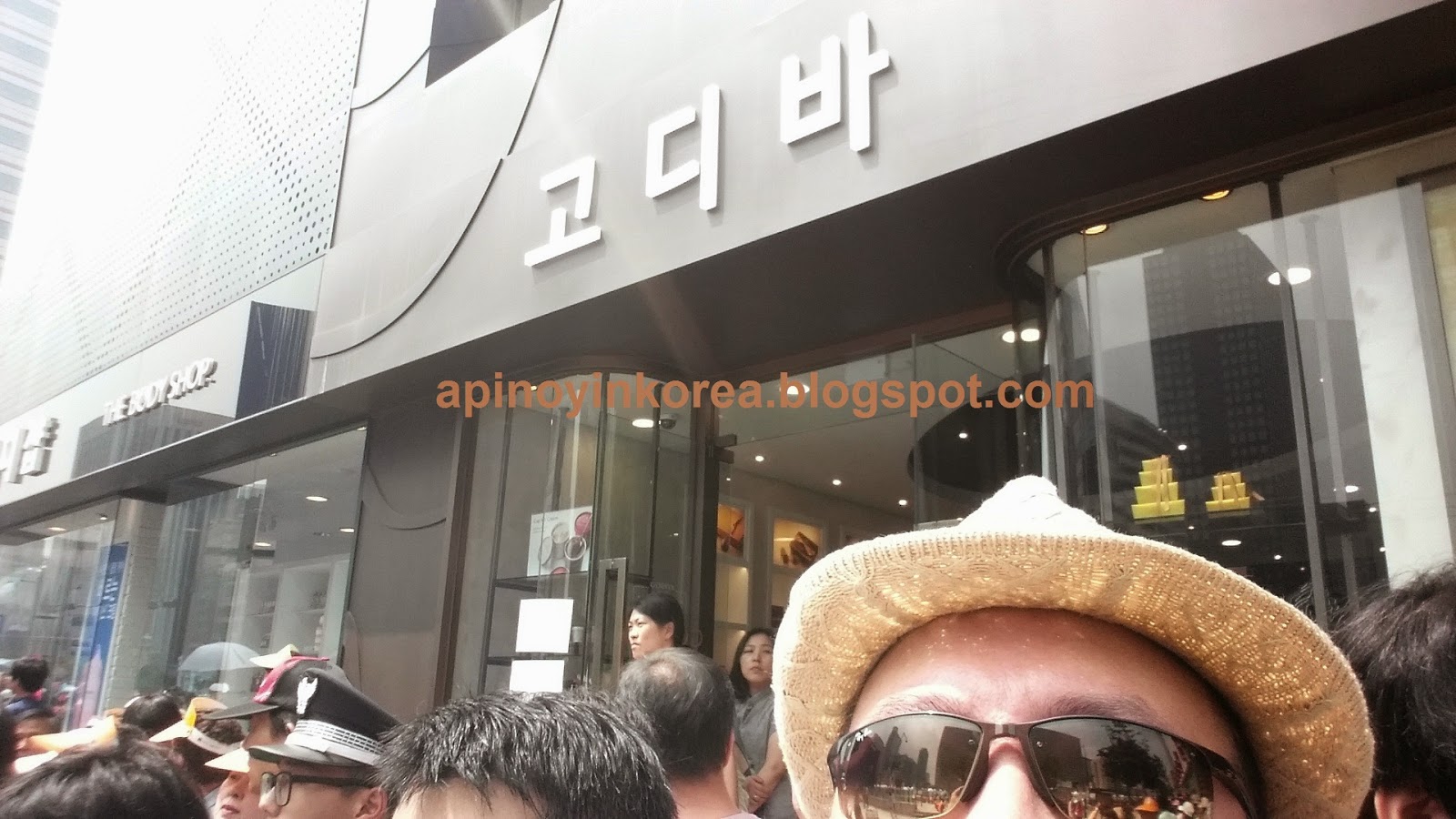 (And Godiva chocolates behind me!)

The attendees on our spot were lucky when two Catholic girls in front of me frantically waved to the lay minister to draw attention to the faithful (and sinners!) in our area, just like fans do when watching their favorite k-pop band on stage. But unlike k-pop bands who ignore the screaming fans and simply concentrate on their choreography and lip-syncing, the lay minister went straight to us! It turned out, most lay ministers gave communion even to those outside the barricade!  After receiving the Communion, I immediately realized that this was the highlight of my attending the beatification. Even though I didn't have a ticket and didn't have to wake up early, I was able to celebrate the beatification, hear the papal Mass and even receive the Holy Communion! I guess I was also 'blessed'! Perhaps Pope Francis could add one more non-Korean martyr to the list! Ha-ha-ha! 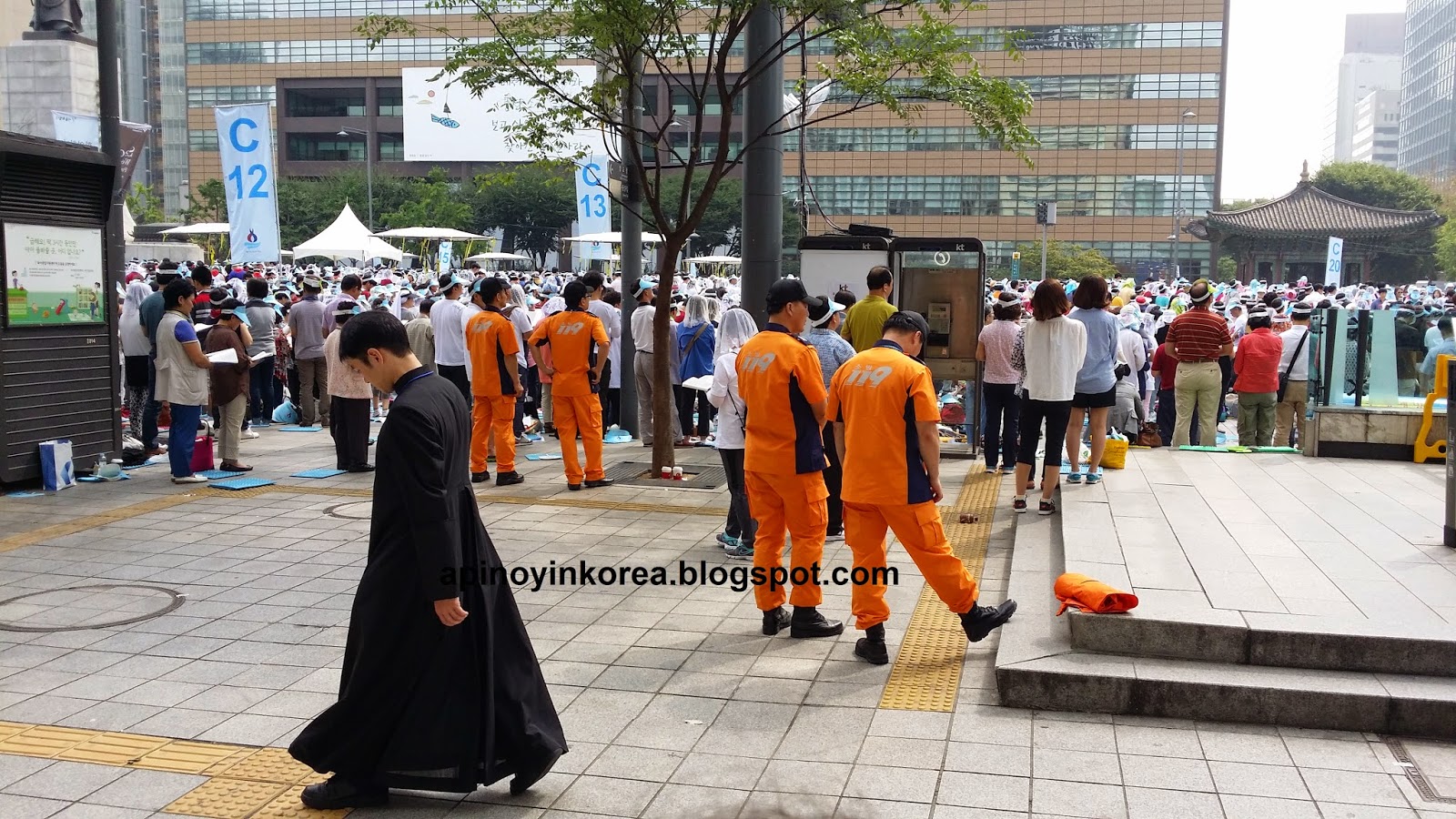 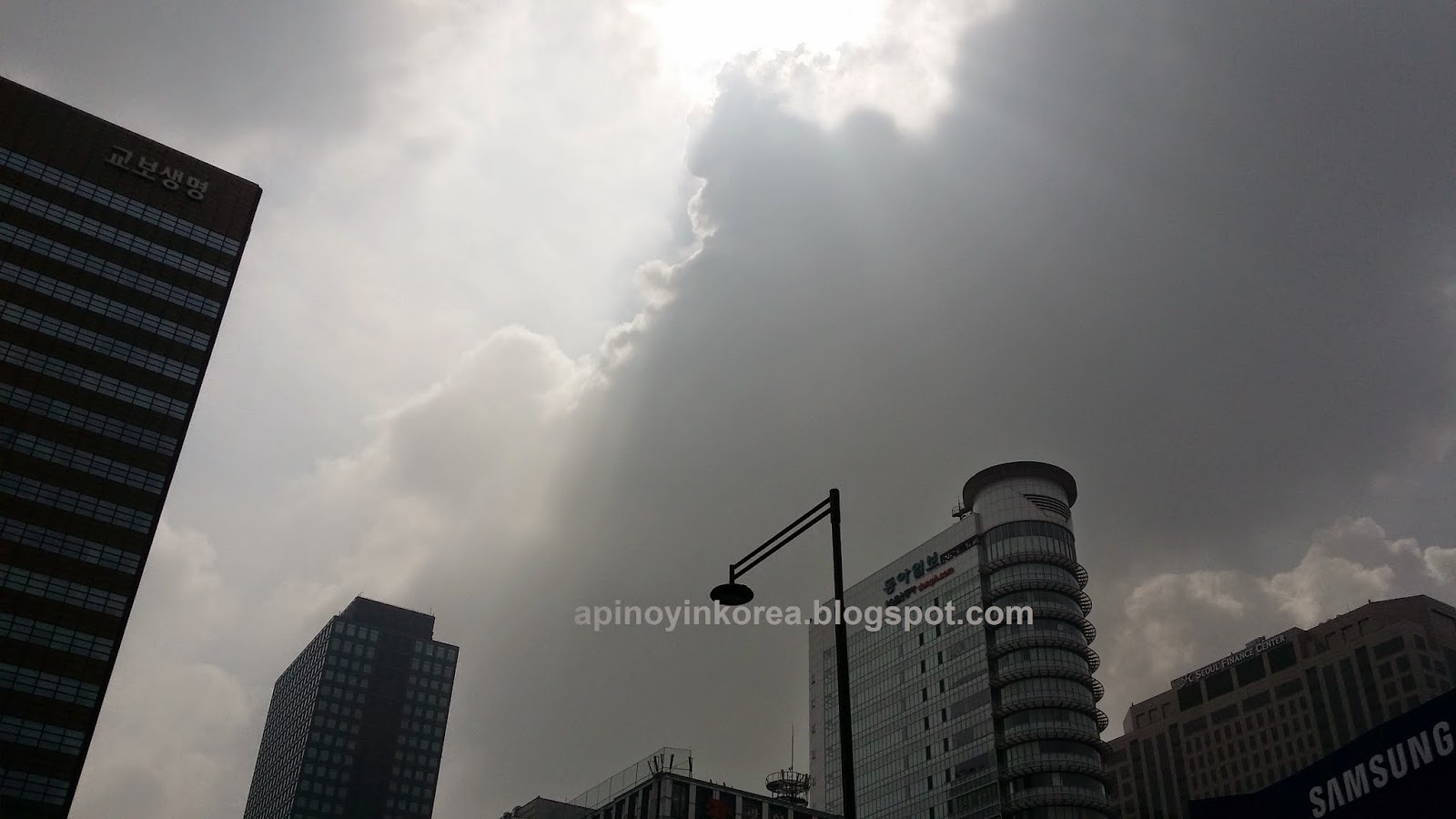 (The skies opened for some rays of light!)

And it was all over by noon time. The whole beatification was a success from many angles. From the campaign of the Korean Catholic church for the beatification of the 124 Korean martyrs, to the staging of the ceremony right in the middle of Seoul that required a lot of planning and preparation by the Church, the national police and the city government, to the selection and distribution of the thousands and thousands of tickets, and a lot of other things that weren't obvious on site and on the TV screens. 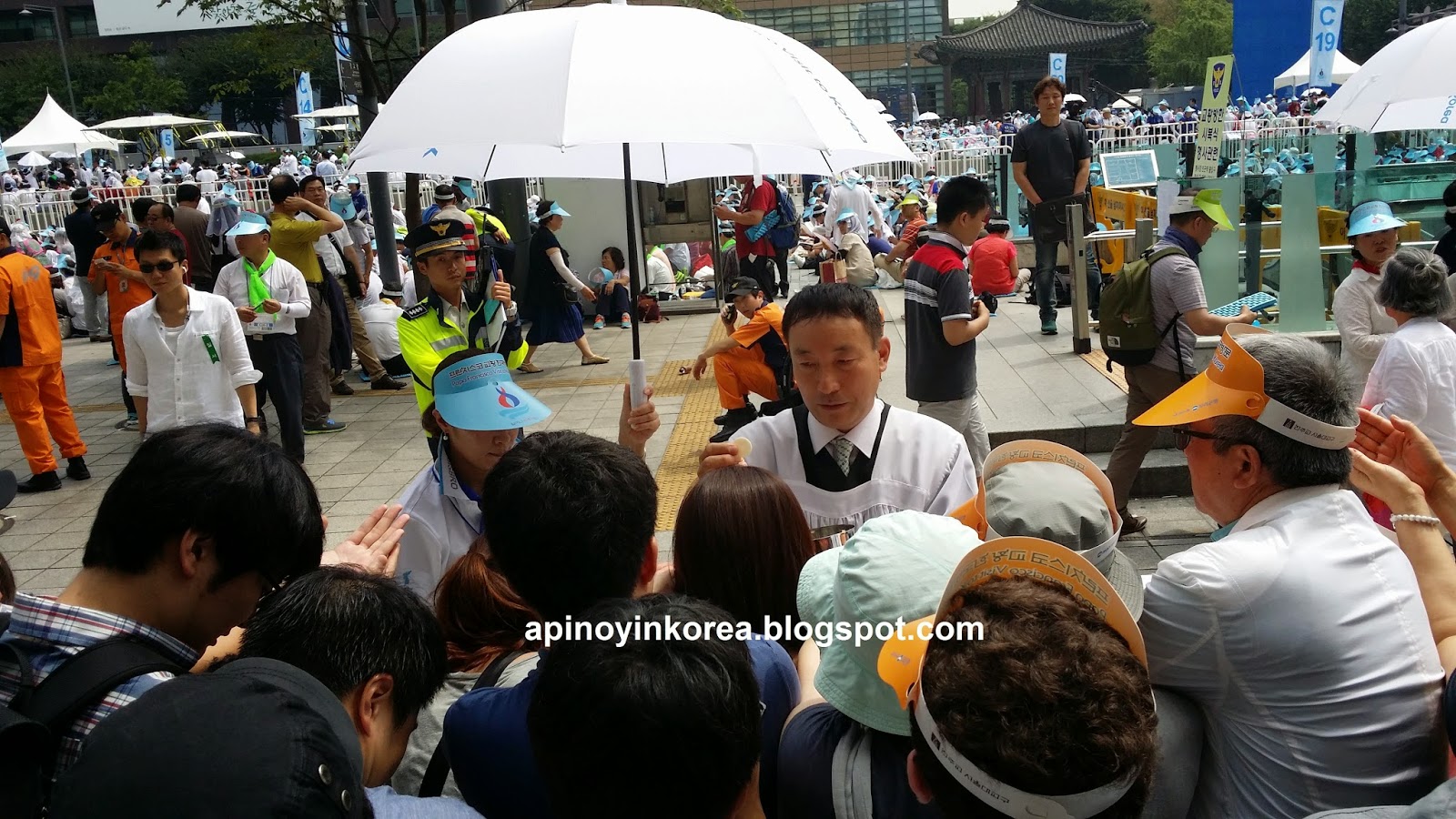 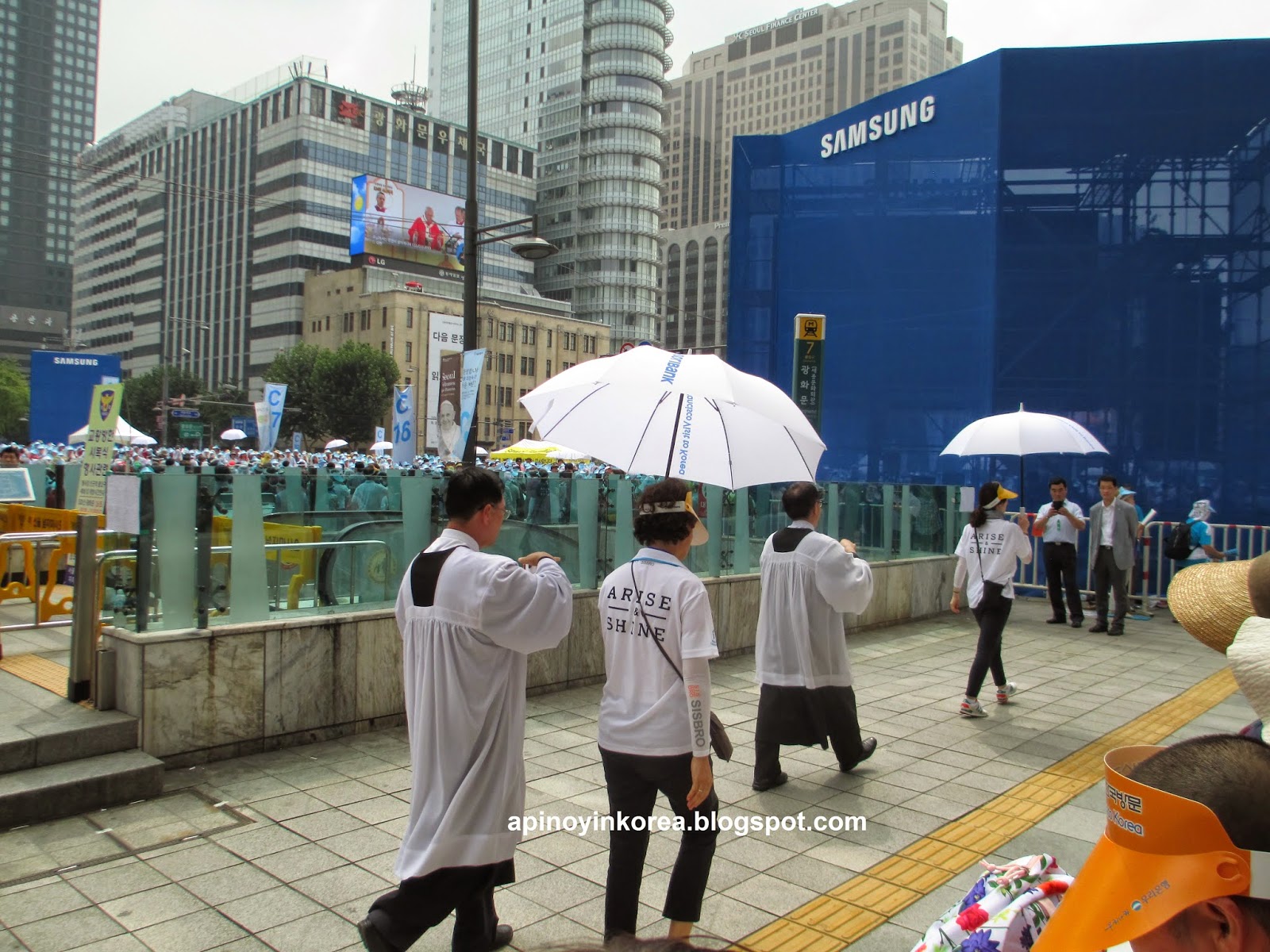 Let's count in some miracles like the weather. It wasn't that scorching with some grey clouds shielding the thousands from an otherwise intense sun. And it didn't rain that day; only the day after! 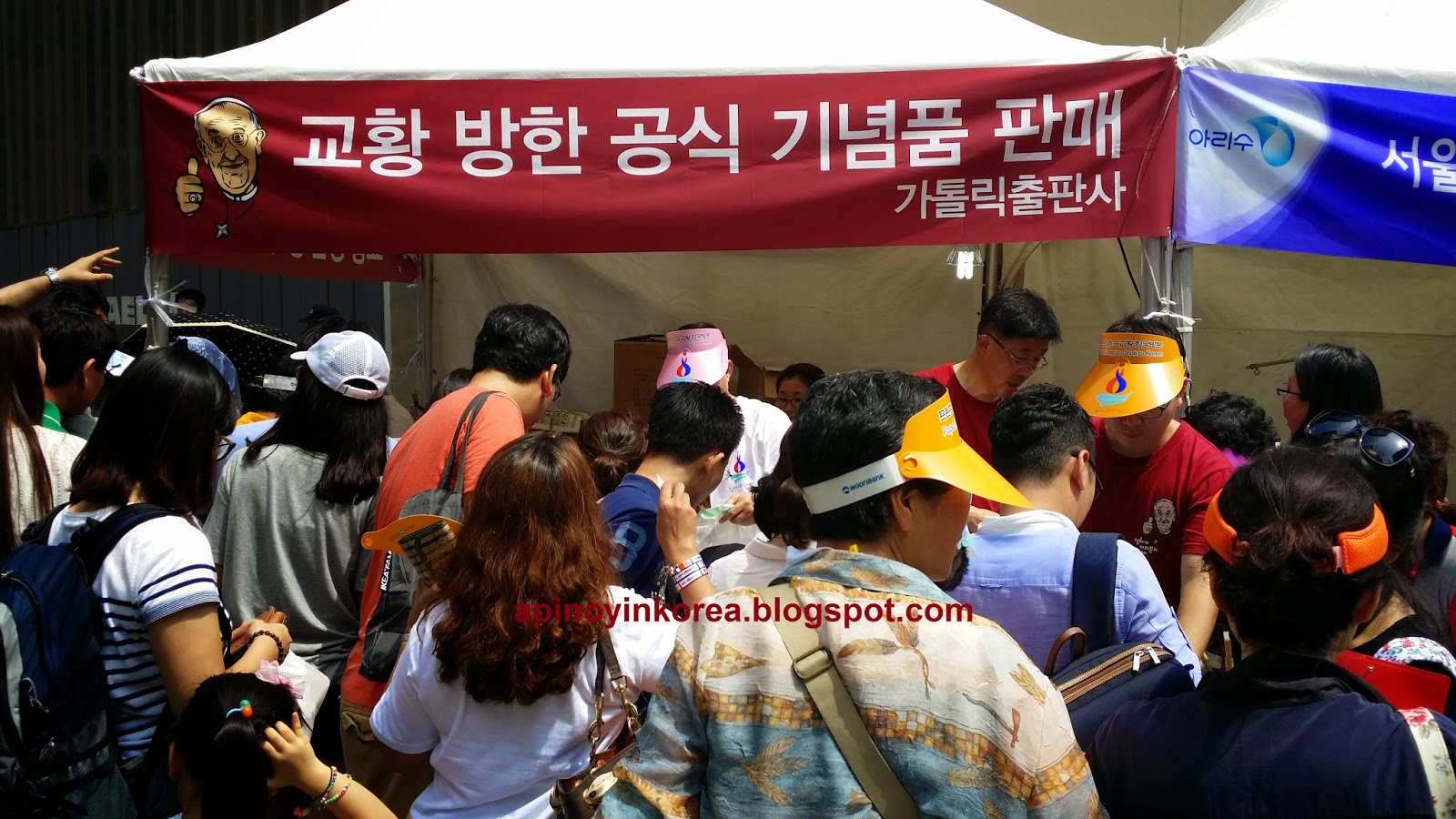 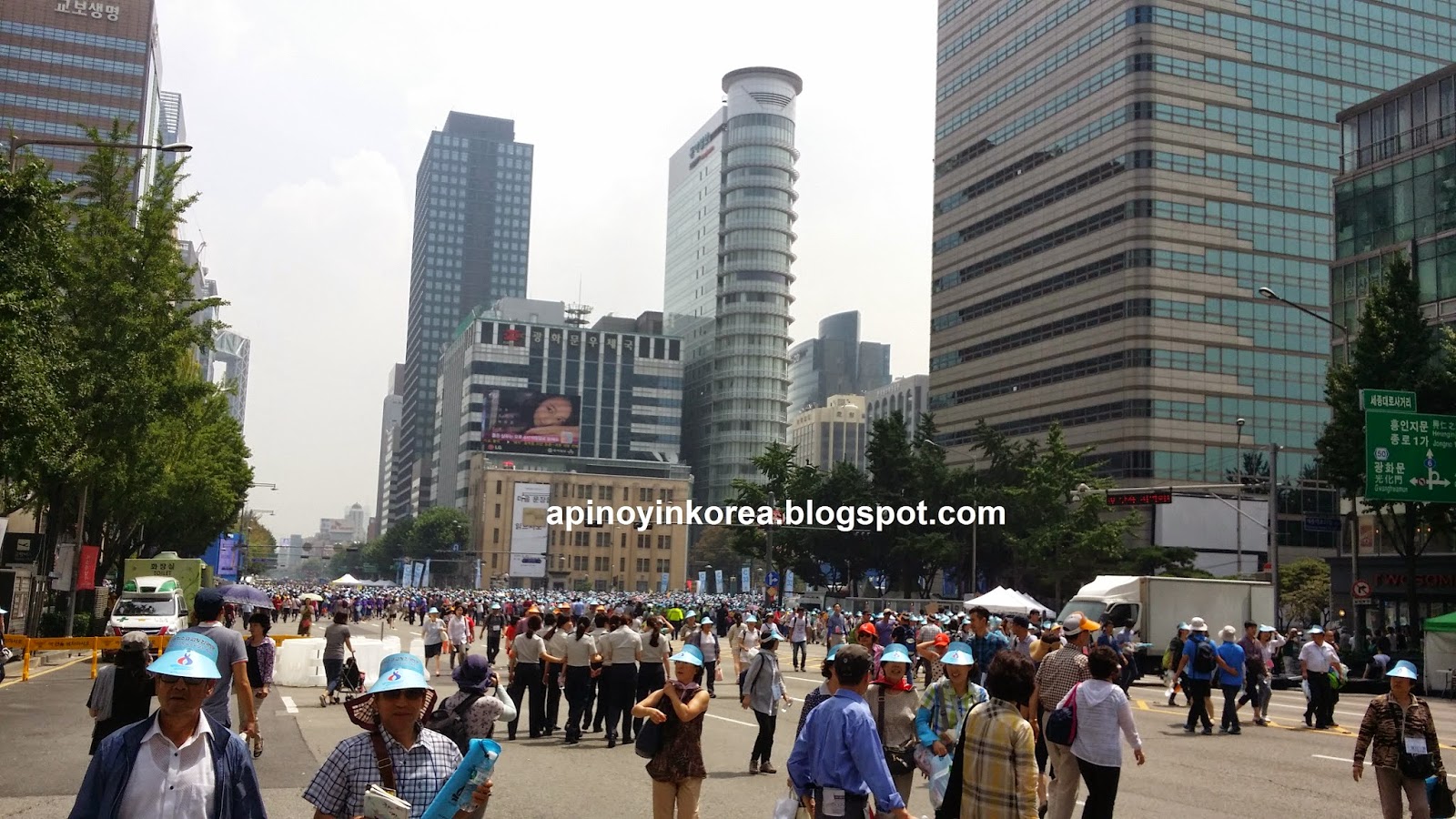 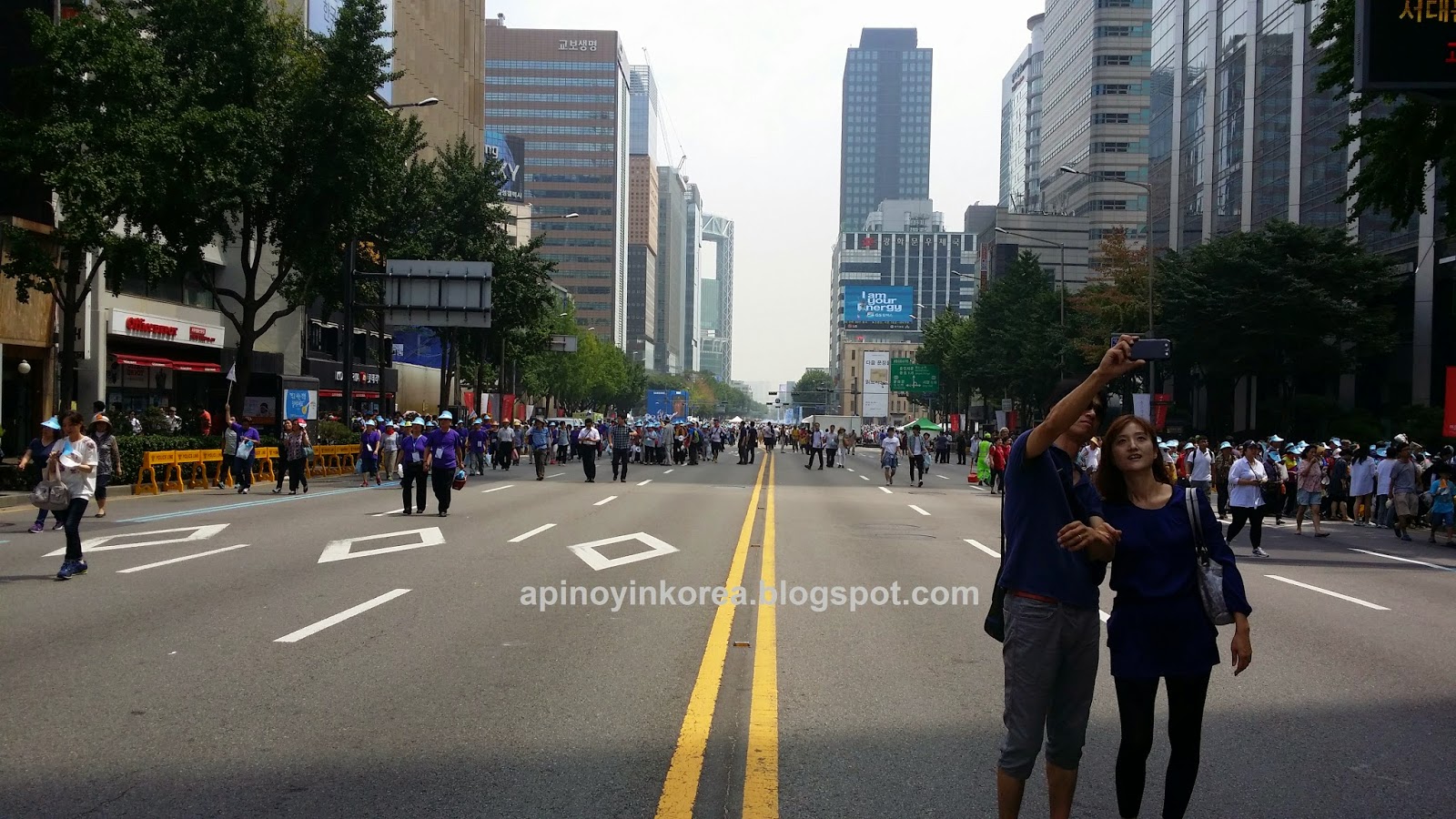 (The Mass is ended. Go and selfie.) 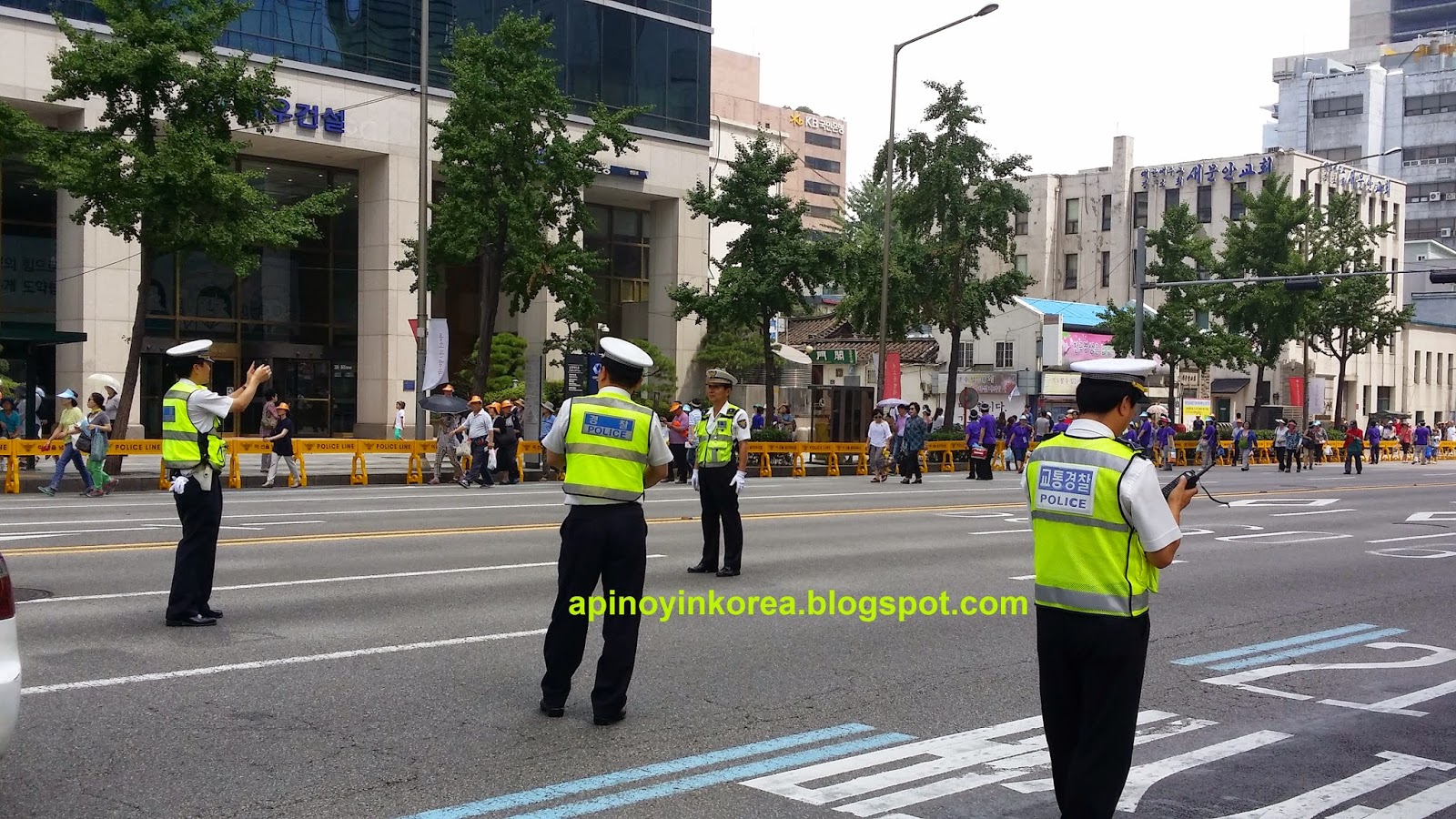 (Even the police wanted a photo)

Two nights before the beatification, I actually went to Gwanghwamun Square to see for myself the preparations that were going on. Today, I considered myself lucky that I was one of the thousands who had the chance to attend it and even participate in it. I actually didn't need that ticket after all. I guess I just needed some wise transport planning, a bread and a drink, and a miracle or two. 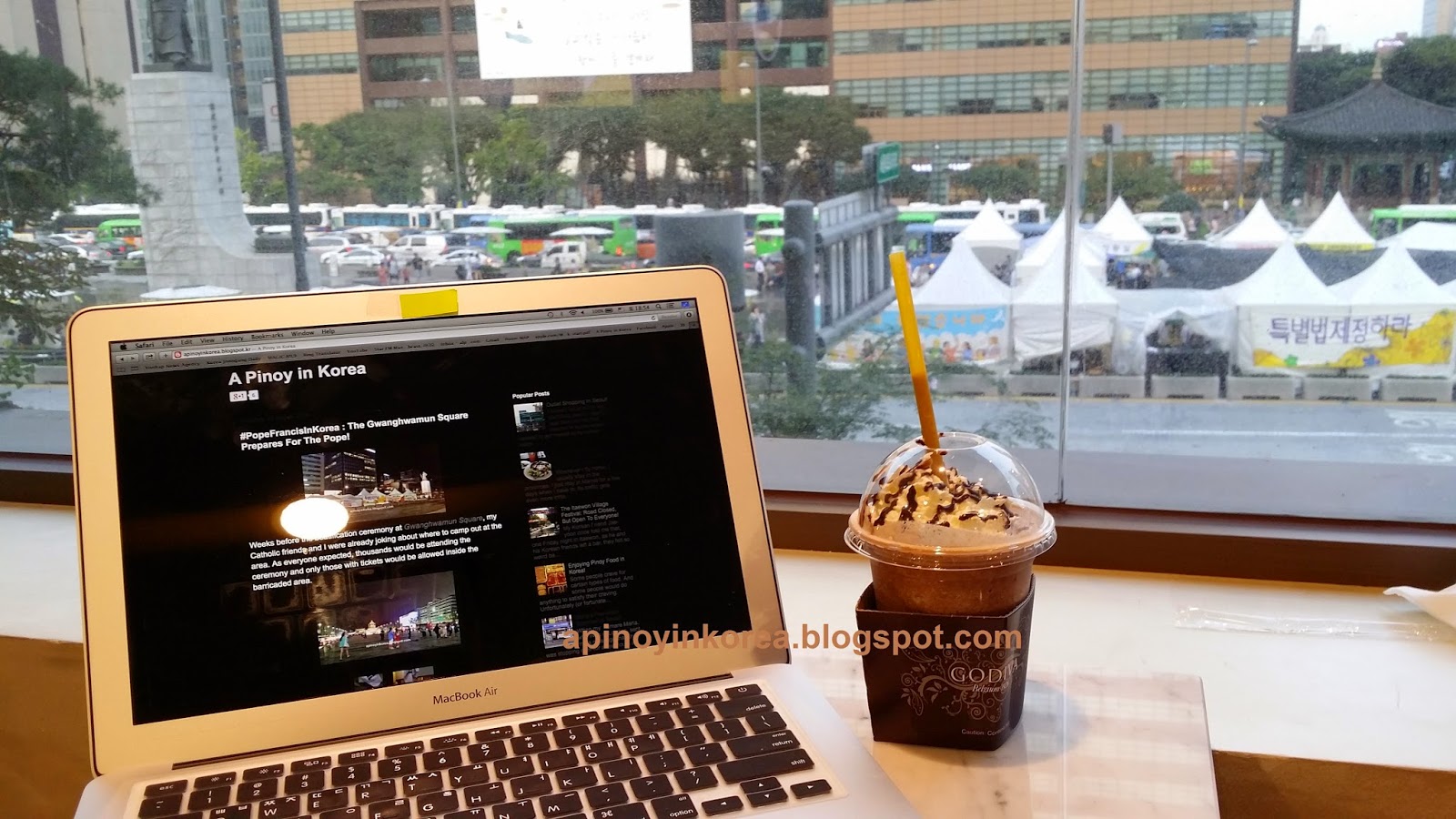 One week after the beatification, I went back to the Gwanghwamun Square. To write this blog, I visited the Godiva Chocolate shop, and got a seat next to their 3rd floor window. My spot during the beatification was right in front of this shop. At the cafe, I thought, with the Pope gone now, it was time to sin with Godiva's dark chocolate decadence! But having attended his beatification ceremony, I'm sure he'll forgive me. :-) 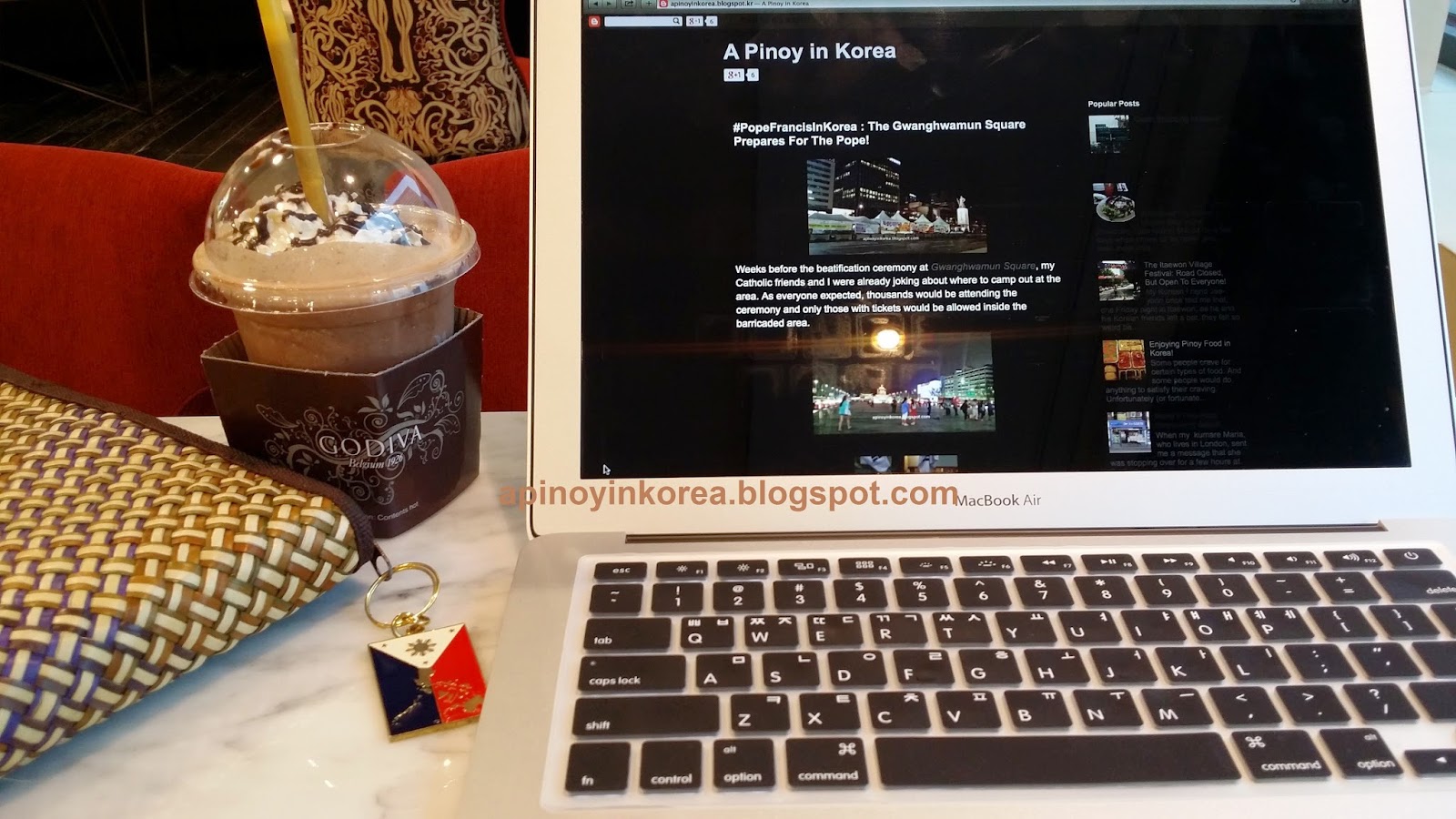 (My sinful Godiva chocolate drink
and my written confession)
Posted by Alphonse at 19:01